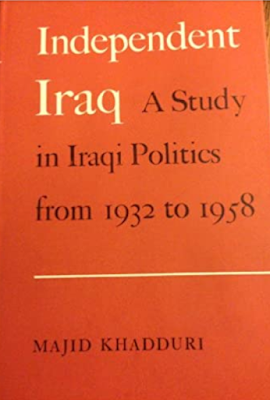 Majid Khadduri was one of the first prominent Western writers on Iraq. He was born in Mosul and immigrated to the United States where he became a professor at Johns Hopkins University. His work was some of the most detailed on Iraq at the time owing to his extensive research and his connections with many leading politicians who gave him an inside view of how the government worked. Independent Iraq 1932-1958 is a perfect example of this access. At the same time his closeness to the elite meant that he often presented their point of view uncritically.

An example of Khadduri’s powerful sources was his discussion of the 1936 coup the first in the Arab world. The author was able to interview two of the surviving politicians who were at the Royal Palace with King Ghazi when Prime Minister Taha al-Hashemi decided to resign. He was forced out by General Bakr Sidqi who promised he would not be involved in politics after the coup. The liberal Al-Ahali aligned with the general as well with some major reservations fearing military rule might be the ultimate result. The British also got involved with its ambassador telling the king to order the army to stay out of government affairs. Defense Minister Jaafar al-Askari tried to sow dissension within the army to foil Sidqi and was assassinated as a result. It’s these kinds of blow by blow portrayals of major events that makes Independent Iraq a must read for historians. He was able to talk with all kinds of politicians and military officers and put their stories together into a unified narrative about Iraq under the monarchy. Few others were able to present this kind of coverage in English to the Western world.

It was the author’s analysis that was up and down and provides the one downside of the book. On the one hand, Khadduri criticized the elite for how they ran Iraq. They fixed elections for instance and constantly shut down the press and put opposition leaders on trial. The author called it an oligarchy of elder politicians that controlled the country despite it having the veneer of democracy. Other times his assessments fell short such as when he praised the Development Board created in the 1950s to spend oil revenues. It funded huge projects such as flood control and dams. He missed the fact that this benefited the landed elite who were a part of the oligarchy he complained about. At the end he also claimed Iraq’s Sunni-Shiite and Arab-Kurd-minority splits prevented a dictatorship from being formed because no individual could control such a diverse and divided group of people. He was completely wrong as Iraq fell under autocratic rule from 1958-2003. Part of the definition of a dictator is someone that rules through force and fear and that meant they could attempt to suppress and exploit the ethnosectarian differences in the country which is exactly what happened.

Majid Khadduri’s Independent Iraq 1932-1958 is still one of the basic books to read if interested in the history of the country. His writing on Iraqi politics is one of the best despite the flaws in analysis. It’s the reason why you find him in the bibliographies of most books about Iraq’s past.