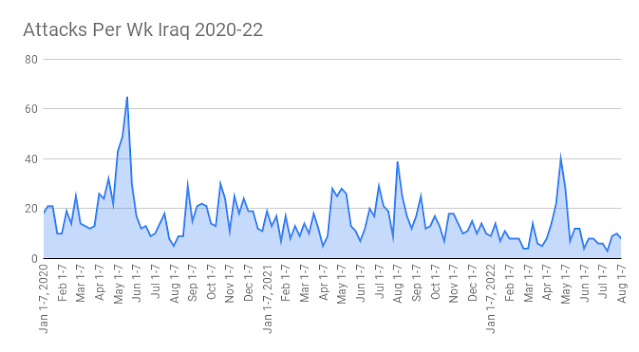 Security incidents declined in Iraq during the first week of August. There were fewer operations by both the Islamic State and pro-Iran groups.


There were a total of 9 security incidents reported in the media in Iraq from August 1-7. That compared to 18 the last full week of August and 11 the week before that. 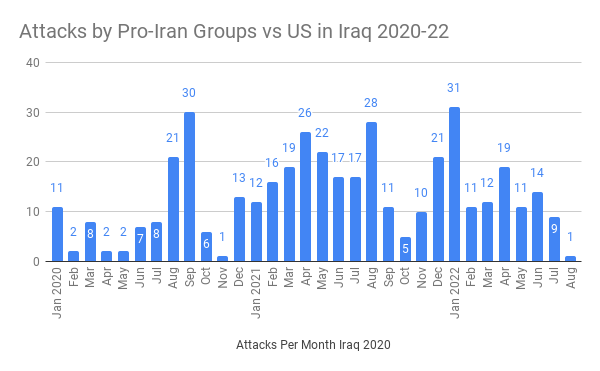 A pro-Iran group set off an IED outside of a Turkish owned mall in Baghdad. This was the latest in a slew of attacks by these factions against Turkish targets after Ankara launched a strike in Kurdistan that killed several civilians. Hashd factions claim they are standing up for Iraqi sovereignty plus it gives them a rational to continue to exist and carry weapons.

6 people were killed and 15 were wounded during the week. 1 civilian and 5 members of the Iraqi Security Forces (ISF) lost their lives while 3 civilians and 12 ISF were injured. Diyala had the most casualties with 10 followed by 7 in Kirkuk and 4 in Salahaddin.

There were three shootings in Diyala. One was an ambush at a checkpoint that was followed by an IED aimed at reinforcements that arrived. In total 5 soldiers were killed and 5 were wounded in the attack. All of these were in the Muqdadiya and Khanaqin districts in the center and northeast of the governorate which are the main IS areas in Iraq.

There were two IEDs and two mortar incidents in Kirkuk. These were all in the southern part of the province where the Islamic State has bases.

There was an IED in the Amerli district in central Salahaddin.

None of these attacks were offensive in nature. None were in a city. The Islamic State is at its lowest point and only concerned with maintaining control of the rural, mountainous, and desert regions it is based out of.

Al Hurra, "An explosive device explodes in a Turkish shopping center in Baghdad," 8/5/22

NINA, "Five Federal Policemen were injured in a bomb explosion south of Kirkuk," 8/5/22

Shafaq News, "A boy was killed in a landmine explosion in Salahaddin," 8/5/22

- "An explosion targets a Federal Police patrol south of Kirkuk," 8/5/22

- "A lawyer survived an assassination attempt in Diyala," 7/8/22

- "A soldier and four members of the crowd were injured on duty in two provinces," 8/3/22