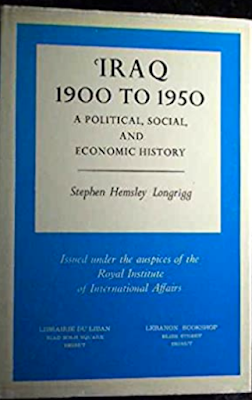 Iraq, 1900 to 1950, A Political, Social, and Economic History by Stephen Longrigg is one of the early histories of the country in English. Longrigg first entered Iraq in 1915 during World War I as a British officer and then lived there for the next 16 years as an adviser to the government and then as an official of the Iraq Petroleum Company. The book argues that Iraq was constantly developing after its backwardness under the Ottomans. Its real theme was supporting British imperialism and oligarchic rule in the country.

Longrigg tried to portray the Iraqi economy as being on a steady path towards progress but downplayed how it was controlled by a landed elite who only expanded its power. Agriculture was the main employer in the nation and its main export after oil. The author described how irrigation pumps were introduced to increase production, and that efforts were made at mechanization and experimenting with new crops. A Development Board was created to use Iraq’s huge petroleum revenues to build irrigation works to boost farming and control flooding. The sector was dominated by sheikhs and absentee urban landlords who benefited from these programs which increased their holdings. Farm laborers on the other hand were largely landless and extremely poor. At one point Longrigg said that their fate had not changed much from the founding of Iraq in 1920 to the 1950s but that at least agriculture was stable. Here is a perfect example how Longrigg promoted the status quo. He gave agriculture the façade of advancement but an elite maintained control of the land and the peasantry. He also didn’t mention that things like the Development Board’s projects only increased the gentry’s holdings by opening up more land. Growth in farming just increased their wealth.

The book took the same approach with British imperialism. Longrigg claimed that only a small and often rebellious minority were anti-British but those same forces were able to lead strikes, huge protests and riots in 1948 that were only suppressed by calling out the military. His goal was to constantly downplay how much Iraqis resented the U.K.’s influence in their country. In his conclusion he said that Iraq had no choice but to be pro-Western and connected to England because the alternatives like the Arab or Islamic world would fail. This led the author to constantly apologize and gloss over British power in Iraq. Being a former British soldier and adviser to the Iraqi government this could be expected. He was after all an imperial officer so it was no surprise that he would stand for what the empire had accomplished and critique those that opposed it.

Finally, Iraq, 1900 To 1950’s dealing with politics followed the same theme. Longrigg went through all the governments that came and went in huge numbers during the start of the country. The political class was made up of a small group of people that decided votes beforehand and then would constantly move in and out of office. Thus you had people like Nuri al-Said who was prime minister nine times, Jamil al-Midfai who held the office five times and Abd al-Muhsin al-Sadoun who was premier four times. It was people like them rather than the public or even the parliament that really ran things. This oligarchy would not allow the small yet growing middle class to join them, were opposed to any change and turned to repression again and again against any group that pushed it. The author added that the electorate was largely illiterate, didn’t understand government and even claimed that Arabs lacked the character for politics. Here again, you have the book espousing the elite. The author would concede that Iraq was not a real democracy but it was what the British created and what kept the country running. He tried to argue this was the best Iraq could hope for because the politicians were the smartest and most Western in the country. Stability was what mattered most.

Iraq 1900 To 1950 does cover a lot of the inner workings of Iraqi politics and economics from the end of the Ottoman era to the monarchy. It’s bias towards British imperialism and the Iraqi elite however means it has to be read with a huge grain of salt. At least it doesn’t try to hide its shortcomings as Longrigg does mention his point of view over and over. That does mean the book is really only for those invested in Iraqi history and not for the novice.