Violence Remains At Very Low Level In Iraq In July 2022 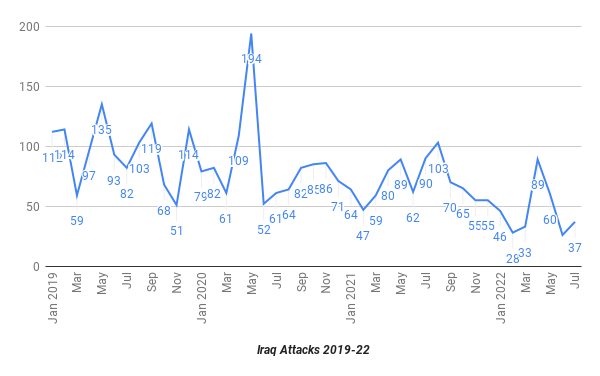 Security remained relatively the same in Iraq in July 2022. The number of incidents by the Islamic State went slightly up from June, but they were still at a very low level. Attacks by pro-Iran groups went down. The main difference was that casualties were significantly higher in July versus June.

The number of incidents barely changed between June and July. There were 40 incidents in June and 43 in July. For four of the eight months in 2022 incidents have been in the 40s. 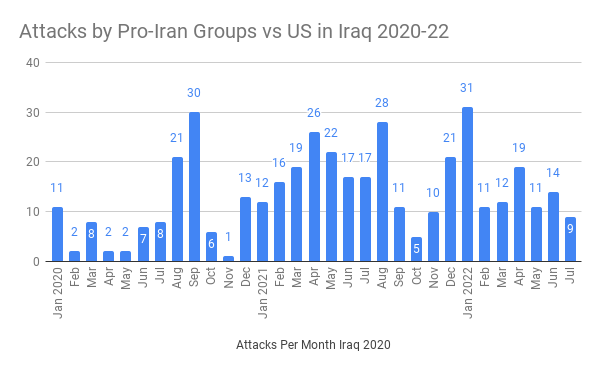 There were 9 incidents by pro-Iran groups. As has become the norm there were more rocket and drone attacks, 5 total, than IEDs, 3 total. Mortars were also used and a drone crashed. There were very few attacks by these factions until a Turkish strike killed several civilians in Kurdistan. After that there were 5 attacks on Turkish bases in Dohuk and Ninewa, plus the Turkish consulate in Mosul. The decrease in operations was likely because these groups were caught up in the deadlocked talks to form a new government. Then they felt obliged to respond to the Turkish action as standing up to Ankara gives these groups another rational for existing.

Incidents by the Islamic State went from 26 in June to 37 in July. The increase might be because the insurgents are finally starting their annual summer offensive but it’s too early to tell.

There was a large increase in casualties. 33 people were killed and 54 wounded. 4 Hashd al-Shaabi, 12 members of the Iraqi Security Forces (ISF), and 17 civilians died and 11 Hashd, 18 ISF and 25 civilians were injured. Only 7 people died in June and 33 were wounded.

There were just 5 offensive operations by IS in July versus just 2 in June. That along with the low number of incidents shows how far the Islamic State has fallen. It is barely hanging on in Iraq. It is only really active in rural, mountainous and desert areas where it has little impact upon the country. 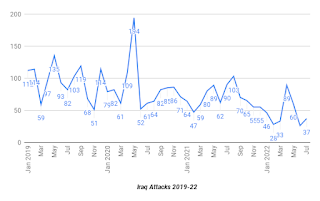