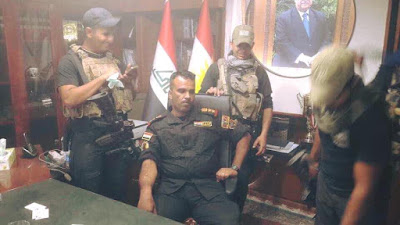 Prime Minister Haidar Abadi’s move in Kirkuk went from a possible disaster to an unmitigated success. After fighting broke out in the morning of October 16 the Kurds withdrew and the Iraqi forces took all the positions they wanted plus Kirkuk city and areas of northeast Diyala. This was the result of a deal with the major wing of the Patriotic Union of Kurdistan (PUK), which has left the Kurdistan Democratic Party (KDP) and President Massoud Barzani hanging high and dry, and threatens the future of the Kurdistan Regional Government (KRG).


A short burst of fighting in Kirkuk gave way to a Kurdish withdrawal in Kirkuk. On the morning of October 16, the Iraqi forces began advancing again to occupy positions they had abandoned in June 2014 when heavy gunfire started in Taza including artillery. That only lasted a short while before the Peshmerga withdrew. That was orchestrated by the main wing of the Patriotic Union of Kurdistan (PUK), which brokered a deal with Baghdad. That forced the Kurdistan Democratic Party (KDP) forces to pull back as well. Not only did they give up all the positions the central government wanted such as the K1 military base, the military airport, and the Bai Hassan and Avana oil fields, but also the Baba Gargur oil and gas field and Kirkuk city itself. Governor Najmaldin Karim who was calling for the people to defend the city fled to Irbil and members of the Golden Division occupied his office. While hundreds of Kurds were seen fleeing the city, some Arabs and Turkmen were celebrating the arrival of the federal forces.

The PUK made a similar move in Diyala, and Baghdad may attempt to force the KDP out of areas of Ninewa as well. The Kurdish forces left Jawala, Qara Tapa, Mandali, and Daquq in northeast Diyala. That occurred after a meeting Diyala Governor Muthanna al-Tamimi had with the army chief of staff and the PUK. Like in Kirkuk, the PUK agreed to allow federal forces back into areas they held before the Islamic State swept through Iraq in 2014. There were also reports that the joint forces may want the KDP to vacate Bashiqa and Mosul Dam in Ninewa. That might be much more difficult as the KDP is furious over what happened in Kirkuk. At the same time, they would lose a military confrontation, so they are between a rock and a hard place.

Prime Minister Abadi came out the big winner. The movement of forces into Kirkuk could have led to an extended battle with the Kurds. Baghdad would have won in the end, but the bloodshed would have been costly and useless in the end. Instead, Abadi found a partner with most of the PUK, which did not want a fight. The premier got an assist from Iran that was against the Kurdish referendum, and put pressure on the PUK to compromise. The KDP and some commentators are pushing the narrative that this was all the work of Tehran. Abadi is pro-western, so while he was helped by Iran he made this move on his own, mostly due to pressure from parliament to retaliate against the Kurds for the referendum.

President Massoud Barzani was the major loser. He was hoping to turn the referendum into making him the undisputed Kurdish leader, and hold onto the presidency for life. There was talk of delaying the presidential election for example scheduled for November, so he could stay in office longer. Instead he was faced with the consequences of his pursuit of the referendum with no real plan for its repercussions. He pushed through the election on his own hoping to force all the other Kurdish parties to join suit. That didn’t happen, and he infuriated Baghdad, and all of Iraq’s neighbors. Now not only has he lost standing, but the Kurdistan Regional Government (KRG) may be no more. KDP officials are calling the PUK traitors, while the PUK are calling Barzani a thief. It’s likely that Kurdistan will revert to its 1990s status with the KDP controlling its areas, Irbil and Dohuk, and the PUK Sulaymaniya and Halabja. The KRG economy has also taken a hit. The Avana and Bai Hassan oil fields in Kirkuk provided roughly half of the region’s revenues. Now they are back in the federal government’s control. The oil will still need to go through the Kurdish pipeline to reach Turkey for export, but Ankara has the upper hand with the line, and is mad at the KDP and Barzani as well for the referendum. It could shut down all Kurdish exports through the line if it wanted to if Barzani tried to stop federal oil from flowing through it. The Kurdistan government has been broke since Baghdad cut off its share of the budget and oil prices plummeted. It also took advances from oil traders for its exports incurring huge debts in return. With the loss of the two Kirkuk fields its finances will be even worse off. Finally, all the time and money the KDP and KRG invested in building international support did not pay off as neither Turkey nor the west came out for the referendum, and the U.S. said it was not taking sides in the Kirkuk conflict. There is no other direction for Barzani to go now but down from here.

The PUK is expecting huge concessions for their move and the major wing of the party is hoping that its rivals are done for now. In return for withdrawing from Kirkuk the PUK is likely expecting Baghdad to pay for its civil servants and perhaps its Peshmerga as well. Iran has shut down its border crossings with Sulaymaniya hurting trade and tariffs for the PUK. That will likely end. Hero Ibrahim, Pavel Talabani and others in the family are hoping to use those to put their enemies within the party away. Already Kirkuk Governor Karim fled to Irbil, and KRG Vice President Kosrat Rasul who made a big deal of leading thousands of Peshmerga to defend Kirkuk has egg on his face like President Barzani for leaving. Those two had thrown in with the KDP and will now suffer the consequences. The PUK has felt sidelined by the KDP and by the rise of the Change Movement for the last couple years. Now it can feel that it has solidified its hold over its two provinces, and helped deliver a large blow to the KDP and its inter party rivals.

Buratha News, “Commander of the Kurdistan anti-terrorism forces: We will not allow our children to die for the outgoing President Massoud Barzani,” 10/16/17
- “Evacuation of the headquarters of the Kurdish parties in Mandali east Diyala,” 10/16/17

Al Forat, “Peshmerga burning its headquarters before its withdrawal from Daquq,” 10/16/17

Al Ghad Press, “Joint operations warn insurgents in Kirkuk of being exposed to the security forces,” 10/16/17

Al Maalomah, “Law enforcement is moving to liberate the Mosul Dam from the Peshmerga,” 10/16/17

NINA, “Governor of Kirkuk: The situation in the province is good and stable and tomorrow will be an official work,” 10/16/17
- “Peshmerga Forces Begin To Withdraw From Their HQs In Qara Taba Of Diyala,” 10/16/17
- “The Security forces entered Jalawla northeast of Baquba from three axes,” 10/16/17

Al Noor News, “Urgent … Peshmerga Forces Of The Patriotic Union of Kurdistan Leave Their Positions To The Iraqi Forces Advance,” 10/16/17

Sotaliraq, “Diyala … Governor announces the redeployment of security forces in the disputed areas,” 10/17/17

No doubt am out of date but my recollection is that historically the KDP has been aligned with Iran and Barzani? What gives?

Back during the Mullah Mustafa days and the Shah, Iran was one of the main supporters because Tehran was using them against Baghdad. Iran would routinely turn off and on support depending upon its relationship with Iraq. The KDP was backed by Iran during the Iran-Iraq War under Massoud Barzani as well. Today Barzani is aligned with Turkey however and the PUK with Iran, although that can vary depending upon which member of the family and party you're talking about.

No doubt PUK have many old scores to settle. Will this nullify all the good work of the '90s when the US resolved the civil war between the two?

Looks like the Kurds survived the wreckings of the dolts Obama & Biden only to fall when the battle is won due to Barzani's old fashioned, long out of date, yearnings for a mini soviet empire.
A KRG is essential if the Iraqi Kurds are to continue building a modern democratic state to stand as a model to the Arabs.

Today Baghdad is more democratic than the KRG. Barzani's term expired years ago, he dismissed the parliament and got rid of Change's ministers, they have not issued any budgets or reports on their oil exports for some time either. Politics continue to be dominated by two families as well.