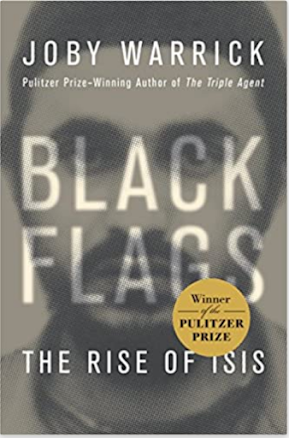 Black Flags, The Rise Of ISIS by journalist Joby Warrick purports to be about Abu Musab al-Zarqawi the founder of Al Qaeda in Iraq and his legacy the Islamic State. The problem is that Warrick let his sources shape his writing, meaning the major players he talked with including people like Jordan’s King Abdullah, former U.S. Ambassador Robert Ford, retired General Stanley McChrystal and others determined what he wrote about whether they were relevant to his topic or not. It makes for a very uneven book that becomes more discordant as it progresses.

The best part of Black Flags is the middle which is about the rise and fall of Zarqawi. It begins with a biography of the terrorist with his troubled upbringing in Jordan where he was constantly in trouble. It was his mother that pushed him towards religion in the hopes that it would straighten him out. Instead it led him to go to Afghanistan in 1989 where he got his first taste of combat and jihadists. He returned to Jordan in 1993, formed a group called Bayat al-Imam with his mentor Abu Mohammed al-Maqdisi, but was arrested before he could do anything. His imprisonment would make him a leader, and when he was amnestied in 1999 he returned to Afghanistan. There he got funding from Al Qaeda while being able to maintain his independence. After the Taliban were overthrown he went to Iraqi Kurdistan to prepare to fight the Americans. The U.S. made him a celebrity with Secretary of State Powell’s speech to the United Nations in 2003 claiming he was the connection between Iraq and Al Qaeda. After the U.S. invasion he carried out a series of bombings that warned Arab states not to have embassies in Iraq, for international and humanitarian organization to leave the country, and started sectarian tensions between Sunnis and Shiites. He effectively undermined the U.S. occupation in a matter of months. This is mostly common history and Warrick doesn’t add much, but it collects it all together in one tome. If the author had been able to just stick to Zarqawi and the organization he gave birth to which became the Islamic State this might have been a worthwhile book. Instead it went completely off the rails.

How Warrick’s sources shaped his book are apparent right at the start. His beginning appears to be more about Jordan than his topic. There’s an entire chapter on how King Abdullah came to power in Jordan for instance. It covers a female suicide bomber that failed in her mission and was captured in Jordan. Years later in 2014 the Islamic State demanded she be released in return for a Jordanian pilot it captured. Again, the entire story is told from the Jordanian perspective because Warrick interviewed several members of Jordanian intelligence and the king. The author’s intent seemed to be if he interviewed someone then he was going to include their stories narrative be damned!

The last third of the book gets even worse. Warrick starts skipping from topic to topic seemingly losing complete focus upon his topic of the Islamic State, and again letting his sources drive his writing. For instance, he covers the U.S. re-establishing diplomatic relations with Syria in 2011 because he talked with Robert Ford who was sent to Damascus as the ambassador. Then he switches to Jordan’s King Abdullah attempting to reach out to the Assad government which failed. Finally, the Islamic State emerges with the rise of Abu Bakr al-Baghdadi to be the leader of the group, but then it’s back to the Obama administration and Syria and Jordan as well. The book even ends with the Islamic State burning the captured Jordanian pilot in 2014 and claiming that was the real turning point in the fight against IS that year. Most of this is completely irrelevant and meanders back and forth between his favorite sources. It’s so bad that if the reader skipped the last one hundred pages of Black Flags they would probably be better off.

Overall, this makes for a very disappointing read. The history of Zarqawi is good, but not something that can’t be found in other sources. The fact that Warrick couldn’t stay focused because he was so reliant upon his sources eventually made for a train wreck in the last third of Black Flags.