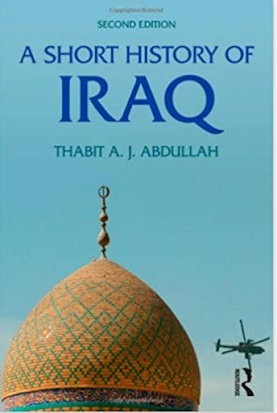 Professor Thabit Abdullah wrote a short and concise book in A Short History of Iraq. It starts with the Arab conquest of what would become Iraq in the 7th Century and goes up to U.S. occupation. Throughout each period he talks about the political and economic developments with a bit on culture as well. Abdullah emphasizes that Iraq has constantly seen conflict and divisions but also periods of stability and growth.

Abdullah’s account of the early history of Iraq sets the stage for the entire book. He starts with the Arab conquest in the 7th Century. They found a tremendously diverse population of Persian aristocrats and bureaucrats, nomadic Arab tribes, Kurds, plus small groups of Greeks, Indians, Africans with a variety of religions as well. The Arabs brought Islam which would eventually spread to the majority of the people which Abdullah argues created a more homogenous society. Shortly afterward Islam split with first Ali and then Hussein which led to the Sunni-Shiite divide and then the Umayad caliphate fell into civil war. Eventually the Abbasid empire rose which was considered a golden age in Iraq. The population, commerce and culture grew and Baghdad became the capital in 762 A.D. It two would fall into divisions and war as well. Here in a nutshell you have all of Iraq’s history in the centuries that followed. You have the mix of people. The attempt to create a unified culture. Constant wars and conflicts mixed with periods of great growth. These are the themes Abdullah would write about throughout the book.

Another important issue Abdullah highlights is the economic cleavages that have been a constant in the country. For most of its history the biggest difference was between the countryside and the cities. In the former the peasants were always impoverished and exploited by large landowners. They would eventually be made up of tribesmen who became sharecroppers and serfs to their sheikhs who would enter the elite. The British would legalize their hold by giving the tribal leaders de facto control of the countryside. The extreme poverty would lead thousands to leave and move to the cities which is still going on to this day. The power of the sheikhs would also make agriculture the major business of the country and the main interest of the state until the discovery of oil and its commercial exploitation in the 1930s. Even after that the monarchy would focus upon agriculture for its major development projects because the wealth of the elite was based upon the land. Not only that but the landholders resisted modernization fearing that it would disrupt the status quo. This meant for the vast majority of Iraqi history most of the population were extremely impoverished. Laws and tradition also tied them to the land which prohibited them ever leaving until the modern era.

The author also draws a comparison between the British and American invasions and occupations of Iraq. In 1917 the British took Baghdad from the Ottomans and the commander General Maude issued a message that they had come as liberators not as conquerors and promised an Arab state free of foreign rule. That wasn’t true as Iraq was created as a British mandate under the League of Nations. The British then imposed direct rule and promised to spread western civilization throughout the country. The Iraqis quickly rose up in the 1920 Revolt which was put down but set the stage for Iraq’s independence in 1932 although still under British hegemony. Abdullah believes this was repeated by the U.S. President Bush said that the Americans were coming as liberators but then created the Coalition Provisional Authority to run Iraq. It too promised to create a democracy in Iraq and it too faced the wrath of the Iraqis with an insurgency. Both countries disregarded the demands of the Iraqis. Abdullah however thought the Americans did more harm than the British by institutionalizing ethnosectarian divisions in the government. At the same time, his history has some problems. He wrote that Bush was shaped by neoconservatism when they were a small minority within his administration with no direct access to the president. He also claimed that the Americans wanted to turn over Iraq’s oil to foreign companies and yet they explicitly said that they would not allow privatization and wanted Iraqis to run their most important resource. Otherwise the similarities are striking between the two periods.

Abdullah touches on all the major parts of Iraqi history from the Arab conquest to the Abbasids to the Ottomans to the British Mandate to independent Iraq. He covers the politics, economics and to a lesser extent culture. If one wanted a really quick read to learn the basics of Iraq’s past this would be a good start.