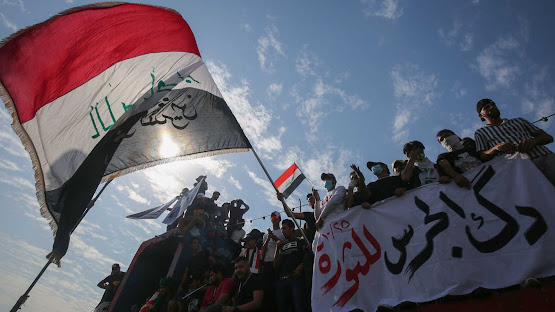 October 25 marked another anniversary for the protest movement when major demonstrations and clashes broke out across Baghdad and the south. To commemorate the event there were marches but also signs of the weakness of the movement that once hoped to transform the country’s political system.

People came out into the streets in Baghdad, Babil, Basra, Dhi Qar, Diwaniya, Karbala, Maysan, Muthanna, Najaf and Wasit. Basra and Dhi Qar saw large and well organized protests. The other major gathering was in Baghdad’s Tahrir Square, but it was marked by divisions and violence. The demonstrations there seemed to be organized by different groups. The first reportedly came out with different slogans and then left. Then Communists and civil groups came. The Sadrists were present as well, but blocked people from entering the Turkish Restaurant a large building that was once occupied by activists inside the square. Clashes started with the security forces when some people were blocked from entering the square. More broke out as people tried to cross three bridges from Tahrir towards the Green Zone. Rocks and Molotov cocktails were thrown and the security forces responded with tear gas and water hoses. Some of the tents in Tahrir were also set on fire, which was blamed upon infiltrators. The fact that there were demonstrations in ten provinces was impressive but the problems with the movement were highlighted as well.

Beforehand there was news that activists tried to unify their organizing but it still hasn’t seemed to work. On October 19 it was reported that a Committee for the October Revolution was created from groups from eight provinces after a meeting in Muthanna. The movement still lacks a centralized leadership however and are split over tactics, strategy and demands. For instance, Raghad Kasim in a piece for the Atlantic Council pointed out that some want to mobilize in the south, others want to concentrate upon the Green Zone, while another group wanted to target the oil facilities in the south. They also maintain their general demands of early elections, jobs, and fighting corruption, but have not agreed on how to achieve them. Those differences were apparent on October 25 when you had well organized protests in Basra and Dhi Qar and then all kinds of splits in Baghdad.

More importantly a year’s worth of attacks, threats, intimidation, kidnappings, and assassinations have taken their toll. There are continued reports of activists fleeing because of this campaign against them. Thus this summer there were a slew of protests early on calling for political reform, but then they dissipated with most now focusing upon economic concerns like jobs and the government not paying salaries. That means despite October 25’s events there are not many signs that the movement has the staying power it once had.

- “Some of the protest tents are burning now in Tahrir Square in #Baghdad. It is part of the chaos, divisions and infiltrations by political parties and armed groups,” Twitter, 10/25/20

- “The supporters of Muqtada Sadr are spread heavily in Tahrir Square in #Baghdad, they prevented the protesters (in coordination with security forces) to reach “Turkish restaurant” the icon of the protests, this is why there is not any picture of the protesters taken from there…,” Twitter, 10/25/20

- “The formation of a unified political entity for the demonstrators in Iraq and the crowd for a major demonstration,” 10/23/20

Al Mada, “Governorates commemorate October and threaten to escalate if the government ignores its 10 demands,” 10/25/20

Al Mirbad, “A meeting of representatives of the sit-in squares announces the formation of an organizational committee,” 10/19/20

- “Pictures: Thousands from the provinces flocked to Tahrir Square in preparation for tomorrow’s demonstration,” 10/24/20

- “Tires were burned at the Al-Orouba intersection in the center of Al-Diwaniya,” 10/25/20

- “Demonstrators Burn The House Of The Former Head Of Babylon Council,” 10/25/20