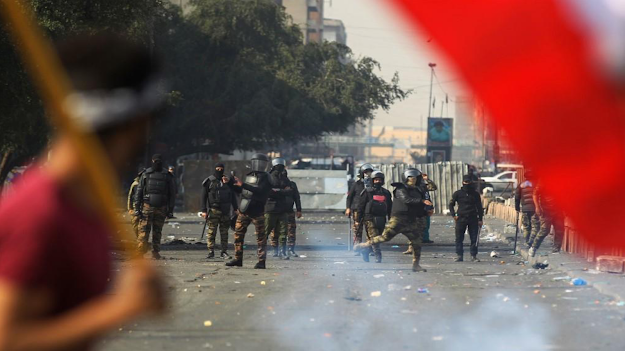 (UN)
The United Nations recently released a report about the violence Iraq’s protest movement has faced. It covered the period from October 2019 when demonstrations started up to April 2020. The U.N. provided no new details but did give some raw data on the number of attacks that the country’s activists have faced over the last few months.

The first thing covered was the losses. The United Nations counted 487 protesters that were killed and 7,715 injured. The Kazemi government actually had a higher figure of 560 deaths reported on July 31. 109 of those fatalities and 821 of the injured came at the hands of unknown armed groups. On December 6, 2019 for instance, 100 armed men in 8 vehicles entered the protest area in Baghdad and opened fire killing 22 and wounding 116. The vehicles were able to pass through several checkpoints showing that they had security clearances and were connected to the government’s forces. Those same organizations attempted 31 assassinations leading to 22 dead and 13 injured. Those are likely pro-Iran Hashd units that were organized under Prime Minister Abdul Mahdi to suppress the demonstrations. Another 60 people died and 50 more were wounded at the hands of armed guards working for political parties and the Hashd in Babil, Dhi Qar, Maysan, and Najaf. The Iraqi Security Forces (ISF) have often used live ammunition against gatherings and fired tear gas cannisters at crowds with deadly intent. The U.N. blamed the lack of training and preparation in some cases, while in other instances the ISF and Hashd purposely tried to harm people. There were several cases in Baghdad for instance where snipers were employed against protests. A pattern has developed over the years that when demonstration begin the ISF are simply attempting to contain them. As they drag on however, the ISF and Hashd turn to intimidation via direct attacks.

Activists have faced a steady stream of arrests and kidnappings. The U.N. reported around 3,000 people had been arrested over the six months the report covered. Many of those taken in by the authorities reported being tortured and abused. Activists have also arbitrarily been detained while not at the demonstrations. They claimed 154 people were disappeared. The U.N. found evidence to support 99 of those claims involving 123 people. 32 of those were blamed on Hashd units, and 20 of those people have not been seen since.

There has been a steady pace of intimidation as well. On October 25, 2019 the High Judicial Council announced that violence and destruction of property associated with the protests could be considered acts of terrorism. The next month the Federal Cassation Court reversed that but the statement had already been felt by activists. The government cut the Internet when the demonstrations began in an attempt to stifle organizing. That was eventually reversed but showed that the authorities were opposed to what was happening. Activists have received a steady stream of threats. Much of that comes over social media. One popular accusation is that the protesters are working with the West. The media has been blocked from covering some of the events, and journalists have been beaten, harassed and threatened too.

These issues have all been reported before but as individual incidents. The U.N. brought them all together in one report. They provided a litany of attacks and intimidation tactics employed by the government and parties against the demonstrators. This is nothing new either as all the administrations since Prime Minister Nouri al-Maliki have attempted to crackdown upon protests using force. PM Kazemi is the exception to that trend, but even he has not been able to stop pro-Iran groups from assassinating, assaulting and kidnapping activists. It’s a testament to the determination of the protesters that they have continued after all of this violence aimed at them for so long.

United Nations Assistance Mission for Iraq, Office of the United Nations High Commissioner for Human Rights, “Human Rights Violations and Abuses in the Context of Demonstrations in Iraq October 2019 to April 2020,” August 2020