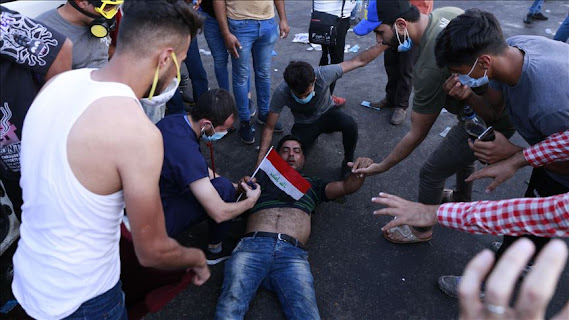 (Anadolu Agency)
Before he became prime minister of Iraq Mustafa al-Kazemi supported the protests calling for reform. When he took office he ordered all the demonstrators that were arrested to be released, and that the killers of protesters would be brought to justice. In September the premier announced that his government would be giving 1.2 million dinars, $1,000, to each family that suffered a death during the demonstrations and a monthly pension after that. People who were wounded would be getting a monthly payment as well.

The problem is that the administration has no way to fulfill this promise. It is facing the worst economic crisis since 2003 due to the collapse of oil prices. It doesn’t have money to meet its most pressing part of the budget which is government salaries and compensation. If it is unable to do that there’s no way families and protesters are going to get any money anytime soon. This is a worrying trend with the Kazemi government. He has made promises he knows he can’t keep and this is the latest example.