Review To Start A War: How The Bush Administration Took America Into Iraq 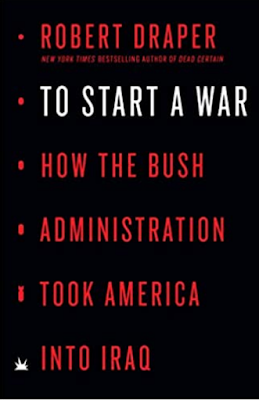 To Start A War: How The Bush Administration Took America Into Iraq is the latest book to try to explain why the Bush administration invaded Iraq in 2003. It brings together all the major issues such as the impact of 9/11 upon the White House, the claims about Iraq and its ties to Al Qaeda and its weapons of mass destruction, the divisions within the administration, the Iraqi National Congress, the war planning and the postwar fiasco, and most importantly why Bush wanted war. At the same time, there is little new in the book. All the major stories have been told before. What it does is bring them all together in one tome. Author Robert Draper’s main thesis was that the war was one based upon faith not fact and that Bush’s leadership style led to all the problems after 2003.

Draper’s one major insight is the administrative style within the Bush White House and how that affected the Iraq War. National Security Advisor Condoleezza Rice said that Bush didn’t like to hear disagreements at meetings. That was because he wanted things to go fast and quick. Therefore debates were not accepted and usually only one policy recommendation was suggested. This is the reason why there was never a discussion at the White House over whether or not to invade Iraq. Bush didn’t want one. Not only that but the divisions within the administration over whether to go to war are legendary. Secretary of Defense Donald Rumsfeld backed by Vice President Dick Cheney was a bitter rival of Secretary of State Colin Powell. The National Security Council meetings were famous for the two sides going at it. Bush never saw any of that because Rice, Rumsfeld, Powell and others knew that Bush didn’t want to hear it. Here you have one of the biggest decisions of an entire presidency and there was never a discussion about it with all the major actors because that wasn’t Bush’s style. According to Draper it’s not even clear whether the president knew his staff was so divided over the issue. Not only that, but this explains why there was never any coherent postwar plan because the president was never told about all the differences going on. He was in a bubble which the White House actively encouraged that lasted all the way up to 2006 when it came to Iraq. This is the most important thing that To Start A War adds to the history of the invasion.

The other major argument of the book was that Iraq was a matter of faith for Bush and other war advocates. The president would say again and again that Iraq hated America’s freedom. Draper writes that Bush made the jump from that to Saddam wanting to destroy America. Bush believed that freedom was a universal right, dictators were the anthesis of that so therefore they were enemies of the United States who wanted to attack us as a result. There was no intelligence to support this. These ideas didn’t come from a world leader telling him about how Saddam thought. It was simply the president’s world view. After 9/11 he was determined to take on those he believed were against America’s way of life. He’d already assumed that Saddam was involved in the September terrorist attacks despite various reports by his government that he was not again because of faith. Others such as Deputy Secretary of Defense Paul Wolfowitz were also driven by belief over facts about Iraq. The administration therefore only accepted the news it wanted to hear and rejected everything else. Plus the fact that Bush didn’t want to hear disagreements again led to no real discussion about whether Iraq was connected to Al Qaeda or had weapons of mass destruction. These were all deeply ingrained assumptions and when things didn’t turn up to support them, they created their own alternative information.

One major drawback of the book is that if you are familiar with the Iraq war then the vast majority of Draper’s work is already known. You have the Pentagon coming up with its own intelligence unit to tie Iraq with Al Qaeda when the CIA said a relationship didn’t exist. CIA Director George Tenet had his staff present the best case against Iraq’s WMD only for Bush to not be impressed. Tenet tried to convince him by saying it was a slam dunk. There’s Vice President Cheney’s office writing a draft of Powell’s 2003 U.N. speech only to have him throw it out. There’s also no real analysis of the history and Draper’s own thoughts can easily be lost in the 400 pages of story after story.

The ending was also disappointing unless the author was trying to be completely ironic. He  finishes with Wolfowitz saying that he was one of the true believers in invading all the way back to the 1990s. Draper says his ultimate goal was just peace in Iraq. The fact that there’s still an insurgency and all kinds of other problems in Iraq 17 years later and as Draper notes over 400,000 Iraqis are dead as a result makes his last words seem completely sarcastic, but that probably wasn’t his intent. If Draper was trying to say that Wolfowitz had good intentions they just went awry that doesn’t cut it either. Iraq was like an obsession for Wolfowitz for over a decade and yet he never took the time to learn anything about the country. Like Bush he just had beliefs about how Saddam acted and what the Iraqi people wanted. Thinking he could save them all was hubris.

If you wanted to read just one book on why Bush decided to invade Iraq To Start A War wouldn’t be a bad choice. All the major events are laid out in a very readable style. Draper combines the big picture issues like why Bush believed Iraq was a threat with all the small details of how that led to the war. On the downside there’s little analysis to give any deeper understanding of events. It’s more like one issue after another. In the end, To Start A War would be a very good start to researching the 2003 invasion, and then additional books would be added to give the reader fuller knowledge of what happened.