Review The Occupation, War And Resistance In Iraq 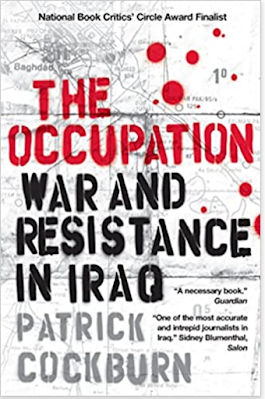 The Occupation, War And Resistance In Iraq by journalist Patrick Cockburn is a short overview of the mistakes the U.S. made during its time in Iraq from its lack of knowledge of the country before it invaded to the constant political blunders it made afterward. The book starts in the 1990s to give some background to what Iraq was like before the war started, and then mostly focuses upon the period the Coalition Provisional Authority ruled the nation. It ends in 2006. Cockburn argues that America’s hubris before and after the invasion undermined the new Iraq it was trying to create.

Cockburn begins with some Iraqi history since most in the West knew nothing about it. He reminds the reader that after the British created and ran Iraq post-World War I Iraqis eventually rose up in the 1920 Revolt against foreign rule. The same thing happened to the Americans. The author then goes through how divided Iraq was before the invasion. The 1991 uprising created a huge gap between Sunnis and Shiites. Shiites also became more religious. Sanctions largely impoverished the country and destroyed its once large and vibrant middle class. The Iraqi opposition was hopelessly split as well as shown by two meetings before the war started. Cockburn believed that foretold what would happen when those same parties took power post-Saddam Hussein. The book argues that the U.S. never took the time to learn anything about Iraq and even ignored what happened at the opposition conferences because it was so self-assured it would be victorious and everything would break its way it didn’t need to know anything. This would be compounded by its moves after the invasion.

Most of The Occupation focuses upon 2003-2004 when the Coalition Provisional Authority ran Iraq. Cockburn believes the CPA utterly failed because again, it didn’t comprehend the country it was in charge of. The author provides a nice list of mistakes from believing that Iraqis were defeated and therefore would do whatever the U.S. told them to, to never including Iraqis in its decisions, to being secluded in the Green Zone and not knowing what was going on in the rest of the country, to its failure to restore services, downplaying the insurgency, mistreating Iraqis during security operations and claiming one turning point and victory after another as the situation actually got worse. Cockburn provides a metaphor for Iraq’s misguided occupation when he saw a small unit of American soldiers set up a checkpoint in Kirkuk right after the city fell during the invasion. They had two signs written in Kurdish, but didn’t know which said what, and were asking the drivers of cars they stopped if they had any weapons which few of them understood because they didn’t speak English. To Cockburn this appeared to utterly futile and he would come to the conclusion that so would the U.S.’s attempt to rule Iraq.

Finally, the book finishes with the 2004-06 period when Iraqis took power and created a whole new slew of problems. When the interim Iraqi government took over in 2004 the new elite divided up the ministries and created patronage networks to enrich themselves and ensure they would stay in power. The Defense Ministry was a perfect example which lost almost its entire budget for arming the military due to corruption. When a government was elected the Shiite religious parties took power and wanted to ensure their rule by taking over the security forces. The Interior Ministry was given to the Badr Organization which filled the police force with its militia men who then set up death squads and used the commandos to attack Sunnis. The insurgency increased its attacks as well leading to the civil war. That was topped off by the February 2006 bombing of the Samarra shrine by Al Qaeda in Iraq which made the sectarian killings go into overdrive and started the Sunni cleansing of Baghdad. This was not the political system the Americans were hoping to create when it removed Saddam Hussein, but it was the one that it ended up with. It couldn’t control security nor politics and was stuck supporting a dysfunctional, corrupt and sectarian regime. Cockburn writes that Iraqi democracy was supposed to bring the country together and empower the people, but it only led to more divisions.

If one wants a very brief overview of how the U.S. invasion and occupation went wrong than Cockburn’s book would be a good start. Cockburn was one of the few reporters that was in Iraq during Saddam’s era giving him a background in the country. He reported and traveled throughout the nation after 2003 which provided the book with plenty of personal stories to go along with all of the big events that he covered. It gives all of the basics of what went wrong and doesn’t just focus on the Americans with plenty of Iraqi perspectives.