Review The Rise of Islamic State, ISIS and the New Sunni Revolution 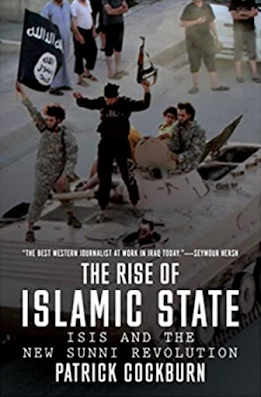 The Rise of Islamic State, ISIS and the New Sunni Revolution was written by reporter Patrick Cockburn. He said he wanted to explain what led to the 2014 fall of Mosul and its aftermath, but that was misleading. What he wrote instead was a series of personal reflections upon the Mideast. Each chapter was like its own short essay and unrelated to the others. That meant there wasn’t a coherent story to the book. Not only that but as it progressed each chapter got more off track.

One of the good points of the book was Cockburn’s observations about what led to IS’s victories in 2014. One major issue was Prime Minister Nouri al-Maliki did not take the threat seriously. In January insurgents seized Fallujah in Anbar, and the premier seemed unfazed. He blamed the Saudis and Qatar for funding militants instead of looking at his own actions. Back in 2013 for instance, he sent government forces to attack the protest camp in Hawija which helped revive the insurgency. When IS attacked Mosul in June, Maliki claimed that the city would shortly be retaken and rejected an offer for Kurdish military aid. Then when Mosul fell he again talking about a conspiracy this time led by the Kurds who he accused of acting as fifth column. The fact that his hand-picked military commanders fled the city leading to a route by the Iraqi forces was never mentioned and no one, including the prime minister ever took responsibility. Cockburn also brings up how much of a paper tiger the Iraqi forces were. They were rife with corruption with officers using their positions to make money. All together you had a government that helped revive the insurgency and didn’t maintain its armed forces. It also ignored its own faults and blamed others for the Islamic State.

Cockburn also pointed out some of the problems the United States had in countering the Islamic State. The Obama administration was able to help push out PM Maliki and welcomed Haidar al-Abadi as the new leader. However it couldn’t get the Iraqi government to work any better. Abadi for instance, couldn’t get his Defense and Interior Ministers approved by parliament until October showing that lawmakers didn’t feel any sense of urgency. Syria was much more of a problem. For one, America believed it could find Syrians who would just fight IS when the vast majority wanted to overthrow the Assad regime. That was also the main concern of its regional partners such as Turkey, the Saudis and Gulf States, who also backed a number of jihadist groups. As a result, Cockburn didn’t believe that the Americans ever found reliable partners on the ground in either Iraq or Syria and questioned whether its policy would ever be successful. That proved largely correct in Syria, but wrong in Iraq. The combination of air power, military supplies and the Iraqi forces were eventually able to turn the tide but it took time. Americans finally settled on backing the Syrian Kurds who proved effective against IS, but continued Washington’s problems with its allies, especially Turkey who considered the Kurds terrorists.

Unfortunately the problems overwhelm The Rise of Islamic State. As the book progresses Cockburn goes off on more and more tangents. One of his favorite topics is condemning Saudi Arabia for spreading Wahabism that fuels Islamic radicalism and its hatred of Shiites. There is nothing the matter with that, but he never relates that to the Islamic State. Another time he talks about the anarchy in Libya after the fall of Qaddafi without mentioning IS. There’s a whole chapter about how Cockburn believes the most important thing reporters can do is provide context to wars because they are political in nature. He then skips all around the Mideast for examples of how the media got things wrong. The book becomes like a flow of consciousness for Cockburn writing about anything that pops up into his head jumping from topic and topic and losing all focus upon IS.

The Rise of Islamic State was one of a number of books written in the immediate aftermath of the Islamic State’s seizure of Mosul in Iraq in the summer of 2014. Many of those books proved to be not that good and this is a perfect example. Cockburn simply could not keep his eye on the topic. While there are some good points to be had they are overwhelmed by all the other things the author wanted to talk about which were not about the Islamic State.