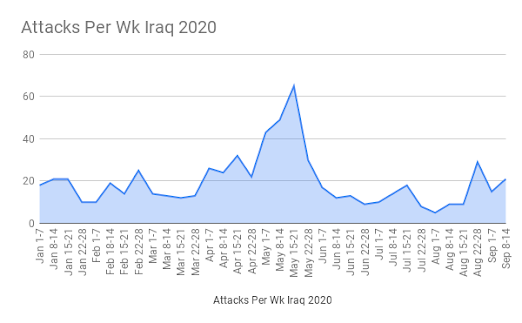 Attacks in Iraq were slightly up the second week of September. Once again, the types of incidents like a car bomb and two suicide bombers showed that the Islamic State may be starting a fall campaign. Pro-Iran groups also kept up their steady pace of operations against Western targets.

There were a total of 27 security incidents in Iraq reported in the media from September 8-14. 6 of those were by pro-Iran groups. That included 2 IEDs on convoys carrying supplies to the U.S. in Babil, one of which left 1 member of the security forces (ISF) dead and 3 civilian casualties. There were similar attacks in Diwaniya, Salahaddin that wounded 1 civilian, and Baghdad that wounded 2 including one ISF, plus a rocket attack upon Baghdad’s International Airport. The first week of the month saw 3 more casualties caused by these types of attacks, and in August there was one death. This was a decided increase in the cost of these operations but there was no public outcry about it. Prime Minister Mustafa Kazemi did promise an investigation but that was into the rockets landing on Baghdad’s airport.  Sotaliraq quoted a military source that said Hashd units were behind these incidents, which is common knowledge.

They led to 8 dead and 29 wounded. 3 members of the ISF and 5 civilians were killed and another 3 Hashd al-Shaabi, 7 ISF, and 19 civilians were injured. Unlike previous weeks civilians accounted for most of the casualties. IS has been singling out the security forces in a war of attrition since the spring so this was a rare week when they didn’t make up most of the fatalities and wounded.

The Hashd claimed they stopped a car bomb in Anbar. Three Hashd were wounded as a result. The week before there was a car bomb in the province as well. There are very few incidents in Anbar as it’s used as a logistics and smuggling hub by the insurgents. Two car bombs in two weeks is a sure sign that IS might be starting a new campaign. Before September the last vehicle bomb incidents took place in May, again in Anbar, during the Spring offensive.

Diyala saw the most incidents as usual with 8. Most of those were regular shootings and IEDs, but there was also an assassination attempt upon a police general using a sticky bomb. This as part of the war of attrition IS has launched which has gone after officers in the security forces. The first week of September for instance, a Hashd brigade commander was killed in the province.

An IED went off in the Makhmour district of southern Irbil. This area is part of the disputed territories. It is only hit when the insurgents pick up their attacks. There was one more incident there in August, but before that it hadn’t been hit since June.

Kirkuk saw 4 incidents during the week. That included 2 suicide bombers being surrounded by the police and then detonating their devices. Like the car bomb in Anbar this was another sign of an IS offensive starting. There was a suicide bomber the week before also in Kirkuk. The dean of a college also escaped an assassination attempt.

Ninewa saw four IEDs in the south and an infiltration attempt in the west along the Syrian border. Like Anbar, there are rarely incidents in the governorate accept during IS campaigns.

There were three other incidents in Salahaddin beside the IED by a pro-Iran Hashd unit. There was an assassination attempt on the mayor of Samarra, a gun battle, and a checkpoint was fired upon.

Baghdad Post, "The assassination of a security member by unknown gunmen in Baqubah," 9/10/20

- "Security Media: Thwarting an attempt by ISIS to bring weapons, medicine and women into Iraq," 9/12/20

- "Security operations in four Iraqi provinces to "dry up" the sources of terrorism," 9/10/20

Al Maalomah, "The Popular Mobilization Forces and security forces carry out a raid and search operation west of Tuz Khurmatu," 9/10/20

- "The Popular Mobilization Forces fend off an attack by ISIS south of Samarra," 9/12/20

- "The Popular Mobilization Forces launch a security operation on the Iraqi-Syrian border," 9/10/20

- "Security forces storm the desert areas between Ninewa and Salahaddin in search of wanted persons," 9/11/20

- "A Brigadier General In Diyala Police Escaped An Assassination Attempt When A Sticky Bomb Exploded In His Car," 9/10/20

- "Four people, from the same family, were wounded by an explosive device in southeast Mosul," 9/13/20

- "In the south of the country, two explosive devices were exploded at the International Coalition convoys," 9/14/20

- "The PMF Foils An Infiltration Attempt By ISIS Elements In Diyala," 9/12/20

- "The Popular Mobilization imposes a security cordon in the west of Khanaqin district and clear 21 km," 9/9/20

- "A soldier was injured in an explosive device explosion south of Baquba," 9/9/20

Shafaaq News, "4 civilians were killed and wounded in separate incidents in Diyala," 9/8/20

- “Military source: The elements and leaders of the Katyusha cells have been identified … they belong to the PMF,” 9/8/20

Al Sumaria, "The crowd announces the repulsion of an attack by ISIS north of Khanaqin," 9/6/20