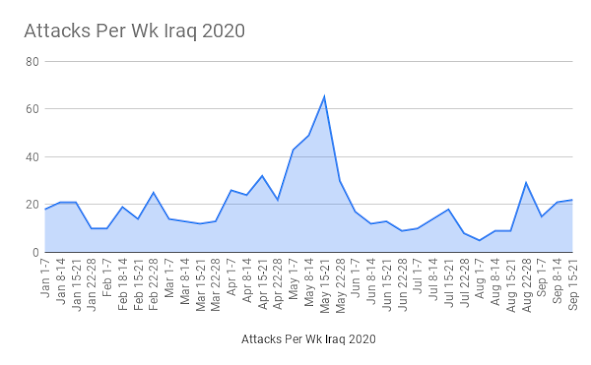 Violence in Iraq stayed at about the same level between the second and third weeks of September. Attacks have gone up in September overall in a possible fall offensive by the insurgents. Pro-Iran groups have also picked up their operations. September looks like it will have the most incidents by those groups in 2020.

A total of 32 security incidents were reported in the press in Iraq from September 15-21. 10 of those were by pro-Iran groups. That included IEDs on a British diplomatic convoy outside the Green Zone, and convoys carrying supplies to the Americans in Babil, Najaf, Salahaddin (twice), and Baghdad (twice). One person was wounded as a result in Salahaddin. During the month 1 person was killed and 8 have been injured in these operations. There have been a total of 21 such attacks in September compared to 24 in August. The latest wave of these incidents started in June when Iraq and the U.S. started talks over a new security agreement which Tehran is opposed to. The government has promised investigations into the rocket attacks in Baghdad but nothing has happened. It’s assumed these are being done by Hashd groups aligned with Iran such as Kataib Hezbollah.

There were 22 incidents by the Islamic State during the week. That was basically the same level as the previous week. Those attacks were spread across Baghdad (1), Salahaddin (3) Ninewa (4), Kirkuk (5), and Diyala (9).

Those left 12 dead and 14 wounded. 3 members of the Iraqi Security Forces (ISF), 4 civilians and 5 Hashd al-Shaabi lost their lives while 3 Hashd, 4 civilians and 7 ISF were injured. In the spring IS announced it was launching a war of attrition against the security forces. That has resulted in the ISF and Hashd accounting for the majority of casualties each week. This week was no exception with 18 of the 26 dead and wounded coming from the government’s forces.

The militants have basically given up on infiltrating into the capital. That means attacks there are rare but there was one this week with a home invasion that resulted in a woman being killed in Tarmiya in the northern section of Baghdad province. That area is a long time insurgents stronghold with cells still operating there. Now, pro-Iran groups account for the vast majority of incidents in Baghdad with 6 out of 7 during the third week of September.

Diyala had the most security incidents as usual because it is the main base for the Islamic State in Iraq. There were 9 attacks total. There was an assault upon a checkpoint and four villages attacked. In September six towns have been attacked up from 3 in August, and 2 each in July and June. These are meant to drive people out of rural areas and enforce taxation. That’s a sign that IS might be starting a new offensive this month. In response, there was a sweep through the Diyala River and the Hashd have begun setting up defensive positions around villages in Khanaqin in the northeast and Azim in the north. IS usually concentrates its operations in Muqdadiya in the center and Khanaqin, but the first three attacks during the week were in the north in Azim.

There were 5 incidents in Kirkuk. There was a gun battle with the Hashd that left four of them dead, a checkpoint was shot at, and a policy convoy was hit by an IED.

There was a gun battle in Kanous Island during a security sweep there in Ninewa along with 3 other incidents. The government also had an operation in the southern region of the province. Attacks are rare in Ninewa accept during IS campaigns.

Besides the two attacks by pro-Iran groups there were three more by insurgents in Salahaddin. One was a gun fight, but more importantly a Hashd brigade commander was killed by an IED. This was part of the war attrition with IS singling out officers for assassination. The week before there was an attempt upon a police general in Diyala, and the first week of September another Hashd commander ended up dead.

Iraq Newspaper, "ISIS terrorists announces the killing of an officer by planting a bomb in his car and killing and wounding a number of the police and the army," 9/21/20

Al Maalomah, "The army and the popular crowd carry out a security operation south of Mosul," 9/15/20,

- "The Hashd and the security forces carry out a security operation in Hawi al-Azim and South Dhuluiya," 9/19/20

- "The Popular Mobilization Forces thwarted an exposure to ISIS in Diyala," 9/18/20

- "The Popular Mobilization Forces thwarted an exposure to ISIS south of Samarra," 9/18/20

- "An IED Explodes, Targeting An American Convoy In Ishaqi District In Salah Al-Din/More," 9/18/20

- "A woman was killed in an explosive device explosion north of Muqdadiya, in Diyala," 9/19/20

- "An unidentified attack leaves one victim and two injuries from one family in Ninewa," 9/20/20