Review Saddam, His Rise and Fall 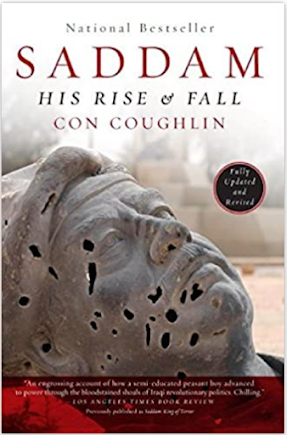 Saddam, His Rise and Fall by Con Coughlin is a wildly inconsistent biography of Saddam Hussein. On the good side it connects Saddam with the history of Iraq providing lots of background to his life and the country he ruled. One bad aspect was Coughlin liked sensationalist stories which were easy to find about a dictator like Saddam. The bigger problem was that it bought into Britain and America’s justification for the 2003 invasion that Iraq had WMD and was connected to Al Qaeda. Coughlin’s thesis was that Saddam made an unexpected rise through the Baath Party and then onto leading Iraq.

When just considering Saddam’s life and political career the book does a pretty good job. It starts off with his early life growing up with his widowed mother in poverty. He went to live with his uncle Khairallah Tulfah who was an Arab nationalist and a major influence upon his nephew’s life. He calls Tulfah a Nazi, but he was more anti-British than a supporter of Hitler. Saddam moved to Baghdad with his uncle and there he joined the Baath Party. He was always known as an enforcer and wasn’t a soldier or college student like the vast majority of party members. The 1963 coup proved pivotal because he moved into the Baath Party militia, then the party’s intelligence organization, and finally to head the security division. That gave him access to instruments of power that he would later use to eliminate his opponents and allow him to quickly rise up the ranks of the Baath. He also attached himself to General Ahmad Hassan al-Bakr who would later become president. After the 1968 coup when the Baath took power Saddam proved adept at playing politics and became Bakr’s second. He was put in charge of one important mission after another such as the 1970 deal with the Kurds, an alliance with the Soviet Union, the nationalization of the oil industry, and economic development programs. He also put allies in key positions such as his cousin as Defense Minister and his half-brother as director of general intelligence. In 1979 he was able to push Bakr out and assumed control of the state. This was Couglin’s main point. Saddam came out of nowhere from an obscure and poor family. He was never taken seriously initially by the leading Baath members as a result. Yet, he took his time, made the right connections, got the right posts that gave him power, constantly eliminated his enemies to eventually became the leader of his country. That’s by far the best part of the book and there’s plenty of history to provide a background to Saddam’s rise.

The problems with Saddam, His Rise and Fall however are apparent from the very start. The prologue which was written right before the 2003 invasion of Iraq is full of unsubstantiated and false stories about Iraq and Al Qaeda. Even though Coughlin raises doubts about some of them the fact that he keeps using one report after another points to him believing something was there. For instance he included the story that 9/11 hijacker Mohammed Atta met with an Iraqi intelligence officer in Prague right before the attack, but then said the CIA and FBI didn’t believe it. He used two Iraqi defectors who claimed Iraq set up a terrorist training camp that included how to hijack planes like happened on 9/11 and might have included Al Qaeda members. He had another report that Saddam used Al Qaeda to assassinate Iraqi exiles and they planned to bomb Radio Free Europe in the 1990s. The last chapter which was written right after the 2003 invasion ended included more like this such as Iraq distributing WMD to its troops that could be used in 45 minutes. It’s obvious that he believed what the Bush and Blair governments along with exile groups like the Iraqi National Congress and Iraqi National Accord accused Iraq of. Ironically his Epilogue which was written in 2005 said that everything he wrote was wrong about WMD and Iraq-Al Qaeda ties. This was an obvious lapse in research by the author. For instance, there were reports questioning Iraq’s WMD before the invasion and the U.N. inspectors went to every major site the U.S. and British named and found nothing. He included the latter but dismissed them as falling for an Iraqi deception campaign to hide its banned weapons; another example of him repeating what Bush and Blair said.

Even before that when he wrote about Saddam’s life Coughlin showed a predilection for gossipy stories. For example he wrote that when Saddam was a child he liked to heat an iron bar and stab passing animals with it which was an early sign that he enjoyed inflicting pain. Another time he relates a story that in 1982 Saddam feared Bakr might try to return to power so he sent some doctors to poison the former president. When dealing with Saddam’s eldest son Uday who was a rapist and sadist there are plenty more. Because he includes these it explained why he went for all the accounts of Iraq having WMD and links to Al Qaeda because they were the same type of sensationalism. Obviously when you have a long running dictator like Saddam there are going to be plenty of anecdotes like these. It makes a biography juicy but it doesn’t mean they should have been included.

In the end, Saddam, His Rise and Fall has many ups and downs. If you just stuck to Saddam’s biography, which is the vast majority of the book, it would be decent even with the extraneous stories. The beginning and end however can be completely dismissed because as Coughlin admitted himself he was completely wrong about WMD and Al Qaeda ties. That might raise questions about how good of a biographer he was overall, but the main points of Saddam’s life are well known and he covered them all.