Review The Master Plan, ISIS, Al-Qaeda, and the Jihadi Strategy For Final Victory 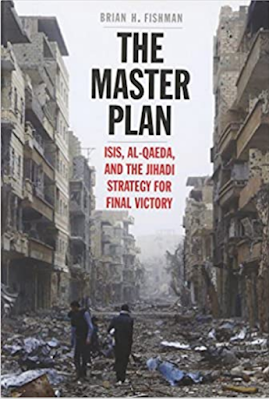 Brian Fishman’s The Master Plan, ISIS, Al-Qaeda, and the Jihadi Strategy For Final Victory has an inherent problem. The start of the book tries to link a plan for the future jihad written by Al Qaeda’s security chief and the book The Management of Savagery with the Islamic State. The problem was the Islamic State came up with its own strategy and had a history of not listening to Al Qaeda. If that part was removed The Master Plan would be a very good book on how Zarqawism developed and IS’s relationship with other Islamists.

Fishman’s book gets its title from a tract written by Al Qaeda’s security chief Sayf al-Adl. He drew up a seven point plan for the jihad. The first, was the Awakening when 9/11 would draw attention to Al Qaeda. Second was to fight the U.S. in Iraq. Third would be to expand the war to Syria, Lebanon and eventually Turkey and Israel. Fourth would be to attack governments across the Middle East while the U.S. was growing weak from years of fighting. Fifth would be declaring a caliphate. Sixth was a global confrontation where the world would be divided between the caliphate and the unbelievers. Last would be the final victory. Fishman also adds the book The Management of Savagery written by Abu Bakr Naji which called for brutal violence as a tool to mobilize Muslims to the jihad. Fishman speculates that Naji and Adl provided the overarching ideas that explained the Islamic State’s actions. The problem is that the Islamic State wasn’t influenced by Naji or Adl and formed its own style of jihad. What Fishman seemed to be doing was trying to highlight these three interesting events by saying they all built upon each other when they were actually separate. By the end of the book the author even seems to have given up on his own argument admitting that IS never read Adl’s piece and didn’t even mention Naji. That’s an unfortunate start because the rest of the book is generally very good.

The best part of The Master Plan is to lay out the development of the Islamic State’s ideas. That began with Abu Musab al-Zarqawi’s first trip to Afghanistan with the Islamic scholar Abu Mohammed al-Maqdisi. He argued that Muslim rulers should be rejected unless they imposed sharia. In the aftermath of the U.S. invasion of Afghanistan Zarqawi ended up in Iraq’s Kurdistan with Ansar al-Islam. There he saw an attempt to create Islamic rule and the use of the Internet to distribute messages both of which would inspire Zarqawi. He also borrowed from the 13th Century writer Ibn Taymiya who claimed most Muslims were apostates, could be excommunicated for their crimes, and then attacked. This could be done by any Muslims as well which was part of Zarqawi’s populist appeal because he moved authority from religious scholars to the lay person. He also came to consider action and fighting the defining moment for jihadists rather than writing and critiquing. Men of action not men of letters were going to determine the struggle. In turn, Zarqawi felt that violence could help bring people to his cause by polarizing societies. He also believed that the jihad could redeem people like it did with him. This led to the Islamic State rejecting all states. Its call for a caliphate to return Islamic law to the world. Using an extensive information campaign to spread its message and gain recruits. It’s justification for targeting Muslims. It’s call for all true believers to come join it. Finally, Zarqawi started a civil war in Iraq and exploited the war in Syria to try to rally Sunnis to his cause against the Shiite led government in Baghdad and Allawite rule in Damascus. Fishman does an extensive job going through all of these different ideas and how they built upon and contradicted other Islamic thinkers. The author did some in depth research and that’s all shown here.

The rest of the book lays out the development of the Islamic State. There was the attempt to rally all the other jihadist groups to its cause in Iraq and when that failed they went to war with them. That led to IS’s first defeat at the hands of the sahwa. Fishman covers how the war in Syria opened the door to the group’s expansion eastward and then conflict with other groups there. There’s the financing, how the caliphate was ruled, and more. Much of this is covered in other books. What the author adds is the staying power of the group. It likes to say that it will “remain” and its history shows that. It lost almost all its leadership and was largely expelled from central Iraq by 2008, and yet its cellular structure and its ideas continued to drive it and it made a comeback marked by the 2014 seizure of Mosul in Iraq. When the book was written IS was being beat down again but Fishman points out the vast differences between the countries fighting it such as the U.S., Iran, and the Saudis who didn’t agree and therefore would not be able to provide a unified front to defeat it. That would give it the chance to remain once again. Fishman proved right when he predicted the fight against IS would turn into a long running low intensity war.

Overall, if Fishman had dropped his opening thesis this would have been a much better release. He wanted to bring together Al Qaeda, Naji and the Islamic State, but didn’t even seem to believe his own argument by the conclusion. Much better is the discussion of IS’s ideas, strategy and tactics. He also warned that the loss of territory for the group didn’t mean its defeat and it still had the means to survive for a very long time, which it has done. Reading The Master Plan you are impressed by Fishman’s research, but that start really throws things off.