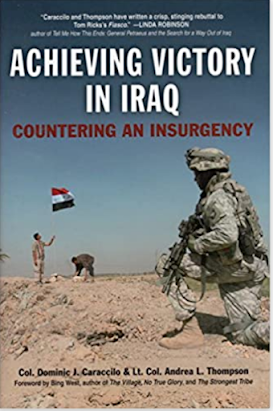 I’ve never read an introduction and felt like it completely discredited everything the authors had to say until I opened Achieving Victory In Iraq, Countering An Insurgency by Colonel Dominic Caraccilo and Lieutenant Colonel Andrea Thompson, two Iraq war veterans. The book was aimed at members of the armed forces and military strategists and lays out the two colonels’ ideas on how the U.S. could win in Iraq using counterinsurgency tactics. The problems arose from the fact that the authors were so committed to the Iraq War that they tied themselves into pretzels and used all kinds of verbal gymnastics to argue that the U.S. had a winning strategy and had always been on the right path. They contradict themselves so much and had so many flaws in their argument that this might easily be one of the worst books about Iraq.

The opening to Achieving Victory In Iraq was full of a maddening amount of contradictions. The authors started by saying that Tom Ricks in his book Fiasco was wrong to say that the U.S. had no strategy in Iraq after the invasion. Instead they claimed that the policy had always been to turn over security to Iraqis and that hadn’t changed. Later they write that in fact right after the overthrow of Saddam Hussein, the Americans did not have a plan, all they were concerned about was protecting their own forces. Next the two discuss some of the success that the U.S. made in Iraq that included a huge increase in demand for electricity that they say was a sign of the new freedoms Iraqis enjoyed. The fact that the government couldn’t meet that demand and there have been constant blackouts ever since 2003 wasn’t mentioned. Finally, they justified the invasion by saying that Saddam had a tremendous ability to wage war so conflict with the U.S. was inevitable so it was better that America struck first then to have waited for Iraq to act. The book was written from 2007-08 after no weapons of mass destruction were found, no Iraq-Al Qaeda ties existed, researchers were going through the Baathist archives, and Saddam had been interrogated by the U.S. There was no evidence that Saddam had any intention of attacking America. These are just a few of the problems the book has, and it hadn’t even gotten to its main point about counterinsurgency. With a start like that it was difficult to continue reading because it was apparent that Caraccilo and Thompson couldn’t make an argument if their life depended on it. Backing the war was more important to them than getting their facts right.

The book’s issues continue in the following chapters. They have one about French strategist David Galula who they call the godfather of counterinsurgency. Galula has been widely praised by Western writers for his insights and vast personal knowledge of battling insurgents. The problem is that the entire chapter contradicts the authors claim that the United States always had a winning strategy in Iraq. If General David Petraeus didn’t introduce Galula to American forces until 2007 then what the authors say can’t be true. Then they talk about how the U.S. had to let the Iraqis come up with their own solutions to ending the conflict in their country. What follows however are all American initiatives like having the Awakening and Sahwa who were tribes and former insurgents organized by the U.S. against the Islamic State be integrated into the Iraqi security forces, and power being decentralized away from Baghdad to the provinces. Neither of those were supported by the Iraqi government, so what was the U.S. to do if they were supposed to put the Iraqis in the lead and they didn’t like America’s strategy? Finally, there was another section all about how a withdrawal from Iraq without fulfilling major benchmarks would be a defeat. Again, they contradict themselves by quoting U.S. Ambassador to Iraq Ryan Crocker who said that those benchmarks may not be achievable so the U.S. had to focus upon smaller successes. Of course, just after the book was written and published President Bush signed an agreement with Iraq that set a withdrawal date not based upon any criteria. Just like the introduction Caraccilo and Thompson get caught in contradiction after contradiction and can’t seem to understand how to prove an argument. That means when they do have a legitimate point like advocating for Galula it gets completely lost in their poor writing.

There are few books that can match the mess that is Achieving Victory In Iraq, Countering An Insurgency. Simply by reading the introduction you could tell how bad it would be. The authors desperately tried to prop up the Iraq War as not only being just but winnable. They then proved themselves wrong over and over again. If they had just admitted at the start that the U.S. had screwed up Iraq and finally found a winning formula with the Surge in 2007 they would have been much better off. They essential did that but in a roundabout manner while saying that it didn’t happen. Even after that they continued to make inane arguments and got so much of Iraq wrong. That makes Achieving Victory In Iraq a train wreck that never ends.