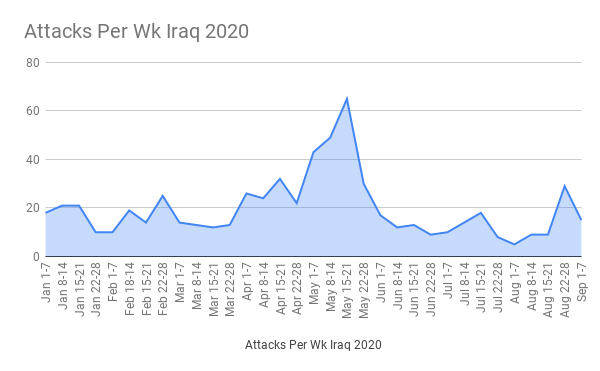 The number of security incidents reported in Iraq declined in the first week of September compared to the last full week of August, but the types of attacks showed that the Islamic State may still be in the process of starting a new summer offensive. Pro-Iran groups also kept up their steady pace of operations against the Western presence in the country.

There were a total of 20 incidents reported during the first week of September in Iraq. Five of those were by pro-Iran groups. That included IEDs on convoys carrying supplies to the U.S. in Babil, Baghdad, Dhi Qar. The incident in Babil left one wounded while in Baghdad two more were injured including a policeman. Rockets were also fired at a British security company and the Baghdad International Airport both in the capital. This recent wave of attacks started in June when the U.S. and Iraq opened talks over a new security agreement which Iran is against. In August they reached a new level with 24 incidents as Prime Minister Mustafa Kazemi travelled to Washington D.C. and Tehran wanted to embarrass him. September has started off at that same pace.

They left 13 dead and 26 wounded. That consisted of 2 Hashd al-Shaabi, 4 civilians, and 7 Iraqi Security Forces (ISF) that died and 11 civilians and 15 ISF that were injured. Diyala had the most with 11 casualties followed by 8 each in Anbar and Kirkuk, 5 in Salahaddin, 4 in Ninewa, 2 in Baghdad and 1 in Babil.

Incidents in Anbar are a sign that the Islamic State might still be planning a late summer-fall campaign. There was a rare car bombing in Ramadi that left 3 wounded. The last vehicle bomb was back during the first week of February. A headquarters of the Border Guard was also assaulted in the Qaim district in the west by the Syrian border. That left two dead and three wounded. The province is mostly used as a smuggling and logistics hub for the insurgency. Attacks are very rare there and these types of incidents are unusual today across Iraq. They only happen in Anbar when IS goes on the offensive.

The government also launched three sweeps in Anbar during the week. One was in the northeast by the Salahaddin border. Another was by Akashat in the west by the Saudi border, and the last was in south Qaim by the Syrian border.

Besides the three attacks by pro-Iran groups there was a rare IED in Baghdad as well. That went off in Yusifiya which is in the south. IS has given up on its attempt to infiltrate into the city and that has resulted in a drop in incidents there. Now pro-Iran units are responsible for the overwhelming number of attacks in the capital.

Diyala saw the most violence as usual. A checkpoint was shot at, there was a gun battle with soldiers, two villages were attacked and a Hashd brigade commander was killed by a sniper initiating another exchange of gunfire. Three of the five incidents took place in the Khanaqin district in the northeast where IS is exploiting the gap between the ISF and the Kurds. There were two security sweeps through the northeast as well.

Kirkuk had more evidence of an IS offensive. A suicide bomber hit a checkpoint on the Kirkuk-Tikrit highway resulting in one dead and six wounded. The last suicide bomber occurred during the second week of July in Baghdad during the last militant campaign. There was also a gun battle and a town was hit by mortar fire.

There were just two incidents in Ninewa both in the west. An IED went off in the Tal Afar district and there was a shooting in the Sinjar district. Violence is rare in both areas with most attacks taking place in the south. It’s another sign that IS is picking up its operations.

An IED went off in Thar Thar in western Salahaddin that left five casualties. That happened during a security sweep through the area.

It’s still too early to tell whether a new IS offensive is beginning or not. The increase in attacks compared to most of August along with a suicide and car bomb however all point to one starting.

- "Villages Repel IS Attack in Absence of Iraqi Forces in Disputed Areas," 9/5/20

Buratha News, "The launch of a military operation to track down ISIS in Wadi Janat in Diyala," 9/1/20

Al Maalomah, "A bomb exploded on a convoy of the International Alliance, as it passed through Babylon," 9/2/20

- "The crowd and the army carried out a security operation west of Anbar," 9/7/20

A-"A young man was killed when a shell fired by ISIS hit the town of Bashir in Kirkuk," 9/6/20

- "Dismantling a bomb south of Kirkuk, which was targeting the security forces," 9/3/20

- "The Popular Mobilization Forces carry out combing operations in search of ISIS hideouts in the countryside of Khanaqin," 9/7/20

- "The Popular Mobilization Forces clear 85 square kilometers in the desert west of Anbar," 9/5/20

- "A Security Deployment Plan On The Border Between Diyala and Salah al-Din To Avoid A Mass Exodus Of Border Villages," 9/1/20

- "Security media: A policeman and a civilian were injured in the explosion that targeted a convoy of a security company contracted with the International Coalition," 9/6/20

- "Security Source: A Policeman And A Member Of The Tribal Mobilization Martyred Northwest Of Mosul," 9/6/20

Shafaaq News, "A civilian was injured in a new attack on the coalition supplies in Babylon," 9/2/20

Al Sumaria, "A bomb targeting a truck of a contracting company with the International Coalition in Dhi Qar," 9/3/20

- "Federal Police repelled an attack against ISIS and the arrest of one of its members in Kirkuk," 9/2/20