Review Iraq and Gertrude Bell’s The Arab of Mesopotamia 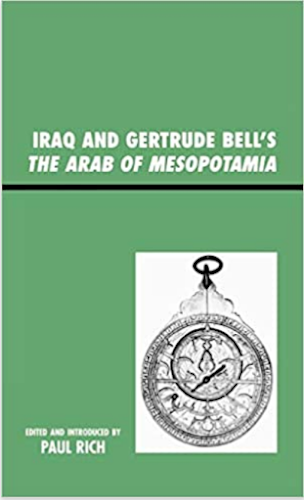 Iraq and Gertrude Bell’s The Arab of Mesopotamia is a collection of two pamphlets Gertrude Bell wrote for the British War Office during World War I. The first was The Arab of Mesopotamia written in 1916 while Bell was in Basra. The second was Asiatic Turkey from 1917. They were propaganda pieces to be read by British officers who were coming to govern Iraq after the English conquered it during the war. They provide an overview of some of the people of the Ottoman Empire and a justification for why the English were there. That means she criticizes everything the Ottomans did and praises the British.

This is a revised edition of the book so there are two introductions by Paul Rich. He explains that the papers were written as handbooks for British officers being sent to fight in Iraq and that they were released to justify the war there. He emphasizes that Bell wrote about how the people of the Ottoman Empire were being freed, but that in reality Bell was an imperialist who had dreams of creating a new Middle East under British rule. That’s exactly what London tried to do with the Iraq Mandate initially based upon how India was run. They completely ignored the wishes of the Iraqis which led to the 1920 Revolt all of which Rich believes were lessons the U.S. could have learned from but didn’t when it invaded Iraq in 2003. The introductions provide a good context for Bell’s two pieces and her world view. The idea that the Americans made the same mistakes as the British in Iraq is also widely argued by historians.

When it comes to Bell’s writings one main theme is the people of the Ottoman Empire in Asia. She describes how the Arab tribes migrated north into Mesopotamia with some becoming settled and others remaining nomads. She goes through a couple of the major groups like the Shammar and sheikhs such as Ibn Saud who would go on to found Saudi Arabia. There were market towns like Zubayr in what is now Basra province which was founded by Sunni tribes from Arabia. She mentions the Kurds as having a primitive civilization and attacking and sacking Christian villages. The religion of the Mandeans and the Yazidis are described and she repeatedly calls the latter devil worshippers which was how the Muslims saw them. She based all this off her firsthand experience traveling through the Ottoman lands before the war. That’s how she got a job with the British government when World War I started to write about all the different tribes so that the British might understand the environment they were entering into. She gained a huge amount of knowledge which she put to paper while also looking down at them as Orientals.

The other main part of her work was to denigrate the Turks and explain the British presence. Bell wrote that the Ottomans barely ruled Asia only having a presence in the few cities and towns while the rest were run by their own rules and traditions. She claimed that the Turks were trying to destroy Arab culture by playing divide and conquer with the tribes. Conscription was also condemned claiming  having Arab sons from Baghdad going off to Constantinople and Mosul to serve in the military was oppressive. Ottoman plans to build railroads through Asia were seen as part of a German-Turk plot to centralize power, increase military strength and unite the empire which would be a direct threat to British. In comparison, Bell argued that the British would develop the neglected lands of Arabia by bringing efficient administration. For example, under the Ottomans all the people were mainly judged in Sunni sharia courts, but under the British each sect would be able to choose their own court to go to under its supervision. It would also leave the tribes to their own devices which would ensure peace in the land as long as they respected trade and the towns. The British also built railroads but they connected major towns and ports and allowed commerce. Here Bell’s writing is easily transparent. She wants things both ways. The Turks for instance are criticized for barley ruling Mesopotamia but when they tried it was bad. Building railroads was only good if the English did it. Ultimately, the Ottoman Empire was despotic while the British one was enlightened.

Iraq and Gertrude Bell’s The Arab of Mesopotamia is a very fast and interesting read. There’s the travel log part of it which explains what Iraq was like when the British conquered it. The other part is justification for empire building. To Bell the British were going to administer Iraq like it always should have and bring prosperity to all. Like Rich points out in his introduction it sounds so familiar because it was repeated by the Americans almost a century later.