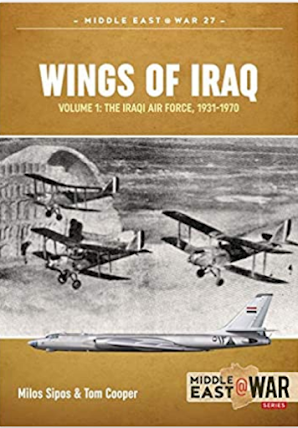 Wings of Iraq is the first of a two part series on the history of the Iraqi Air Force. Iraq had one of the largest and most combat experienced air wings in the Arab world having taken part in several wars, coups and uprisings. The authors Milos Sipos and Tom Cooper weave together Iraqi history with the development of the force since its use was always wrapped up in politics. Their view is that the Iraqi Air Force constantly grew from the 1920s to the 1970s but with no real strategy behind it.

The Iraqi Air Force was greatly influenced by the British who founded Iraq. The first Iraqi pilots were trained by the British and their equipment all came from that country as well. The air force was created for internal defense initially and its basic doctrine came from the British. That was shown in the 1920 Revolt when Iraqis rose up against the British Mandate. The British lacked enough troops to secure the country so they used a tactic the authors called air policing where a town was surrounded by ground forces and then was bombed into submission by the Royal Air Force. This became the main way the British controlled Iraq as there were constant uprisings by tribes and the Kurds. When Iraq gained independence in 1932 it would use the exact same tactic against those same groups.

The major theme of the book was that the Iraqi military was highly ambitious from the start and constantly tried to expand but with no real plan behind it. In 1921 the Iraqi army was officially founded. By 1927 the Iraqis finally got British permission to create the Royal Iraqi Air Force and in 1930 Iraq bought its first planes from England. The pilots were sent for training in Britain and would form the leadership of the force up until the 1970s. Their view was that Iraq needed a large and modern air force to put down internal revolts which were a constant and to defend against first Persia and then Israel. When General Qasim seized power in a coup in 1958 he wanted to move away from the British who had dominated the country and began going to the Soviet Union for weapons.  The Soviet jets were much cheaper than western ones and easier to maintain but were technologically behind which became a bigger issue as the years passed by. The Air Force command adapted that equipment to the British doctrine they were still employing. At the same time, the Iraqi military never effectively learned how to use the Air Force. It was still used for air policing into the 1970s for instance. That turned out to be able to contain the various Kurdish rebellions but not put them down. It also didn’t need Soviet MiGs to do that but that was what it was intent upon purchasing. In the 1948 and 1967 Arab Israeli Wars it was given no strategy nor intelligence and acted on an ad hoc basis trying to bomb whatever they found. Israel was one of the major threats and yet the Air Force never developed any intelligence on that country nor a plan on how to confront it.

The book has plenty of in depth information on all the various revolts, coups and wars the Iraqis were involved in up to 1970. For instance in the Six Day War the Iraqis handled themselves well even though they had no real idea what they were doing. The Iraqis had no information on the Israeli forces and their maps all dated from before 1948. They were told to go bomb bases they weren’t even sure existed or where exactly they were. Once the Iraqis bombed Israel it decided to destroy the H3 base in Anbar the Iraqis were operating out of. It launched three raids upon the airfield and the Iraqis defended it well such as one engagement on June 7 when the Iraqis along with a Jordanian and Pakistani pilot shot down 3 Israeli planes while losing 2 of their own. On the flipside the faults with their Soviet equipment showed up such as the heat seeking missiles that often missed because they were confused by the heat of the region. The authors give all the history behind these events to give plenty of context about how things started and what were the politics surrounding them.

Sipos and Cooper did an excellent job in this first book on the Iraqi Air Force. There are tons of very rare pictures, charts on the Iraqi planes and commanders, maps on their bases, and lots of detailed history to back up all the different times the Air Force was used. In their conclusion the two authors lay out their main argument that the Iraqis always wanted more but without any real idea of why other than the general ideas of putting down the Kurds and defending against Israel and Iran. They also went for quantity over quality buying more and more Soviet planes. That would serve them up to the 1960s but cost them in the future wars they would face.