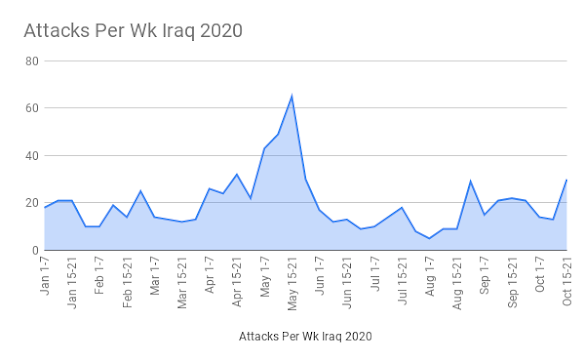 After a dip in attacks during the second week of October they shot back up to the highest level in two months the following week. All of the security incidents but one were by the Islamic State as pro-Iran groups halted their attacks on western targets after announcing a truce. At the same time Asaib Ahl al-Haq was accused of kidnapping and murdering a group of men in Salahaddin.

There were 30 security incidents reported in Iraq from October 15-21. 29 of those were by the Islamic State, the highest amount since the last week of August. The week before there were 13 incidents by IS and 14 the first week of October.

25 people died and 26 were wounded during the week. That was made up of 3 Hashd al-Shaabi and 22 civilians that lost their lives and 5 Hashd, 6 Iraqi Security Forces (ISF) and 15 civilians that were injured. Salahaddin had the most casualties with 14 followed by 10 in Diyala.

On October 17 twelve men were kidnapped from Farahat in the Balad district of Salahaddin. Later 8 of their bodies were found. Asaib Ahl Al-Haq (AAH) were immediately blamed for the incident. This caused a huge controversy in the governorate with officials demanding that the Hashd withdraw as a result. This is the first time AAH has done something like this for quite some time. It was another example of how the government does not control the forces nominally under its command and they feel like a power onto themselves.

IS carried out small operations in Anbar, Babil, Baghdad, Irbil, Salahaddin, and Ninewa. There was a shooting in Garma in western Anbar that left two wounded. That province has few incidents because it’s mostly used for smuggling. 2 IEDs went off in Babil, one in Jurf al-Sakhr in the northeast and one in Hilla in the north. The later was aimed at a parliamentarian from the Hikma list which killed his nephew. These were the first IS incidents in the province in almost a month. There was a rare attack upon a village in the western Abu Ghraib district of Baghdad that left 3 wounded. Incidents in the capital are usually just shootings or IEDs. An assault on a town was a major operation more often seen in places like Diyala or Kirkuk. Two IEDs exploded in the Makhmour district of southern Irbil. That is one of the disputed territories IS has tried to exploit this year. There are usually only incidents there during insurgent offensives. It looked like the militants were starting one of those this fall but now it just looks like they have picked up their attacks from a temporary low from July to August. Besides the Asaib Ahl Al-Haq incident there was a gun battle with the Hashd and an army convoy was hit by a bomb in Salahaddin. Attacks have constantly fluctuated up and down there. Finally, a checkpoint was attacked and there were two IEDs in Ninewa. Like Anbar, there are usually few incidents in Ninewa because it’s a logistics rather than operational center for the Islamic State.

For the second week Diyala did not see the most violence in the country. There were four IEDs, three more destroyed, a shooting, and a village was hit by mortars. The biggest incident was at the end of the week when IS set up a fake checkpoint in the Khanaqin district in the northeast, killed three people and kidnapped two more. Half of the incidents this week were in Muqdadiya in the center. Diyala is the insurgent’s main base in the country.

After no incidents the second week of October there were 10 the next week in Kirkuk. Three villages were attacked during the week that included burning cars and houses. A Hashd brigade commander was killed and a police regiment commander was wounded as well. This was part of IS’s war of attrition against the security forces which has targeted officers. The attacks on the towns could also point to the insurgency attempting to assert its control over rural southern Kirkuk as it has done in regions of Diyala.

Al Maalomah, "A terrorist wearing an explosive belt was killed south of Kirkuk," 10/17/20

- "A farmer was injured in the explosion of an explosive device and the fall of mortar shells within the Sheikh Baba sector, northeast of Baqubah," 10/16/20

- "A farmer was killed in an explosive device explosion on the outskirts of Al-Abara district in Diyala," 10/15/20

- "A Popular Mobilization fighter was wounded by an explosive device northwest of Hilla," 10/17/20

- "Thwarting a terrorist plot to target farmers in Al-Abara district, in Diyala," 10/16/20

- "Two civilians were injured in an explosive device explosion south of Mosul," 10/15/20

- "A senior official and one of his bodyguards were injured in an explosion in Kirkuk," 10/18/20

- "Two wounded in an armed attack and the arrest of two brothers in Fallujah and Baghdad," 10/20/20

Al Sumaria, "Four members of the Popular Mobilization Forces were wounded after an attack by ISIS in Salahaddin," 10/17/20