Review Suicide Bombers In Iraq, The Strategy and Ideology of Martyrdom 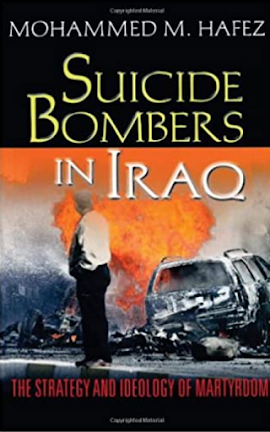 Suicide Bombers In Iraq, The Strategy and Ideology of Martyrdom by Mohammed Hafez is an excellent analysis of the Iraqi insurgency and its use of suicide missions. It starts out by categorizing the Iraqi militants into two general categories and then explaining why one of those used these types of attacks. Hafez’s thesis was that suicide bombings were unique in Iraq and arose from the specific circumstances in the country and internationally.

Hafez divided the insurgents into two broad groups that used different tactics. One was Iraqi nationalists. Many of those used Islam but as a motivational force. These included organizations such as the Islamic Army of Iraq, the 1920 Revolution Brigades, the Mujahadden Army, and others. They wanted to return Sunnis to power or at least make them equal to Shiites and Kurds in the government. The other were Salafis and the Baathists that wanted state collapse to either create a caliphate or put the Baath back into office. This included Al Qaeda in Iraq, Ansar al-Sunna and the Baathist General Command of the Mujahadeen of the Armed Forces. Only the latter of the two types of groups employed suicide bombers because it furthered their goal of destroying the new Iraq. Al Qaeda in Iraq for instance targeted Shiites with suicide bombings to start a sectarian civil war and sow chaos.

The second major issue covered was how the suicide bombings in Iraq were unique. Unlike previous uses of the tactic such as in Lebanon or Sri Lanka many foreigners carried out the attacks. Hafez asked why people from other countries would come to Iraq to blow themselves up? The author came up with several issue such as other Islamist bases being lost like in Afghanistan and a new front opening in Iraq with the U.S. invasion. That was seen as an act of American aggression throughout the Muslims world. Groups like Al Qaeda in Iraq played on other themes such as Muslim humiliation at the hands of their governments and the West and claiming that martyrdom was an act of redemption. There were networks across the Middle East, North Africa and Europe which Islamists used to bring in foreigners. Finally, Sunni grievances over the loss of power and the rise of a Shiite led government were a motivation for Iraqis. All together those were strong draws for both Iraqis and others to commit suicide bombings.

Hafez did a great job with both his research and creating a larger picture of the insurgency in Iraq to explain the use of suicide bombings. In the process he showed how many other theories on the issue such as trying to end injustices or sacrificing for their communities or trauma alone could apply to Iraq because so many foreigners were involved. The Iraq War, the Salafis and Baathists presented a specific situation and groups which had not been seen before and were able to motivate both Iraqis and people from other countries. Many of those same issues were at play after the book was published in 2007 to help explain the Islamic State which drew in even more people internationally than its predecessor Al Qaeda in Iraq making Hafez’s work still relevant to this day.