Review Iraq Between the Two World Wars, The Militarist Origins of Tyranny 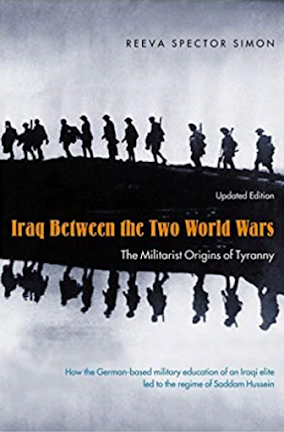 Iraq Between The Two World Wars, The Militarist Origins of Tyranny by Reeva Spector Simon is a very well written and interesting book about how Germany influenced Iraq, shaped its concept of pan-Arabism and led to the 1941 Anglo-Iraq War. Simon argues the Iraqi military’s ideas on how to unify Iraq and create an Arab federation had their origins in the German model of nationalism and militarism, which they had initially learned about during the Ottoman period. This led the army to enter politics and overthrow governments in coups and eventually side with the Axis during World War II. Simon believes that these ideas continued afterward leading to the end of the monarchy and eventually Saddam Hussein. That last part is the only crack in the author’s argument.

Simon begins by asking why Iraq became pro-German and how that was combined with pan-Arabism. This started in the late-Ottoman era when in the 1880s Germany sent its first group of advisers who sought to reform the empire’s military. They pushed Prussian ideas of a common language, history, culture and the military being the keys to creating a nation state based upon the recent unification of Germany. Many Iraqi officers were educated under this system and would later become the new elite once Iraq was founded. They came to believe the way to achieve pan-Arabism was by following Germany. For instance no Arab nation had ever existed but Arab language could be used as a unifying theme. Here the author lays down the ideological foundation of Arab nationalism in Iraq that was heavily indebted to Germany. The military education many Iraqi officers received under the Ottoman period were full of Prussian ideas about how to build a nation. This would shape Iraq’s future leaders to move towards authoritarianism and militarism when they took power.

Next the book goes into how this ideology was implemented in Iraq and its effects. As soon as Iraq was created in 1920 King Faisal pushed for conscription as a way to bring Iraq’s diverse population together in a national army. Iraq’s politicians also increasingly turned towards the military in their rivalries for power. By 1936 the army directly moved into politics with Iraq’s first coup. It then became a partner in the government eventually becoming dominated by four officers known as the Golden Square. They were against democracy and saw their main goal as liberating Syria from the French and Palestine from the British to achieve their pan-Arab dreams. When World War II broke out they thought the Axis were going to win and pushed for ties with them as a way to achieve not only Iraqi independence from British influence but their Arab nationalist goals. That led to the 1941 coup and the war with the British. The author does a great job going through the development of the Iraqi military and the major political figures who started off seeing the army as a pawn in their power struggles but eventually had to deal with it as an equal. Again, the German ideas on how to unify a people and that the military was the soul of the nation led to Iraq’s shift away from democracy. That led to the emergence of the Golden Square and their decision to go to war in 1941.

The conclusion of Iraq Between The Two World Wars, The Militarist Origins of Tyranny delves into post-World War II Iraqi history arguing that Germany’s impact eventually led to Saddam Hussein. The author thought the 1958 coup by the army that ended the monarchy marked the final end of liberal ideas in Iraq that the British had introduced. Instead the military would run things just as the Prussians had argued. Where Simon goes off course is when she says Saddam Hussein was the final outcome of German influence. When the Baath took power in 1968 for instance they brought back many of the pan-Arab themes of the 1930s that talked about Iraq’s great history as a way to unify the people. Saddam also had schools valorize the 1941 war as an example of Iraq fighting for its independence. The problem is Saddam would shed all ideology and focused upon a cult of personality to rule which meant Germany was no longer important. Saddam was also not a soldier and subjugated the army to his whims to ensure his reign. This is the only fault in what is otherwise a very convincing argument.

Iraq Between The Two World Wars is an excellent history of Iraq between the two world wars. Simon presents a thoroughly researched thesis that German ideas of nationalism and militarism had a profound impact upon Iraq. Both Iraqi politicians and the officer corps were educated in these ideas and shaped how they ruled the country, their concept of pan-Arabism, and how the nation’s foreign affairs were run. This led the military to play a dominant role in politics, the 1941 Anglo-Iraq War, and eventually the overthrow of the monarchy. The only problem is the section on Saddam otherwise this is a fantastic text.