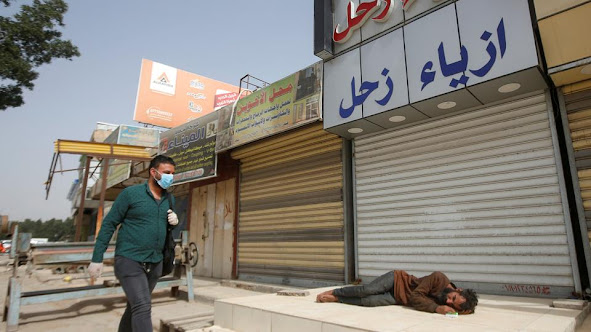 (Reuters)
The United Nations issued a report warning that Iraq’s economy might be harder hit by the oil collapse and COVID-19 pandemic than originally predicted. Already the early forecasts had been downgraded with Iraq’s GDP expected to shrink by 10% in 2020 and its budget deficit to be at 30% of its GDP.

Structural problems were the biggest issue for Iraq during this dual crisis. Its overdependence upon oil which doesn’t create jobs and a small non-oil sector that generates little for the government means the state is going broke while there is not enough jobs available for the growing population. Government spending is dominated by wages and pensions which makes it difficult to cut them in the short term leading the state into a rapidly increasing debt. The U.N. predicted this could last until 2022. COVID restrictions have limited the private sector, and most businesses have responded by laying off workers. That meant unemployment and poverty have increased. The poverty rate was expected to rise from 20% in 2017-18 to 31% in 2020. 42% of the population was expected to be vulnerable to poverty as well.

The ruling elite have reacted to this situation by borrowing to cover its public employees and pensioners but nothing else. There is even resistance to borrowing more out of the belief that the state’s finances are actually secure and the oil market will recover by the start of 2021. That shows that the political class are so set in their ways that they can’t even mount a response when the country is facing its greatest economic crisis since 2003.

AIN, “The Finance Committee diagnoses a defect which the government has fallen into with the issue of salaries and presents a method to save a trillion per month,” 10/5/20

Al Maalomah, “Deputy: We found that the state does not need to borrow, and we will investigate to find out the true motives of the Finance Ministry,” 10/10/20