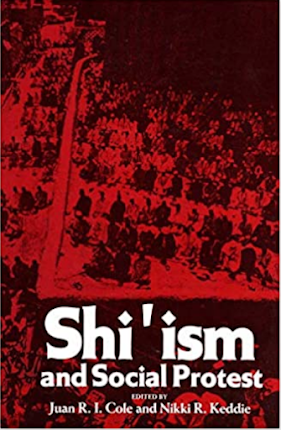 Shi’ism and Social Protest is an anthology edited by Juan Cole and Nikkie Keddie. Its purpose was to try to fill the gap in academia about Shiite activism across Asia, which was dominated by the Iranian Revolution and little else. Like any collection the book has its ups and downs. There are good chapters on Shiism across the Middle East, Iran and Lebanon. Those are contrasted with a chapter on Egypt that doesn’t have to do with Shiites and another on how Soviet scholars viewed Shiite movements both of which seemed out of place. There’s also a selection on the Dawa party of Iraq which gets a lot of the details about the group wrong. Shi’ism and Social Protest was also published in 1986 which means it can provide some background, but some of it is also out of date.

The best part of the book are the chapters on Iran and Lebanon. The first deals with how the Iranian Revolution upset the status quo in the Middle East and was seen as a threat by countries like Iraq leading to the Iran-Iraq War, the Saudis who believed Tehran was stirring up its Shiite population, and the Gulf States after an attempted uprising in Bahrain in 1981. Then there’s a chapter analyzing what kind of regime Khomeini led. It used the phrase authoritarian populism with a mass base amongst the poor which was able to displace the liberal, secular and other Islamist elements of the Iranian Revolution and solidify its hold over the state. Finally, there are two chapters on Lebanon focusing upon Musa al-Sadr and the Amal movement. They emerged out of the interplay between Christian militias, Palestinians, and two Israeli invasions. There are two chapters on Lebanon however which cover the exact same material and the second one doesn’t add much to the first so it was an odd decision to include both. Arab countries around the Persian Gulf still see Iran as a threat to this day and there’s good information attempting to explain the Iranian Revolution.

There are some selections which have not stood up to the test of time. The chapter by famed Iraqi researcher Hanna Batatu on the Dawa Party of Iraq is a case in point. Batatu starts off fine pointing out the rise of Communism in the 1940s and secularism greatly reduced the number of religious Shiites. Then the Arif government was considered sectarian. That all led to the birth of Dawa Iraq’s first religious Shiite party. Then the rest of the history of the group is mostly wrong. Batatu for instance claims that Ayatollah Mohammed Baqir al-Sadr was not associated with the party at first when it was formed in the 1950s and the two didn’t come together until the Iranian Revolution. He also wrote that Dawa spread through Karbala and Baghdad. More contemporary research shows that Sadr was the spiritual leader of Dawa from the start and that Dawa was seen as a Najaf based party and faced opposition in other cities as a result. There was hardly any information on the party when Batatu was writing because it had been forced underground by Saddam and then into exile, so the article was a reflection of its period.

Finally, there are chapters that just don’t seem to belong in such a volume. There’s a chapter on Iran’s influence upon opposition parties in Egypt for instance that focuses upon the Muslim Brotherhood that supported the Iranian Revolution and a left Islamic leader. Neither of those were Shiite so what is it doing in a book about that community? Then the closing section is on how Soviet scholars viewed Shiites. Again, this is not about Shiite movements so why was it included?

Overall, Shi’ism and Social Protest has some interesting chapters but it’s pretty inconsistent. This is part and parcel of any anthology and this is no exception.