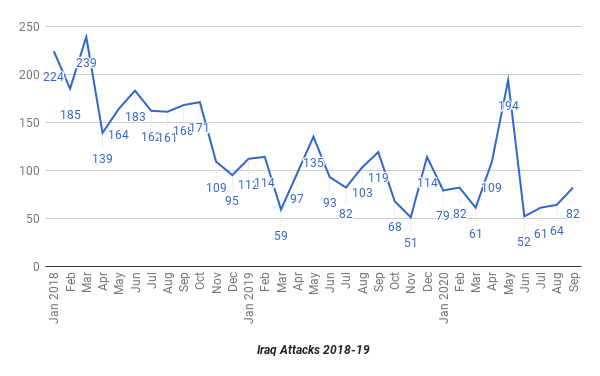 For the third month in a row security incidents have increased in Iraq. This was due to growing signs of a fall offensive by the Islamic State and pro-Iran groups increasing pressure upon the Kazemi government.

There were a total of 113 security incidents reported in Iraq in September 2020. That was up from 88 in August, 73 in July and 60 in June. This was due to a rise in operations by both the insurgency and pro-Iran factions of the Hashd. The number of attacks by the Islamic State went from 52 in June to 61 in July to 64 in August and 82 in September. Likewise incidents by pro-Iran groups have gone from 8 in June to 12 in July to 24 in August to 31 in September. Hashd factions connected to Tehran picked up their attacks when talks between the U.S. and Iraq over a new security agreement began in June and reached a new level in September when Prime Minister Mustafa al-Kazemi met with President Trump in Washington D.C. These are meant to embarrass the government and they have as the U.S. has threatened to close its embassy as a result, impose sanctions and carry out military strikes upon the Hashd. The Islamic State on the other hand appear to have started a fall offensive. This is interesting because violence has gone up while IS has shut down some of its networks. There are hardly any attacks in Baghdad for instance, and still few in Anbar and Salahaddin.

In September pro-Iran groups shifted from rocket attacks upon Baghdad’s Green Zone and military bases that housed Americans to setting up IEDs against convoys carrying supplies for the U.S. In August, 13 of 24 incidents were rocket attacks versus 10 bombings of trucks. In September that changed to 9 rocket and mortar incidents against 22 IEDs. 7 of those convoy attacks took place in Babil and 7 in Baghdad, followed by 4 in Salahaddin, 2 in Dhi Qar, 1 in Diwaniya and 1 in Najaf. The increase in attacks has also led to growing casualties amongst Iraqis with 6 killed and 10 wounded during September. On September 28 rockets aimed at Baghdad Airport fell short and landed on a house killing 5 and wounding 2 which finally brought out some public outrage about these incidents. 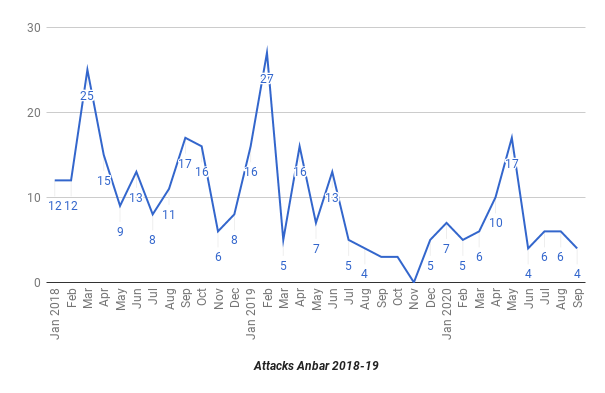 The number of incidents in Anbar actually declined from 6 in August to 4 in September. The types of incidents were more serious however including a car bomb in Ramadi, a car bomb being destroyed, and a third one exploding on some insurgents, plus a border guard HQ being attacked. There had not been a successful vehicle bomb in Iraq since February 2020. Anbar is used almost exclusively as a logistical and smuggling area by the Islamic State. Three car bombs showed that IS was increasing its operations. 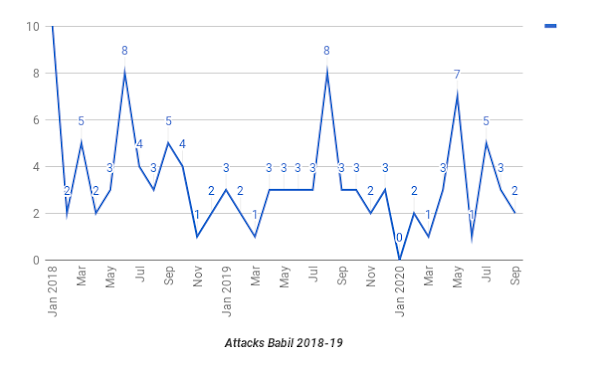 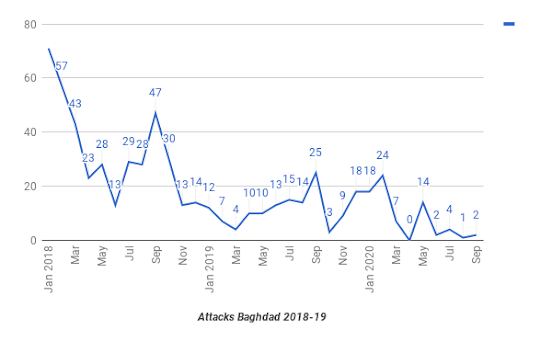 There were few incidents in Babil and Baghdad as well. Attacks went from 5 in July to 3 in August to 2 in September in Babil. Likewise there were 4 incidents in Baghdad in July, 1 in August and 2 in September. Attacks have remained sporadic in Babil for the last two years. IS tried infiltrating into the capital in the fall of 2019, the winter of 2019-20 and in the spring of 2020. Now those networks into Baghdad have almost completely shut down. 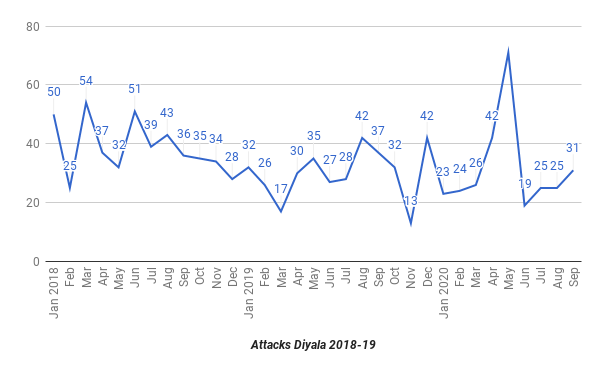 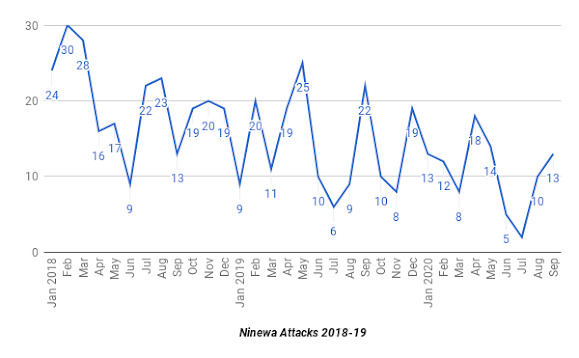 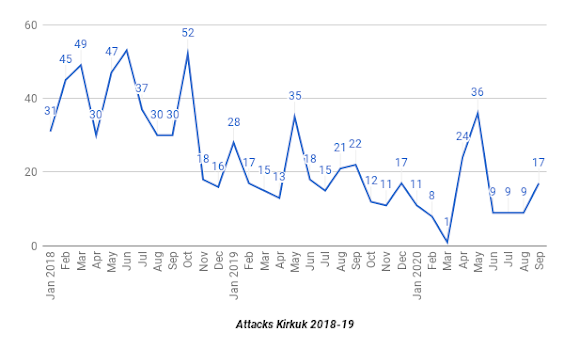 Attacks continued to climb in Diyala and Ninewa with a spike in Kirkuk. Incidents in Diyala went from 19 in June to 25 in July, 26 in August and then 31 in September. During that period shootings went up along with attacks on towns. In Ninewa there were 2 attacks in July then 10 in August and 13 in September. Finally, there were three months straight with 9 incidents in Kirkuk before hitting 17 in September. That included a rare suicide bombing attack upon a checkpoint,  two more suicide bombers who were surrounded and detonated their devices. The last successful suicide bombing in Iraq occurred in July. In central and northeast Diyala and southern Kirkuk the Islamic State has focused upon rural control, driving out people from towns, enforcing taxation and intimidation of the local security forces. Ninewa, like Anbar is mostly used for logistics and smuggling. The increase in violence there is because of the fall offensive. 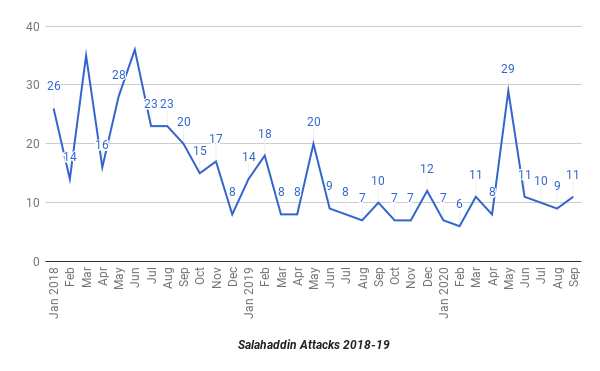 Finally, in Salahaddin security has remained largely the same. There were 11 incidents in June, 10 in July, 9 in August and 11 in September.

During September there were six security sweeps through Diyala, five in Ninewa and one in Kirkuk. Many of these went through core IS areas such as Khanaqin in northeast Diyala and yet they were not able to slow the pace of operations by the insurgents. Not only that but the militants have been able to kill high ranking officers of the security forces during some of these sweeps showing they are not deterred.

That brings up the last element of the Islamic State’s current strategy which is a war of attrition against the security forces. That began in the spring. From March to August the security forces made up the majority of the casualties. In September that changed to civilians accounting for most of the dead and wounded. IS still targeted officers during the month with a Hashd Brigade commander being killed by a sniper in Diyala, another dying from an IED, and a police regiment commander losing his life to an IED, both in Salahaddin.

NINA, "A security element and two civilians were injured in a car bomb explosion in Ramadi," 9/1/20

Al Sumaria, "The commander of a police regiment was killed and an officer and two members of staff were wounded in an explosive explosion in Salahaddin," 9/30/20