Iraqi Govt Can’t Get Its Numbers Right On Poverty 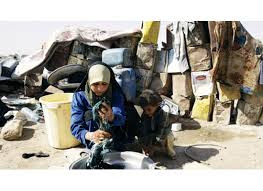 (Baghdad Post)
Iraq’s current economic crisis has led to millions of its citizens to fall into poverty. The problem is the government has been inconsistent about what the current rate is. On January 4 for instance, a financial advisor to Prime Minister Mustafa al-Kazemi said that poverty had reached 30% of the population. He blamed COVID for more than 2 million families falling into this situation. The day before however the Planning Ministry had the figure at 40% of Iraq or 16.6 million people. The week before a spokesman for the Planning Ministry went with 30%. So who was right? It appears the higher number is how badly the nation is doing right now. As early as May the Planning Ministry announced the poverty rate had hit 40% due to the drop in oil prices and COVID.

Why can’t the government get its numbers right? One is a lack of coordination. It’s obvious that officials are not consulting with each other to find out what the actual rate is. The other is just incompetence. If poverty struck 40% six months ago there is no excuse for the authorities to get it wrong now. Unfortunately this happens all too often in official announcements from the government which likes to play down crises and obfuscate things.

Iraq News Network, “Ministry of Planning: 40% of the Iraqi population lives below the poverty line,” 1/3/21