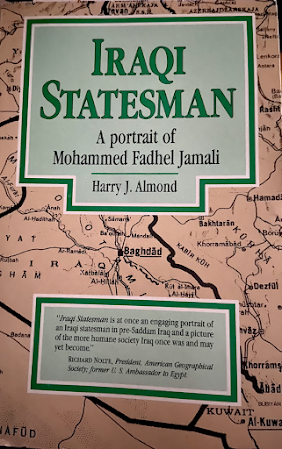 Mohammed Jamali had humble beginnings growing up in Baghdad under the Ottomans. What changed his life was going to a secular school that opened the door to a university education, international travel and then joining the Iraqi government under the monarchy where he worked in the Education Ministry, was the Foreign Minister several times and even held the prime ministership for a short period. Iraqi Statesman, A portrait of Mohamed Fadhel Jamali is a biography of his life by a friend Harry Almond. Despite the sympathetic view Almond did do his research into Iraqi history to back up what he wrote. Almond portrays Jamali as a committed educator and Iraqi nationalist who wanted Arab countries to gain their independence and unite.

Almond highlights how education had a lifelong impact upon Jamali. He didn’t have much growing up in Khadmiya which at the time was not part of Baghdad city yet. He started off going to a religious school, but then went to a secular school run by the Society of Union and Progress formed by the Young Turks during the Ottoman era. He then attended a Persian school, started teaching that opened up the door for him to go to what became the American University in Beirut in 1921. There he learned about science and modernization and was introduced to pan-Arabism, ideas that would shape the rest of his life. He then got a scholarship to get his PhD at Columbia University in New York City in 1929. He wrote his thesis about Bedouin education where he argued that tribes could be the basis of a nation and therefore nationalism and modern ideas needed to be included in their education. He also advocated for women to go to school as well. Almond writes that going to school literally introduced the world to Jamali. He was able to leave his traditional life in Khadimiya and became westernized as a result. He would go on to advocate for the modernization of Iraq and for Arab independence and unity afterward.

Going to university also opened the door for Jamali to work in the government. He started in the Education Ministry where he developed curriculum, bought textbooks and hired teachers. He wanted to offer students the same opportunities he had which led him to set up a program where the best academic students were eligible for foreign study. In 1943 Jamali was transferred to the Foreign Ministry. He would go on to be Foreign Minister eight times. He advocated three main things while holding that position. First was independence for Arab countries such as Syria and Lebanon that were under French rule and Algeria, Tunisia and Morocco that were French colonies. Second he thought all the Arab countries should unite. He constantly worked on Iraq and Syria joining together but that failed. He did preside over Iraq and Jordan creating a federation. Last, he was an opponent of Zionism believing that it was a new form of European colonialism. As a result he wanted Palestine to be independent and democratic state which would of course preclude the establishment of Israel. Some Iraqi historians have talked about Arab nationalists versus Iraqi nationalists during this period. The pan-Arabists were most concerned with foreign affairs and trying to get the Arab countries to unite while the latter were more interested in developing Iraq. Jamali would fall into both camps. He saw education as a way to build an Iraqi nation and also believed those states should then form a union. He was far more successful at the former however. The Arabs proved full of rivalries and differences that would constantly get in the way of their pan-Arab dreams.

Iraqi Statesman is an extremely short read. It has some good insights into Iraqi politics during the monarchy mixed in with a bunch of international conferences that Jamali went to such as the founding of the United Nations and the Non-Aligned Movement. Those sections get a little long as the author includes extended speech extracts by not only Jamali but other participants. Still it’s a good biography of Jamali and his achievements and failures.