Iraq’s Oil Exports and Revenues Both Up In December 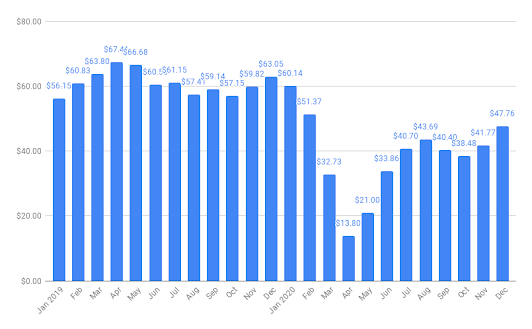 Petroleum prices have steadily increased since the summer thanks in part to production quotas implemented by the OPEC+ group. That was good news for Iraq which is the most oil dependent country in the world. The result was that in December Iraq had the highest revenues in 10 months.

The rise in production came at a good time because petroleum prices were up. In December a barrel of Iraqi crude sold for $47.76 per barrel the highest price since February. That meant it earned $4.213 billion, again the highest figure since February. This was more good news for Iraq. It’s draft 2021 budget is based upon a $42 per barrel price so it might earn more money than estimated. That would help the deficit which is currently at $49 billion the highest ever.

For the year Iraq ended up making an average of $3.493 billion a month in petroleum revenue down from $6.543 billion in 2019. The government needs around $5 billion just for government salaries and pensions each month. That will go up under the 2021 budget that has added more workers and is the largest budget ever. Prices for Iraqi oil averaged $38.80 per barrel down from $61.09 last year.

AIN, “Oil announces its exports and revenues for the past month,” 1/1/21