Review Iraq at the Crossroads: State and Society in the Shadow of Regime Change

Dodge, Toby and Simon, Steven, Edited by, Iraq at the Crossroads: State and Society in the Shadow of Regime Change, Oxford, New York: Oxford University Press, 2003 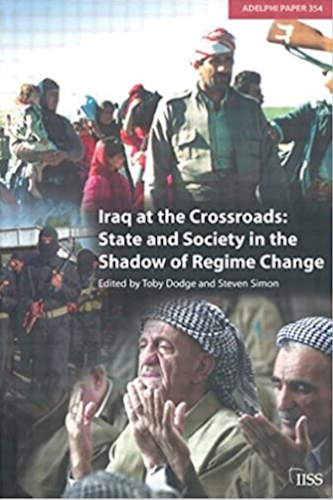 Iraq at the Crossroads: State and Society in the Shadow of Regime Change came out of a conference held in October 2002 at the International Institute for Strategic Studies to discuss Iraqi society and politics and how the country might react to the impending U.S. invasion. The book is an anthology of the papers presented by Judith Yaphe, David Ochmanek, Toby Dodge, Isam al-Khafaji, Amatzia Baram, faleh Jabar, Gareth Stansfield and Michiel Leezenberg. It’s interesting to see what the authors predicted and what actually happened after the overthrow of Saddam. More importantly the later part of the book has interesting chapters on Iraq under Saddam.

Some of the forecasts were spot on and easy to spot. Judith Yaphe for instance didn’t believe that the U.S. could confront Iraq like it did in Afghanistan. First, Iraq would need a large ground invasion force. Second, Yaphe predicted picking a post-Saddam leadership would be difficult because Washington had no plan for how to select one. Third, she noted that Iraqis would not like a government selected by the Americans nor a U.S. occupation. David Ochmanek was able to guess many of the tactics the Americans would use for the invasion such as psychological and information campaigns to convince the Iraqi army not to fight, targeted air strikes and a fast drive to Baghdad that would end the war quickly. Toby Dodge believed that the constant purges of the military by Saddam would mean it would put up little resistance to the invasion. Isam al-Khafaji warned that members of the security forces would be recruited by the new elite to be join the militias which happened with Moqtada al-Sadr and his Mahdi Army for example. Ochmanek, Jabar and Khafaji all warned that former regime elements such as the Special Republican Guard and internal security agencies could start an insurgency. What these authors held in common was a belief that the Bush administration would have an easy time taking Iraq, but a hard time holding it. The U.S. went into the country with no post-war plans which immediately cost it the initiative. It was forced to react to situations on the ground instead of shaping them which helped lead to things like an insurgency. These experts were able to predict this turn of events while the American government wasn’t.

There were also several chapters that provided very good histories of the Saddam era. Baram went over the development of the Iraqi military and security services and how they went from being dominated by officers from Baghdad and Mosul to ones from Salahaddin where Saddam was from. Likewise top officials in the Baath party also came from that province as a means to ensure control over the country. Gareth Stansfield and Michiel Leezenberg discussed the divisions within Kurdistan between the two main parties the Kurdistan Democratic Party and the Patriotic Union of Kurdistan. After the Gulf War Kurdistan was given its autonomy and the two parties set about creating governing systems just like the Baath and used the new regional government and foreign aid to create patronage networks to rule. This system of governance persists to this day. It’s these chapters that make Iraq at the Crossroads really worthwhile to read. They are much more interesting than the early ones that are just focused upon predicting how the 2003 invasion would go. They give a sense of how the Baath and the Kurds ran the country and the problems they created.

Iraq at the Crossroads is a very short read at under 200 pages. At first it doesn’t seem like it is that essential since it is just about how the U.S. invasion could work out. Thankfully the second half of the book deals with the Iraqi government and society under Saddam Hussein. The authors provide plenty of insight into how Saddam used tribes and clans close to him to ensure that he would stay in power for instance. It therefore goes beyond its original limited mandate.