Review Baghdad Diaries: A Woman’s Chronicle of War and Exile 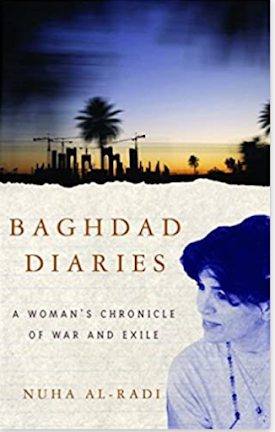 Baghdad Diaries: A Woman’s Chronicle of War and Exile by Nuha al-Radi covers the 1990s to the eve of the 2003 U.S. invasion of Iraq. It is broken up into three broad sections. The first is about the Gulf War, the second part is during the sanctions era that followed, and the third is when al-Radi left Iraq and moved to Lebanon. The book covers al-Radi’s day to day activities like seeing her family and friends, taking care of her garden and dog Salvador Dali, her artwork, along with some observations about what was happening in Iraq at that time. Her diary gives a personal insight into what happened to the middle class in Iraq during the end of the Saddam Hussein era.

Al-Radhi’s family used to be part of the Iraqi elite. Her father was an ambassador under the monarchy. She spent her early years growing up in India when her dad was posted there. Later she went to school in London in the 1960s. She became a sculptor, a painter, and a ceramist. By the time she started her diary her family was middle class in Baghdad.

One of the best parts of her book takes place during the Gulf War. At first she could not believe that war was going to happen. Then the bombing started for weeks and weeks. She talked about how she, her family and friends all reacted. For example, she did her art, helped around the house and took care of the large orchard in her backyard. One of her neighbors rode a tricycle because he thought he would never see his grandkids again. Many left the capital for the countryside to escape the bombs. Almost immediately the power went out, the phones went dead and so did the water because it was pumped using electricity. That meant there was no refrigeration and they had to eat most of their food or preserve it before it went bad. She asked why the war was hurting civilians. She wrote, “The West seems to have only three images of Arabs – terrorists, oil sheikhs, and women covered in black from head to toe. I’m not even sure that they know if there are ordinary human being who live here [Iraq].” Here you have a mix of al-Radi’s daily life, what was happening in her Baghdad neighborhood as well as her thoughts on the war. It was an interesting and engaging combination.

Her chapter called “Embargo” covers what happened to the middle class during the U.N. sanctions period. There were immediate changes to society such as robberies and kidnappings as people became desperate. There were shortages of basic goods. For instance she talked about how people couldn’t get new tires so they drove around on bare ones and many times there were stolen. There was also hyperinflation with people having to carry bags of money to buy things at the store. Many people began leaving Iraq for neighboring countries like Jordan and Yemen to try to find jobs, which was what she eventually did. Iraq once had a large and thriving middle class as the nation benefited from the dramatic rise in the price of oil with the 1970s oil embargo. The sanctions destroyed this group of people. Their money became useless and they were with the lower class struggling to get basic necessities while driving out those that could leave. Understandably she blamed the United States and became resentful for it maintaining the sanctions which again hit the public instead of the leadership.

The last section on al-Radi’s time in Jordan and Lebanon is the least interesting. She got to travel to places like the United States, Yemen, Abu Dhabi and Mexico. She showed off her art in exhibitions, took part in projects and dined with foreign officials and diplomats. She got to be a person of the world again, which was impossible in Iraq with government restrictions. Unfortunately it is just not as engaging as the first two parts of the book. Reading about her going to Mexico for instance is just not as good as her time in Iraq.

Iraqi voices are largely absent from books in English on Iraq. The vast majority are about the U.S. wars with the country or Saddam Hussein. Baghdad Diaries: A Woman’s Chronicle of War and Exile is not only by an ordinary Iraqi, but a woman as well, which is even more rare. It is a very quick read and gives an individual account during a very difficult time in Iraq with wars and international sanctions.