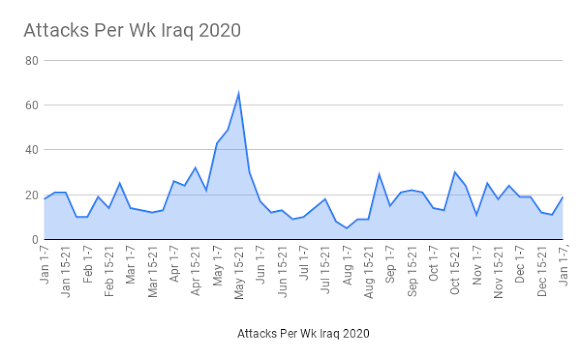 Violence remained largely unchanged in Iraq from December to the first week of January 2021. There were a reported 21 incidents from January 1-7. Two of those were by pro-Iran groups leaving 19 by the Islamic State. The last full week of December there were just 9 attacks by the insurgents but the first two weeks of the month there were 19 incidents each.

Groups loyal to Iran carried out two bombings of convoys carrying supplies to the United States during the week. The first was on January 1 in Samawa, Muthanna followed by another on January 4 in the Samarra district of Salahaddin. These factions did not carry out any large scale attack on January 3 the anniversary of the deaths of Iranian Revolutionary Guards Quds Force commander General Qasim Soleimani and the deputy head of the Hashd Commission Abu Muhandis. Instead they have kept up a steady pace of bombings and rocket attacks on American targets. 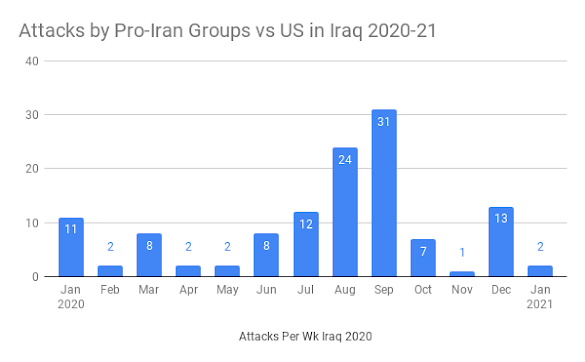 They left 13 dead made up of 5 civilians and 8 members of the Iraq Security Forces (ISF) and another 19 wounded consisting of 2 Asayesh, 3 Hashd al-Shaabi, 3 civilians and 11 ISF. As usual 24 of the 32 casualties came from the security forces as the militants have been conducting a war of attrition against them since the spring of last year.

Starting in December IS changed its tactics in Anbar which had mostly been peaceful because the insurgents were using it as a logistics hub to move in men and material from Syria. Now the Islamic State is back to carrying out regular attacks there. That resulted in four incidents at the start of January with one checkpoint shot at and three gun battles.

There was a shooting and a clash with the insurgents in Baghdad one in Tarmiya in the north and the other in Radwaniya in the south. IS is no longer interesting in hitting capitol city itself and now just has small scale attacks like these in the perimeter.

There were four incidents in Diyala. There was one shooting, two checkpoints were hit and there was some mortar fire. An attack in Helwan on January 2 that led to two soldiers dying and seven being wounded led to two officers being dismissed for incompetence. A report in Al Mada claimed that up to half the soldiers posted in the province were ghost employees existing only on paper so that their commanders can collect their salaries. This is a very common practice and highlights the corruption prevalent throughout the government.

An IED killed three soldiers and left one injured and gunfire left one policeman wounded both in the southern Daquq district of Kirkuk.

Ninewa had the most incidents in Iraq. Two old IEDs from the war versus IS left two dead and three wounded. Two bodies were also discovered one in Mosul and the other in Qayara in the south that showed signs of torture. Also 93 bodies were pulled from the rubble of west Mosul. It’s believed that there could be still hundreds more buried in the rubble four years after the conflict ended because so little of that part of the city has been rebuilt.

Besides the attack on the convoy there was also a home invasion of an army major’s house the Yathrib district of Salahaddin that left one dead.

Finally in southern Sulaymaniya and IED wounded two Asayesh. There hadn’t been any attacks in that province since last April making this a very rare incident.

Bas News, "Another US Logistic Convoy Targeted in Southern Iraq," 1/1/21

Buratha News, "93 bodies were exhumed in the old Mosul neighborhoods," 1/5/21

Al Maalomah, "Three ISIS terrorists were killed in an armed clashes in the western regions," 1/5/21

- "Three members of the tribal crowd wounded in western Anbar," 1/6/21

- "Thwarting an attack by a terrorist at an army checkpoint near Helwan in Diyala," 1/5/21

Al Mada, “ISIS incubates in Diyala reveal the ghost file: half of the army is only on paper,” 1/4/21

- "An employee was killed and three others were wounded when a bomb of ISIS remnants exploded west of Mosul," 1/7/21

- "An ISIS element was arrested and an unidentified body was found in the right side of Mosul," 1/5/21

- "Two soldiers wounded in an ISIS attack on a military post northeast of Baqubah," 1/2/21

Shafaaq News, "The death toll from Khanaqin attack increased to one dead and 6 wounded, from the army," 1/2/21

- "ISIS is carrying out an attack on the Tribal Mobilization Forces in western Iraq," 1/3/21

- "A soldier dies of wounds he sustained in a previous ISIS attack in the outskirts of Khanaqin," 1/5/21

Al Sumaria, "A bomb targeting a convoy to support the international coalition on the Samarra road," 1/4/21

- "A security force stopped a terrorist attack on one of the watchtowers in Tarmiya," 1/5/21