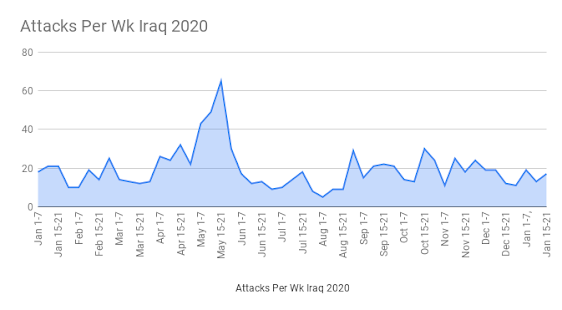 The third week of January was marked by a mass casualty bombing in the heart of Baghdad in a popular square with markets that left over 140 people dead and wounded. The last such attack took place in September 2019 when a car bomb hit Karbala but that only left 17 casualties. Baghdad hadn’t seen such an incident since July 2019 when two suicide bombers caused the deaths of five people and wounded another 20. The last truly horrific event in the capital was in January 2018 when two suicide bombers hit the exact same square with 143 casualties. 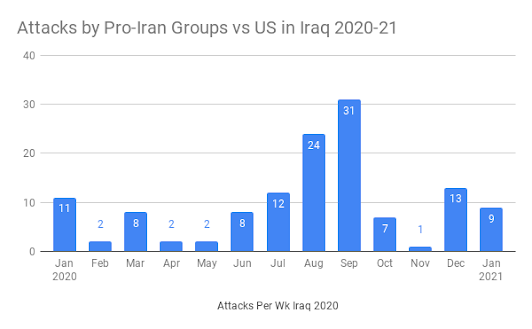 Since November 2020 the number of weekly attacks has remained relatively stable. There were 20 incidents total from January 15-21 but three of those were by pro-Iran groups. Three convoys carrying supplies for the U.S. were hit by IEDs during the week, two in Baghdad and one in Dhi Qar. That makes 9 attacks so far this month by these organizations versus 13 in December. That left 17 incidents by the Islamic State compared to 13 the week before and 20 the first week of January. That’s been about the average for the last two months.

52 people were killed made up of 17 Iraqi Security Forces (ISF) and 35 civilians and 133 were wounded including 7 ISF, 11 Hashd al-Shaabi, and 115 civilians. Baghdad obviously had the most casualties with 33 dead and 111 wounded. If not for the capital bombing members of the security forces would make up the majority of casualties as the Islamic State has launched a war of attrition against them.

IS is back to regular operations in Anbar. There were three IEDs during the week spread across Qaim, Haditha and Rutba. Before December there were hardly any incidents in the province as the insurgents used it mostly for moving men and material in from Syria. Since then there have been bombings and shootings every week. They are still few in number but it is a decided change from before.

Another area where IS may be ramping up its work is in the Jurf al-Sakhr district in northeast Babil. There were three attacks there with power towers being blown up, a sniper incident, and an IED on a checkpoint. All of these took place in the same area, Bahbahan. There were only four incidents total in the province in December, 3 in November, and 2 each in October and September. Jurf is the militants favorite target because it is a large Kataib Hezbollah base with lots of targets. The attack on the power towers also points to a new campaign by the militants to go after infrastructure.

Besides the two bombings by pro-Tehran groups a checkpoint was hit by a sniper in the Tamim district in the north, an  old IED went off in the south, and of course there was the twin suicide bombing in Baghdad. 32 people died and 110 were wounded in that attack. For the last two years IS has attempted to infiltrate into the city. It was able to get into the center and set off multiple bombs on a single day a few times but then backed off. It’s not clear whether this was due to new security measures or it simply decided to focus upon its rural strongholds. Likewise only time will tell whether the suicide attack was a one off or will start a new trend of assaults upon Baghdad and/or mass casualty bombings. The sparsity of such incidents in the last year, only three car bombs and seven suicide bombers versus 15 vehicles bombs and 12 suicide bombers in 2019, point to the group’s networks being disrupted and barely able to operate so a new wave of such attacks is unlikely.

Diyala saw the most incidents as usual with four. A power station was destroyed, along with a shooting, a body being found, and an infiltration attempt being foiled. All four took place in the Khanaqin district in the northeast which has been one of the most violent areas of the country since IS’s defeat in the war. Again, the assault on the power station was part of the new IS campaign.

For the second week there were no incidents in Kirkuk. This is a decided change since the Islamic State has de facto control of much of the southern section of the governorate.

There were three IEDs in Ninewa during the week. The first two, one in Tal Afar and one in Sinjar both in the west left a large number of casualties. The first saw 5 soldiers die and two more wounded while the second killed 9 and injured 2. One of the deaths was an army regimental commander. High ranking officers have been targeted since last spring as part of IS’s war of attrition against the security forces.

Things were relatively quiet in Salahaddin where only a group of IS fighters was intercepted.

Baghdad Post, "Eight members of the crowd were wounded by an explosive device in western Anbar," 1/16/21

Al Hurra, "Two Iraqi soldiers were killed in a bombing in western Anbar," 1/21/21

Iraq Newspaper, "Lieutenant Colonel Haider Adel, commander of the 2nd Regiment, 15th Division in the Iraqi army, was killed by a booby-trapped hut planted by ISIS north of Tal Afar," 1/17/21

Al Maalomah, "4 people were killed and wounded including two policemen as a result of the Jalawla attack," 1/15/21

- "The Popular Mobilization Forces fend off a terrorist attack in Jalawla, Diyala," 1/20/21

- "The Popular Mobilization Forces thwarted an infiltration attempt by ISIS in Salahaddin," 1/16/21

- "Thwarting a terrorist attack on the outskirts of Jalawla sub-district, Diyala," 1/15/21

- "A Body Of A Meat Seller Killed By ISIS Found And His Body Mutilated In The Outskirts Of Jalawla In Diyala," 1/16/21

- "An IED Explodes On A Convoy Of Logistical Support For The Int'l Coalition South Of Baghdad," 1/20/21

- "A popular crowd fighter was wounded by sniper fire north of Babylon," 1/19/21

- "Targeting a logistical convoy of the International Coalition with an explosive device west of Baghdad," 1/21/21

- "Two members of the Popular Mobilization  Forces were wounded by an explosive device north of Babylon," 1/21/21

Shafaaq News, "A girl was killed and her sister was seriously injured in an explosion in western Anbar," 1/17/21

- "Iraqi authorities announce the killing of 12 people and wounding five others in the bombing at the entrance to Karbala," 9/20/19