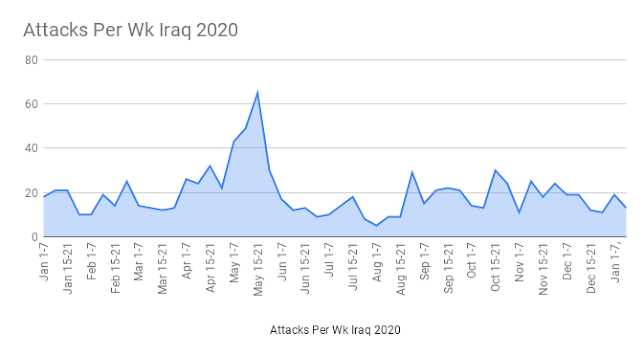 Security remained relatively stable for the second week of January. Attacks by the Islamic State remained in the teens while pro-Iran groups carried out four more operations against American targets in Iraq.

There were a total of 16 incidents reported in the media versus 22 the week before. Four of those were by groups aligned with Tehran. Three convoys carrying supplies to U.S. forces were hit by IEDs in Baghdad, Babil and Muthanna while a fourth bomb was dismantled in Dhi Qar.

11 people were killed including 3 civilians, 3 members of the Iraqi Security Forces (ISF), and 5 Hashd al-Shaabi. Another 5 were wounded made up of 1 civilian and 4 ISF. Diyala had the most casualties with 9. As usual 12 of the 16 casualties were from the security forces as IS continues its war of attrition against them. This is meant to intimidate them and force them out of areas under militant control.

Anbar had only one incident which was a shooting in Rutba that left three soldiers dead. Starting in December IS began carrying out regular attacks once again in the province after having been quite there for months.

There was one other attack in Babil when two soldiers were wounded by gunfire in the Jurf al-Sakhr district in the northeast. Almost all IS related incidents in the governorate occur there because it is a large Kataib Hezbollah base that the insurgents like to target.

IS assaulted a checkpoint and an army base in Diyala during the week. The biggest event was when an IED killed a Hashd brigade commander. Officers have been one of the main targets of the war of attrition.

In Salahaddin there was an IED on a Hashd HQ in Tikrit, and two shootouts, one during a security sweep.

Finally, an IED went off in Sulaymaniya. This is the second time this month there has been an incident in the province showing that IS is looking for new targets of opportunity. In the second half of 2020 the group was regularly carrying out operations in south Irbil but now it seems to be moving east probably using Diyala as its base.

Al Maalomah, "3 civilians were killed in a terrorist attack on their vehicle on al-Rutba Highway, west Anbar," 1/10/21

- "The commander of the Fifth Regiment and his assistant in the Baqi Imams Brigade was martyred in an explosion in Diyala," 1/11/21

Al Masalah, "Reports of an IED attack on a convoy in support of the International Coalition in Hilla and Nasiriya," 1/9/21

- "An IED Explodes On An Int'l Coalition Logistical Support Convoy South Of Baghdad," 1/8/21

- "A Second IED Explodes On A Convoy Of Logistical Support For The Int'l Coalition In Samawah," 1/8/21

-"A security source reveals details of the killing of a shepherd in northern Diyala, who was executed by ISIS for belonging to the popular crowd," 1/11/21

NI-"Two members of the army were wounded in an armed attack north of Babylon," 1/13/21

- "Two members of the defense crowd were killed when an explosive device exploded in Diyala," 1/11/21

Shafaaq News, "Thwarting an attack on an international coalition convoy in southern Iraq," 1/9/21