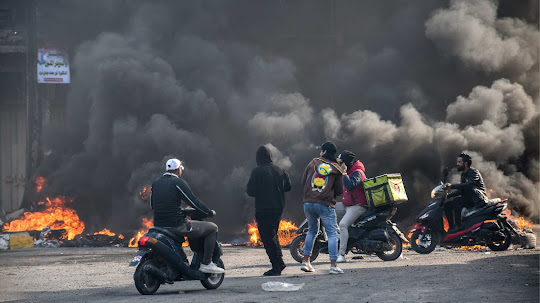 In an unexpected turn of events on January 10 an army unit arrived in Nasiriya, Dhi Qar to protect demonstrators from the police who were trying to force them out of Haboubi Square. The soldiers ended up shooting at the police killing one. Protests returned to the square on January 7 in response to a government arrest campaign against activists.

In December the government not only cleared out Haboubi Square which had been the site of a sit-in protest but started to detain activists. Al Aalem reported that a crisis cell created by Prime Minister Mustafa al-Kazemi after Sadrists attacked the square in November and killed 8 decided that the demonstrations in the city should be closed down. Then a series of raids and arrests began in an attempt to squash any desire by people to return to Haboubi.

On January 7 the latest activist Ihssan al-Hilali was picked up by the authorities leading people to return to Haboubi Square. The next day police used tear gas to break up the gathering in the square. People were back on January 9 and this time the police fired into the air to intimidate them but they got into Haboubi Square anyway and blocked the surrounding roads with burning tires. That culminated in the January 10 events when the police once again were using live fire to disperse the crowd who were throwing rocks at the police. An army unit then arrived and clashed with the police and shooting broke out between the two. The Dhi Qar police chief ordered his men to withdraw and to release the people they arrested that day. That led the crowd to begin chanting support for the army.

PM Kazemi came into office backing the protests. After the Sadrist attack in Nasiriya however his government worked to suppress that city’s activists. Resentment at a month’s worth of arrests along with two of their members being assassinated exploded into a new wave of demonstrations. What led to the army showing up and trying to stop the police clearing out Haboubi Square has not been explained yet but it shows at a minimum a lack of coordination between the security forces and more importantly perhaps divided loyalties. The police appeared to be under the authority of the provincial police chief while the army unit was reportedly from the Sumer Operations Command. Who gave the orders to the latter to intervene in Nasiriya will go a long way to explaining what happened and why.

Al Aalem, “Al-Haboubi … The army intervenes to save the demonstrators and clashes with the special missions regiment,” 1/10/21

Al Hurra, “The day after a campaign of arrests of Iraqi activists … protests and confrontations in Nasiriya,” 1/9/21

- “They fired bullets .. A great interaction with the Iraqi army video in Nasiriya” 1/10/21

Al Mada, “They decided to stand by the protesters The army kills and injures 43 members of the Special Forces in Nasiriya,” 1/10/21

Al Mirbad, “Nasiriya … security forces fire in the air from the direction of Civilizations Bridge in an attempt to disperse the demonstrators,” 1/10/21

- “Nasiriya … security reinforcements and chases coincide with a protest against the arrest of an activist,” 1/8/21

- “Protesters close Haboubi Square, following the arrest of one of the demonstrators,” 1/7/21

NINA, “A Demonstration In Nasiriya… And The Security Services Use Tear Gas To Disperse It,” 1/8/21

- “Statements By al-Haboubi Protesters: The Suspension Of Protests Is temporary, Provided The Arrests Stop,” 1/10/21