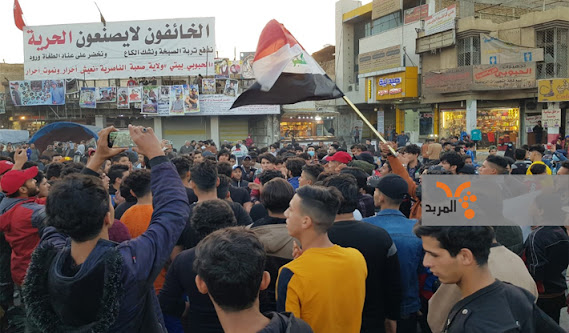 (Al Mirbad)
In the aftermath of the Sadrist attack upon the sit-in square in Nasiriya, Dhi Qar at the end of November the government has decided to go after activists rather than Sadr’s followers who killed eight people.

At the start of December the security forces began arresting activists while the press claimed a government committee wanted to close down the demonstrations in Dhi Qar. On December 1, Al Aalem reported that the crisis cell Prime Minister Mustafa al-Kazemi created to investigate the Sadrist assault was going to recommend that the sit-in square be closed and that Sadr’s militia the Peace Brigades be asked to withdraw from the province. That same day the authorities launched their first raids upon activists in Nasiriya with some being arrested. These would continue leading protesters to complain that the government was trying to put an end to the demonstrations and sparked new ones against the detentions. Nothing was done to any Sadrist.

PM Kazemi came into office being a supporter of the protest movement. He has not followed through with his promises however. No one has been brought to justice for killing protesters. He said payments would be given to the families of martyrs and those wounded but the government is broke at the moment due to the financial crisis. The security forces’ actions in Dhi Qar perhaps means the premier has changed his tune now that he is in power. Instead of being the protector he originally proclaimed he may now just want to put an end to the demonstrations for the trouble they cause him.

Al Aalem, “Activist: Al-Kazemi’s Committee is behind the arrest of protesters in Dhi Qar,” 12/7/20

- “Including the withdrawal of the Sadrists and the lifting of tents .. Sources reveal the recommendations of the Al-Kazemi Committee in Dhi Qar,” 12/1/20

Al Mada, “Nasiriya protesters are exposed to the second armed attack in two days and they seek help from the marjariya and the United Nations,” 11/29/20

- “Protesters in Dhi Qar: Activist Mustafa Abdul Zahra was arrested at his home in Nasiriya at dawn,” 12/11/20

- “Protesters: Security forces arrested the activist Sadoun Khalid at dawn after raiding his home in Nasiriya,” 12/8/20

Al Nasiriya, “In pictures: Al-Haboubi protesters are mourning a martyr who died today as a result of his injury during the Friday events,” 11/30/20