Protests In Iraq’s Kurdistan Over Economic Conditions And Mismanagement 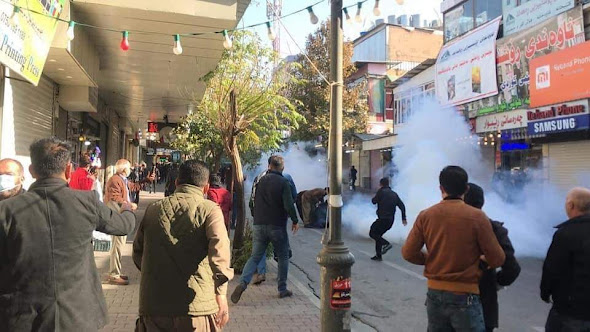 (NRT)
In December protests exploded in the Kurdistan region with a number of shootings leading to several fatalities and an attempt by the regional government to stifle media coverage of the events. The immediate cause were economic grievances especially the Kurdistan Regional Government (KRG) not paying the salaries of public workers, but discontent with the ruling parties was a larger issue. This was all a culmination of protests that started in the fall.

In August the first wave of demonstrations began in the KRG in Sulaymaniya. At their height there were protests in at least five different parts of the province. They started on August 12 in Sulaymaniya city with demands for the regional government to step down and then expanded to cover government salaries not being paid and deteriorating services. Those reached their height on August 22 when government offices were burned and stones were thrown at the local headquarters of the Patriotic Union of Kurdistan (PUK) and Kurdistan Democratic Party (KDP) in Sulaymaniya and Halabja. Demonstrations spread to Irbil the next day leading to 50 arrests and complaints by the Metro Center for Journalists’ Rights and Advocacy and the United Nations that the authorities were using violence against the activists. These highlighted that Kurdistan was in a financial crisis just like the rest of Iraq. That caused the government to not pay its workers for months leading to discontent. At the same time the ruling parties were blamed for their handling of the situation. These two factors would be the driving forces for demonstrations in the next four months.

In September the second wave of demonstrations started with the Teachers Union in Sulaymaniya leading many of them, which quickly spread to other public employees. PUK officials tried to blame the opposition New Generation party for the disturbances and brought a lawsuit against its president.

Finally the third wave began at the start of December again in Sulaymaniya over wages. This time the security forces responded with tear gas, rubber bullets and water cannons, while closing down the offices of the NRT network, restricting the Internet to try to stop organizing, banning protests and arresting journalists. Offices of all the major parties from the KDP and PUK to Gorran, the Kurdistan Islamic Group and Kurdistan Islamic Union were burned in Said Sadiq leading a KDP guard to shoot and kill one person on December 7 and government offices were burned in Piramagrun along with the Change headquarters in Chamchamal on December 9. Within the next two days seven more demonstrators were killed. Again, just like the original events in August the economic conditions started things off and then anger at the political parties took over.

The KRG’s economy has been a wreck for several years now. It made a number of bad economic decisions regarding its oil exports and ended up with a huge debt as a result. That was made worse by it not being able or willing to comply with various deals it made with Baghdad which resulted in its budget payments being cut off. The combination of not being able to take care of its workers along with its obvious mismanagement led to several years of protests with the most violent ones being this year.

Al Maalomah, “3 martyrs and wounded in renewed demonstrations in Sulaymaniya,” 12/9/20

- “After Sulaymaniya … the demonstrations are expanding and reaching Dohuk,” 12/9/20

- “The demonstrators burned the building of the Maqamah of Sayid Sadiq district in Sulaymaniya,” 12/8/20

- “In pictures, the headquarters of the Kurdistan Democratic Party and the Traffic Department in Khormal district, Halabja, were burned,” 12/8/20

- “A new protester was killed during shooting in Arbat district, Sulaymaniya Governorate,” 12/9/20

- “Sulaymaniya demonstrations … The number of victims increased in Sayid Sadiq district to 7 martyrs,” 12/8/20

NINA, “Demonstrators In Sulaymaniyah Demand The Dismissal Of The Regional Government,” 8/12/20

- “Party And Govt HQs Burned In A Number Of Sulaymaniyah Districts In Protest Against Poor Living Conditions,” 8/23/20

- “Demonstrations Continue In Parts Of Sulaimani Governorate Despite Ban On ‘Unauthorized’ Protests,” 12/10/20

- “Despite Curfew, Protests Continue In Parts of Sulaimani, Halabja Governorates,” 12/9/20

- “Many Protesters Arrested Including Teachers By Security Forces In Sulaimani [Videos],” 12/3/20

- “’Peaceful Demonstrations Are Being Dealt With Violence’ In Kurdistan Region: Local Watchdog,” 8/23/20