Review The Man Who Pushed America To War, The Extraordinary Life, Adventures, and Obsessions of Ahmad Chalabi 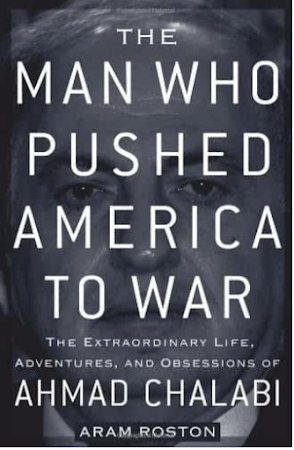 To people who know about the 2003 invasion of Iraq Ahmad Chalabi is a polarizing figure. Is he a hero or a villain? Is he a con man or a visionary? The Man Who Pushed America To War, The Extraordinary Life, Adventure, and Obsessions of Ahmad Chalabi by Aram Roston attempts to answer those questions. The book goes through the major points in Chalabi’s life from his time growing up under the Iraqi monarchy to his exile after the 1958 coup to his family’s financial problems to joining the opposition to Saddam Hussein. The author believes that Chalabi helped convince the U.S. to go to war with Iraq but that was only because Americans wanted to hear what he said.

Roston argues that Chalabi’s early years shaped his life. He grew up in a very wealthy family in Baghdad who were financiers of the monarchy. When the king was overthrown and executed in the 1958 coup the Chalabis fled the country. Chalabi went into academics getting a PhD in math in the United States and then shortly was a professor of mathematics in Lebanon. He ended up joining the family business and set up the Petra Bank in Jordan which became one of the largest and most notorious in the country. The government eventually shut down the bank in a scandal and Chalabi was forced to flee a second time. These events were important for a number of reasons. As the author points out Chalabi would romanticize the monarchy period as the golden years of Iraq. He had a life of luxury with his family being part of the elite. He had no idea about the huge poverty, social dislocation and other problems in the country living in his family’s villas. The scandal that surrounded his Petra Bank also started a trend for Chalabi to blame his political enemies for anything that went wrong. As the author notes, the entire Chalabi family network went up in flames in 1989-1990 with its businesses in Switzerland and Lebanon along with Petra all being involved in embezzlement, false accounting, bad investments, and more. Chalabi however claimed the Jordanians were working with Saddam Hussein to take him down. This showed that he wouldn’t take responsibility for his personal failings and would instead point the finger at plots against him.

The next important section of the book covers Chalabi’s involvement in Iraqi opposition politics. Right from the start Chalabi pushed two agendas. On the one hand he talked about Iraqi exiles being able to overthrow Saddam and creating a democracy. On the other he pushed a plan to seize parts of Iraq which he claimed would lead to a military revolt and then taking control of the country. The unspoken part of that ideas was that it would only work if the United States military intervened. That after all was Chalabi’s goal from the start, to get America to get rid of Saddam and put him in power. The book goes into a lot of details about Chalabi’s up and down career to achieve this goal. One problem he had was that he had no following in Iraq. Another was that he would often wear out his welcome with one American agency and have to find another patron in Washington D.C. because he came to rely upon the U.S. to fund his activities. When he lost the backing of a U.S. group he would also attack it for plotting against him like what happened with his Petra Bank. Where Chalabi excelled was winning followers within the media and neoconservative and conservative circles in the U.S. He was very convincing and won over many people to his cause. His ties to journalists would allow him to get prominent opinion pieces in leading papers like the Washington Post and Wall Street Journal and to spread his propaganda campaign in the 2000s that Iraq was behind 9/11 and had weapons of mass destruction. This also brings up Chalabi’s divisive image. Did he con people or did he have a real vision? Roston believes that Chalabi was pushing ideas that some Americans like the neoconservatives and members of the press already wanted to hear. The Iraqi defectors his Iraqi National Congress (INC) came up with after 9/11 for instance were eaten up by the media because those were the types of stories they were looking for.

The last part of The Man Who Pushed America To War is about Chalabi’s return to Iraq after the 2003 invasion. Chalabi portrayed himself as a Western liberal who would transform Iraq, but when he became a member of the Iraqi Governing Council and later the transitional government he proved to be a typical Iraqi politician turning to sectarian politics and putting his relatives into positions of power. Chalabi for instance put together the Shiite House of Shiite members of the Governing Council, later joined the United Iraqi Alliance for the 2005 elections that was created to ensure Shiite rule in the first elected government, and then aligned with Moqtada al-Sadr whose militia fought the Americans and then moved to cleanse Baghdad of Sunnis during the civil war. He also helped get his nephew Hussein al-Uzri appointed the head of the Trade Bank of Iraq even though he had no experience in banking. Afterword Uzri signed a deal with a company Chalabi founded and had part ownership of and Uzri used to work for to set up ATMs and Visa cards. The INC’s intelligence office was also raided by the police in 2004 for kidnapping and robbery. Again, Chalabi went back to his old game of claiming this was a political plot against him. The book makes a convincing argument that rather than being a force for change in the new Iraq Chalabi proved to be just like the rest of the new elite turning towards sectarianism to take power and then using nepotism to enrich himself and his family.

The Man Who Pushed America To War is a very well researched and easy read on Chalabi’s life that goes through all the controversies that surrounded him and tried to find out what really happened. Few people for instance broke down the case against Chalabi’s Petra Bank, but Roston looked through press reports and the court papers to show that it was just one part of the collapse of the Chalabi family’s financial empire that all went down at the same time for mismanagement and corruption. The book also makes a good case that if Americans and the media weren’t already looking for stories about the evils of Saddam Hussein Chalabi would have never gotten the standing that he gained. No amount of charm could get newspapers to use his defector stories over and over and over again if it wasn’t a popular topic at the time. That leads to the most important part of the book that detailed how Chalabi helped pave the way for the 2003 invasion of Iraq. Through pure perseverance Chalabi spent over a decade lobbying the Americans for the overthrow of Saddam and finally succeeded. Most books that deal with Chalabi claim he misled the U.S. into war. Roston covered both his good and bad sides.