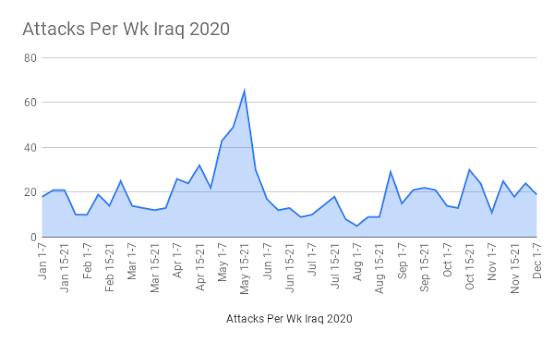 For the last month security incidents have been going up and down but have hovered around 20 incidents per week. The start of December was no different with 19 attacks.

4 people were killed made up of one civilian, one Hashd al-Shaabi, and two Iraqi Security Forces (ISF) members. Another 30 were wounded consisting of one civilian, 10 Hashd and 19 ISF. As usual the security forces were the majority of casualties 32 of 34. Since the spring the Islamic State has been carrying out a war of attrition against the government’s forces.

8 electricity towers were blown up in Qaim and in between Ana and Haditha in western Anbar during the first week of December. Last month IS moved away from its usual low level attacks in the province and that has continued into December.

Snipers killed one civilians and wounded four in Baghdad during the week. These two incidents took place in Tarmiya and Shula, both in the northern section of the province. These are the types of incidents the insurgents are now carrying out in the capital governorate. They are low level shootings and IEDs in the outer towns especially in the north and south.

The number of attacks in Diyala went from 6 the last full week of November to 12 at start of December. This two IEDs on the security forces, two gun battles with the security forces, two attacks upon checkpoints, three foiled infiltration attempts, and three villages that were assaulted. Three of these incidents took place in the north along the Salahaddin border, four were in Muqdadiya in the center and five were in the Khanaqin district in the northeast. The Hashd command in the province constantly claim they have wiped out the vast majority of IS cells in Diyala and that it is building defense networks around villages in Muqdadiya and Khanaqin but there has been no change in security incidents in the province.

Kirkuk, Ninewa and Salahaddin only had one incident each. In Kirkuk when a checkpoint was shot at in the Rashad district in the south. That left one policeman dead and two wounded. Almost all the violence in Kirkuk takes place in the south where the insurgents were never defeated during the war. Ninewa saw an IED go off against two soldiers in the northwest. Finally, a checkpoint was attacked along the Salahaddin-Diyala border in the southeast that left two soldiers wounded.

Iraq Newspaper, "Members of the Baqi Brigade were killed and 21 wounded in Muqdadiya, Diyala after attack and ISIS terrorist takes responsibility," 12/4/20

Al Maalomah, "7 members of the Ministry of Defense crowd were killed and wounded in a terrorist attack in Diyala," 12/3/20

- "An officer and two soldiers from the army were wounded by an explosive device in Diyala," 12/5/20

- "The popular mobilization of the Ministry of Defense thwarted an attack in Nawfal, Diyala," 12/6/20

- "The Popular Mobilization Forces thwarted ISIS infiltration in the Al-Safra Basin in Diyala," 12/3/20

- "The Popular Mobilization Forces: We thwarted ISIS attacks that affected 3 villages in Diyala," 12/4/20

NINA, "An officer was killed and two soldiers were wounded in an ISIS attack northeast of Baqubah," 12/5/20

- "PMF Thwart An Attack By ISIS Terrorists On One Of Its Points Near Hamrin Hills," 12/4/20

- "A policeman was killed and two others wounded in an ISIS attack south of Kirkuk," 12/7/20

- "The Popular Mobilization Forces thwarted an ISIS attack on the outskirts of Khanaqin, in Diyala," 12/4/20

- "Two officers and a policeman were wounded by an explosive device northeast of Baqubah," 12/3/20

Shafaaq News, "A complete blackout in the city of Anbar due to terrorist attacks," 12/7/20

- "Two Iraqi soldiers were wounded in an attack by ISIS between two governorates," 12/2/20

Al Sumaria, "One person was killed and another wounded in an armed attack in Baghdad," 12/3/20