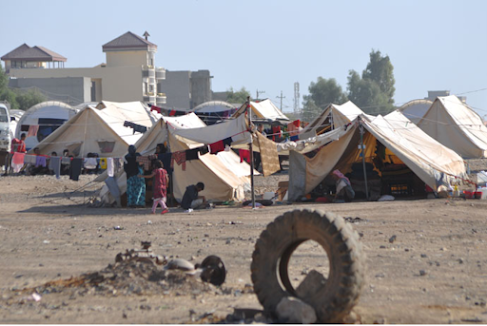 (IFRC)
In October 2020 Prime Minister Mustafa al-Kazemi formed a committee to close down 17 displaced camps in Iraq that held 60,337 people by December. Since then, eleven camps have been shuttered and two have been declared informal forcing out 27,191 displaced (IDPs). This includes all the camps in Kirkuk and Diyala. This is despite continued warnings that many of these people will face major difficulties. This is another case of government negligence because it is showing no signs it wants to help the displaced, just gain political points.

The problems with Kazemi’s policy all start at the top. First of all the government said that it would be providing a stipend to all the IDPs who are forced out of camps. Baghdad is facing a huge budget deficit due to the drop in oil prices. It can’t pay its own public workers let alone IDPS. Second, Human Rights Watch and Amnesty International have both warned that many of the displaced cannot go home due to the threat of reprisals. As the governor of Ninewa recently noted some IDPs cannot return because many tribal leaders have banned Islamic State families. There are other issues as well facing IDPs such as leftover bombs, lack of government papers, few services, no jobs and insecurity. The International Organization for Migration the premier group assisting IDPs assessed 2,055 return locations in Iraq have severe conditions as a result. These cover almost every postwar area in Iraq from Sinjar in west Ninewa to Qaim and Hit in western Anbar to Baiji in Salahaddin to Muqdadiya in central Diyala. As a result the United Nations reported roughly 1/3 of the people who have left camps since they’ve been closing have not returned. The government has no strategy to help people going back to their original areas. This should be no surprise as Kazemi is looking for a political victory in this matter rather than hoping to help the displaced. He wants to claim he solved the IDP issue one of the lasting legacies of the war against the Islamic State before next year’s election.

The Displacement Ministry at the end of November admitted to the short sightedness of the government. It started an emergency housing plan for IDPs that can’t go home. Baghdad has thus gone from paying for the displaced in camps to renting them apartments because of its own ineptitude.

Al Mada, “Tribal leaders renew their refusal to receive ISIS families with the camps file close to being closed,” 12/5/20

Mahmoud, Sinan, “UN ‘gravely’ concerned for safety of IDPs forced from camps in Iraq,” The National, 12/1/20