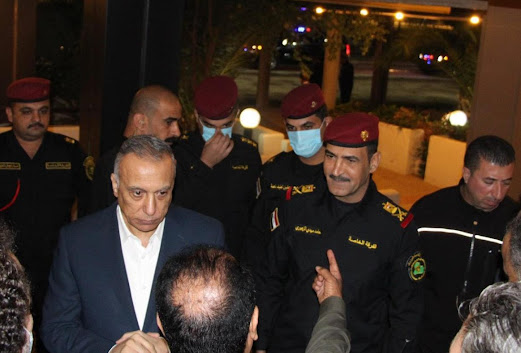 Iraq’s Prime Minister Mustafa Kazemi has taken a second stand against the pro-Iran Hashd factions. This time he has the backing of not only the United States but Iran, which may turn his fortunes and that of his government if he plays his cards right.

Things began on December 20 with the latest attack upon Baghdad’s Green Zone. Afterward the Interior Ministry arrested Asaib Ahl Al-Haq (AAH) commander Hissam al-Azirjawi and three other members. The police claimed Azirjawi was also responsible for a September incident when missiles aimed at the Green Zone fell short and killed and wounded 7 people. He is the commander of AAH’s missile unit. The arrests show that while new splinter groups often take credit for these incidents the main pro-Iran factions are largely responsible for them.

This led to a Christmas day confrontation between AAH and the government. Asaib Ahl al-Haq posted videos of armed men and then some of its units hit the streets of Baghdad saying that it was waiting for its leader Qais al-Khazali to say the word and they would liberate their brothers. PM Kazemi responded by deploying members of the Counter Terror Service to the capital, putting the Federal Police on alert, and then taking a photo op with his forces. The premier Tweeted he would stand up to the “outlaws” that were threatening his administration.

There were contradictory stories about how things were de-escalated. First it was reported that National Security Adviser Qasim al-Araji who is from the Badr Organization held talks with AAH and got it to withdraw its forces. Then an alleged government document was posted on social media that Azirjawi was released to the Hashd Commission, which would mean he would be set free without ever going to court. Later in the day the Interior Ministry and Kazemi’s military spokesman both denied that story and said that the AAH commander was still in custody. There was another report that he would be released in 48 hours though. Whatever the case the negotiations worked and the two sides backed down.

The PM could finally be standing firm against these pro-Iran groups that have constantly defied him and made him look weak by attacking Americans and killing and wounding Iraqis in the process. In June, the Counter Terror Service (CTS) raided Kataib Hezbollah’s (KH) headquarters in Baghdad and arrested several members for rocket attacks. Kataib Hezbollah and Harakat Hezbollah al-Nujaba responded by forming a convoy and driving to the CTS headquarters in the Green Zone to protest. That led the KH members to be released to the Hashd Commission who were then released. The premier came away looking weak and feckless while the pro-Iran Hashd celebrated their victory. This time it appears that the premier has stood his ground. The difference is that he has the backing of the two main foreign powers in Iraq. The Trump administration has consistently been pressuring him to reign in the pro-Iran groups for their assaults upon U.S. targets. Iran on the other hand is afraid that Trump will launch a strike upon it before he leaves office using those attacks as an excuse. In November and December the head of the Iranian Revolutionary Guards Quds Force commander General Ismail Qaani was in Baghdad to tell the Hashd factions to stop targeting the U.S. That has provided Kazemi with the support he needs to finally oppose these groups which are routinely thumbing their noses at him.

Things are still a bit up in the air. On December 26 Qais Khazali said that tensions with the government had been resolved, while also saying that the pro-Iran factions have the right to attack the Americans. Kataib Hezbollah on the other hand continued to threaten Kazemi on social media saying it would cut off his ears. The responses show that these resistance factions are all loosely connected together but that they don’t have the strong leadership they used to under Abu Muhandis otherwise they would have all had the same messaging. In fact, the continued assaults on U.S. targets against Iranian wishes highlights that they aren’t even listening to their sponsor at this moment because they want to mark the anniversary of the deaths of Iranian Quds Force commander General Qasim Soleimani and Muhandis’ which ocurred in January.

If PM Kazemi stands his ground this would be an important victory for his administration. It will not end the overall problem however. Pro-Iran groups continue with their attacks upon Americans. If more of their members get arrested it may not end peacefully as Christmas’ events did. The statements by Kataib Hezbollah have to be taken seriously. As long as Washington and Tehran stand behind the prime minister however he should be able to withstand their threats and could even turn it against them. Who is playing chess and who is playing checkers could decide how this all works out in the end.

Alaca, Mehmet, “Kataib Hezbollah: The time is appropriate to ‘cut off his (Kadhimi) ears like goats’. That time neither Iran’s Itla’at [MOIS} nor the CIA and hypocrites will protect him.” Twitter, 12/26/20

Badawi, Tamer, “2nd senior figure in AAH, Jawad Talibawi: “Any second attempt to offend the PMF & resistance factions is definitely a US attempt & it will fail similar to the first attempt, but we will empower the voice of reason & wisdom as long as that is possible, otherwise we are up for it.” Twitter, 12/25/20

- “Another de-escalating AAH statement from Mahmoud Rabi’ee, the Spox. of AAH’s political wing, Sadiqon. He denies that AAH made a parade in Baghdad and that fake news aim to ignite a crisis,” Twitter, 12/25/20

- “Hence, we call on the treacherous Kadhimi not to test the resistance’s patience after today. The time is appropriate to ‘cut off his ears’ like goats’. That time neither Iran’s Ita’at [MOIS] nor the CIA and hypocrites will protect him.” Twitter, 12/26/20

- “KH: “The region is boiling and the chance of a full-blown war is there. This requires self-discipline to deny the enemy the chance so that we would not be the ones starting it. The rockets fired lately do not benefit anyone but Trump and this should not be repeated (…),” Twitter, 12/26/20

- “Our alliance with brothers in domestic and external resistance factions is strong. What affects them, affects us. We are committed to protecting them per certain frameworks between us (…),” Twitter, 12/26/20

Habib, Mustafa, “And now, militias Asaib Ahl al-Haqissued a video of its members in Baghdad,” Twitter, 12/25/20

- “Critical times in #Iraq.. Iraqi intelligence document, issued today, says that Asaib Ahl al-Haq intends to attack the headquarters of the Intelligence Agency in #Baghdad, to release one of its members who was arrested two days ago for involvement in bombing of the #Green_Zone,” Twitter, 12/25/20

- “New Iraqi intelligence document issued today, says that security forces release a militia member in Asaib Ahl al-Haq who was involved in bombing U.S. embassy in Baghdad, and was handed over to the Al-Hashd Al-Shaabi. #Iraq,” Twitter, 12/26/20

Kohnavard, Nafiseh, “Apparently Iran-backed Badr & Kataib Hezbollah are negotiating with Asaib Ahl AlHaq to calm the situation down. Asaib has always been known as the naughtiest & the most uncontrollable group among the groups linked to Iran. But this also can be a sign of serious internal conflict.” Twitter, 12/25/20

- “#Iraq Various weird videos circulating on Telegram that allegedly show the members of Iran-backed Asaib Ahl AlHaq threatening the US and Iraqi PM Kadhimi Can’t confirm the video but it was shared on IRGC-linked Telegram channel,” 12/25/20

Al Mada, “A confusing night lived in Baghdad … Al-Kazemi breaks the rule of fraud, and the leader of Asaib Ahl Al-Haq is accused of killing and wounding 7 people,” 12/26/20

Malik, Hamdi, “Asbah al-Kahf warns the gov “not to play with fire”. They say they are awaiting orders from Qais al-Khazali to take the streets. “We are ready to use our rocket capabilities to defend Asa’ib Ahl al-Haq”. Their use of language is very interesting, as if Khazali is their leader.” Twitter, 12/25/20

- “He continued: “AAH agreed to the initiative put forward by national security advisor @qassimalaraji to resolve crisis provided that detainee is released within 48 hours. Kadhimi refused to release detainee before full investigation and only by a judge’s decision”.” Twitter, 12/25/20

- “A high-ranking official in the Iraqi government just told me that the militias’ mobilization tonight was to force PM @MAKadhimi to free an AAH member who was arrested Sunday night on suspicion on firing rockets on @USEmbBaghdad,” Twitter, 12/25/20

- “The high-ranking official said: “after PM @MAKadhimi’s tweet emphasizing that his government is ready for confrontation and after ISF deployed forces to the streets of Baghdad, the muqawama militias withdrew from the streets”.” Twitter, 12/25/20

- “The KH fighter’s scenario is repeated again. The AHH member accused of firing rockets at U.S. embassy in Baghdad has been handed over to the Hashd security directorate, controlled by KH. Sources in Iraqi government confirmed the below letter is genuine,” Twitter, 12/26/20

Al Maalomah, “Khazali: We affirm the right of the resistance to end the presence of American forces,” 12/26/20

Al Masalah, “The Commander in Chief spokesman: The accused of targeting Al-Khadra is still in the hands of the security forces,” 12/26/20

Shafaaq News, “The Iraqi authorities deny handing over the leader of Asa’ib Ahl Al-Haq to the Hashd security,” 12/26/20

- "Security media; An Iraqi soldier was wounded by the bombing of Al-Khadr and rockets fell on apartments," 12/20/20

Tom Cat, “The detainee in question is Hossam Al-Azirjawi from Sector 75 in Sadr City, who Asaib is demanding to be released,” Twitter, 12/25/20

- “Now Security Forces spreading from Palestine Street to Muthanna Bridge in Baghdad. Reports that the state of alert in Baghdad is now at Maximum,” Twitter, 12/25/20

- “Prime Minister ordered the formation of a joint task force comprised of Iraq Counter Terrorism Service and Federal Intelligence and Investigation Agency (Iraq equivalent of FBI) to impose the law in Baghdad and arrest any illegal armed groups present in the city,” Twitter, 12/25/20