Review Iraq and Imperialism, Thomas Lyell’s The Ins and Outs of Mesopotamia 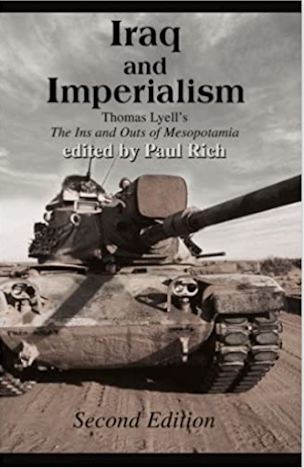 Thomas Lyell was a British officer who served in Iraq during the British Mandate. He was a judge in a criminal and then a land claims court. His The Ins and Outs of Mesopotamia was published in 1923. The first two thirds of the book are about his mostly disparaging remarks about Shiism and Iraqis which was largely influenced by his seeing the underside of society as part of the judiciary. The ending is about what England should do with Iraq. Lyell was an imperialist and a racist that led to his conclusion that the British should stay in Iraq, develop and administer it so that it could be a profitable part of the empire because the population was incapable of self-rule.

The vast majority of the book is Lyell explaining his thoughts on Islam and the Shiites of Iraq. On the positive side he believed that Muharram and Ramadan showed a level of devotion and religiosity that was sorely missing in Western Europe and England at the time. The telling of the story of Hussein and the Battle of Karbala for instance by Shiites touched Lyell for the emotions it invoked in them. On the other hand he complained about the clerics again and again. The leading ones had multiple wives and concubines, often times young women who were given to them by families hoping to gain favor. He recounted how one cleric used the donations he received to buy a huge tract of land and set up a business for his family leading Lyell to claim that Muslims were intent upon exploiting their fellow religionists. He condemned the temporary marriages that clerics gave which allowed men to sleep with women and then leave them as exploitative. Overall, he saw the clergy as corrupt and self-serving, and therefore thought Iraqis who were majority Shiites were unfit for self-rule under the leadership of this kind of religious establishment. Lyell also felt Christendom and Islam were competing for power which flavored his racist and contradictory view of the religion. He was impressed with the faith of Shiites in Iraq, condemned them for abusing their religion, and then said Islam was spreading through Africa and posing a threat to Christianity that was also proselytizing there. Somehow they are not really religious, but very religious and appealing to more people all at the same time. His general stance was that Muslims were inferior people. The fact that most of his examples came from court cases showed where he got his negative ideas from.

Having spent most of The Ins and Outs of Mesopotamia disparaging Iraqis he finished with why the British should maintain control of the country. He begins with the scenario he didn’t believe in which was withdrawing. He argued that would lead to the Wahabis of Arabia invading from the south and attempting to destroy the Shiite shrines because they condemned the sect and the Soviets with the help of Mulla Mustafa Barzani and the Kurds moving in from the north. He also noted that the British had already heavily invested in Iraq and to walk away would be a net lost. Finally, Lyell attacked King Faisal for having no standing in the country and his ministers being unqualified because he thought establishing the monarchy was a waste. Instead he believed the English should stay, administer and develop the country so that it could make a profit for the empire. This should be done by direct rule which was the approach of his hero the former High Commissioner of Iraq Sir Arnold Wilson and was the way England ran India. Interestingly he argued for creating a middle class in Iraq out of peasants and lower sheikhs and breaking up the land into small holdings. He acknowledged this would take decades and of course could only be done by the British. Lyell was a committed imperialist and thought the British empire was the greatest in the world. Since it took Iraq it should keep it and make money off of it as a result because that’s what he thought the purpose of empire was.

The British had two different views about how to rule Iraq. Initially it was the India Office and people like Lyell that prevailed. They wanted Iraq to be run like India with a British administration because as the book lays out the author did not think Iraqis were civilized and capable of running their own affairs. The clerics would tell them what to do and Lyell believed they were only interested in enriching themselves and were against change. When the Iraqis rose up against the British in the 1920 Revolt those ideas were dropped and London moved to indirect rule putting Faisal on the throne but with the English in charge of administration. Lyell thought that was ridiculous because it was not how the empire should be run. Overall, the book is a very mixed bag. It goes on and on and on about how bad Shiites are. It gets tiresome to read after a while. At the same time Lyell represents a common view amongst the British officers that came to run Iraq. It’s not a necessary read but it does provide some background to the British Mandate.