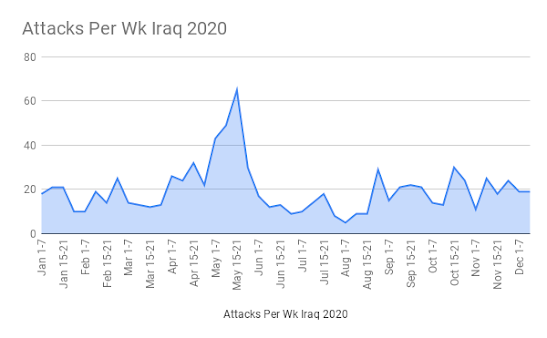 Security in Iraq was basically unchanged between the first and second weeks of December. The main difference was that pro-Iran groups carried out two attacks for the first time in a month.

There were a total of 21 incidents in Iraq reported in the media. Two of those were by forces aligned with Iran leaving 19 by the Islamic State. The week before there were 19 attacks by the insurgents.

Those left 13 killed made up of 3 Hashd al-Shaabi, 4 civilians and 6 members of the Iraqi Security Forces (ISF) and 26 wounded consisting of 1 Hashd, 12 civilians and 13 ISF. Ninewa had the most casualties with 15, followed by 8 in Diyala, 7 in Anbar, 4 in Kirkuk, 3 in Irbil, and one each in Babil and Salahaddin. 23 of the 39 dead and wounded were members of the security forces. Since the spring the Islamic State has been carrying out a war of attrition against the government.

The first attack by pro-Iran groups occurred on December 10 in Muthanna when a convoy carrying supplies for the U.S. was hit by an IED. Two days later the Baghdad International Airport received mortar fire. In November there was one incident by these groups and before that there were seven in October before a truce was announced. A new group declared that the ceasefire was over after the Muthanna incident. It’s yet to be seen whether this is just one or two groups breaking away from the rest or whether there will be a new wave of attacks.

For the second week in a row the militants went after infrastructure in Anbar. At the start of December 8 electricity towers were blown up in two incidents. On December 13 three more were taken down, this time using vehicles instead of explosives in the Qaim district in the west along the Syrian border. A checkpoint was also attacked in Hit leaving three soldiers dead and four wounded. The insurgents have definitely changed their tactics in the province recently. Before it was mostly used to move in men and material from Syria. What violence did occur were usually small shootings and IEDs. Now the incidents are much more serious.

A checkpoint in the Jurf al-Sakhr district of northeast Babil was hit by an IED in Babil. This is the area most likely to be attacked in the governorate because it is a large base for Kataib Hezbollah and therefore provides plenty of targets.

Incidents in Diyala dropped by more than half from the previous week. There were 12 incidents the start of December versus 5 the 2nd week of the month. 3 Hashd died from an earlier incident on December 3. Two towns were hit by mortar fire plus there was a shooting and an IED. One of these incidents was in Khanaqin in the northeast and two were in Muqdadiya in the center. These are the most violent parts of the governorate. Two more however occurred in Buhriz in the southwest. This was a change as nothing has happened there since the end of October. Previously IS was hitting the northwest by the Salahaddin border. It appears that IS is looking for new areas to expand to.

A rare suicide bombing happened in Irbil’s Makhmour district in the south. It targeted a passing army convoy. IS has been exploiting this disputed area since the start of the year, but this was one of the biggest incidents so far. The last suicide bombing was during the second week of September.

Kirkuk had four incidents topped off by the Khabbaz oil field having two wells blown up. The other major incident was when the army was searching tunnels in the Dibs area in the north and an IED went off which killed one soldier and wounded two more, one of which was a regimental commander. Almost all the attacks in Kirkuk are in the south, but this incident points to the insurgents having bases across the province.

The five incidents in Ninewa were all low level with one shooting and the rest being IEDs. IS has slowly picked up its operations in the province but they remain these types of attacks.

An IED went off in Alam in the Tikrit district in Salahaddin during the week.

Al Alam, "A convoy of the American coalition forces targeted by an explosion southern Iraq," 12/10/20

- "A farmer was injured when an explosive device exploded in a village in Diyala," 12/10/20

- "Gunmen assassinate a young man who was riding his motorcycle east of Mosul," 12/9/20

- "An officer was killed and a regiment Commander and a soldier were wounded in a bomb explosion northwest of Kirkuk," 12/12/20

- "A Security Source: Baghdad Airport Explosion Caused By A Mortar Shell … No Human Or Material Casualties,' 12/12/20

- "Three fighters were killed in a terrorist attack in Diyala this week," 12/8/20

- "Two members of the Ministry of Defense were wounded in a terrorist attack northeast of Baqubah," 12/14/20

- “A Shiite faction claims it targeted international coalition supplies in Iraq: The truce has ended,” 12/10/20