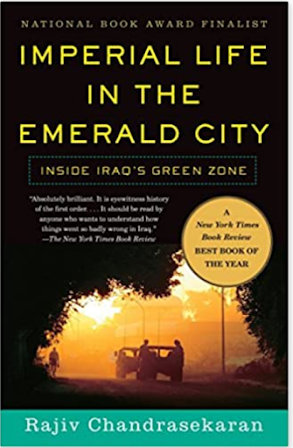 Imperial Life In The Emerald City, Inside Iraq’s Green Zone by Washington Post journalist Rajiv Chandrasekaran is a critique of the American effort to rebuild Iraq under the Office of Reconstruction and Humanitarian Assistance (ORHA) and the Coalition Provisional Authority (CPA) in the first year of the American occupation. The U.S. wanted to create a democracy and free market in Iraq that would be a model for the rest of the Middle East but its dreams crashed on the rocks of reality. It’s ideas were too big, its resources too little, and its planning poor and often times haphazard.

Chandrasekaran’s style for most of the book is to introduce an American official, what they planned and how it worked out. One was John Agresto who came from a small university in New Mexico St. John’s College. He had connections to the White House and was assigned to be the head of the Higher Education Ministry. When he first arrived he planned to set up liberal arts college based upon the American model and enshrine academic freedom. When he looked at Iraq’s universities however he quickly realized that the main priorities were rebuilding and basic equipment because so many had been looted and burned. $25 million was assigned to his ministry but that money ended up going to American universities that set up many joint programs with Iraqi ones. Agresto thought that was a waste. He then asked for $37 million from the CPA but was rejected by its head Paul Bremer. When $8 million was finally authorized for his ministry the United States Agency for International Development was given control of it and Agresto had to fight to get his hands on it. When he did USAID subtracted $500,000 in administrative costs. He used the remaining money to order lab equipment for every Iraqi university but it never went through. He did get academic freedom rules passed but they were never enforced because the Iraqi institutions had no way of enforcing them especially because the biggest threats to the schools came from Shiite religious parties with militias. Then when the Iraqis were given control of Higher Education the Iraqi Islamic Party appointed a minister who fired every university president so that they could be replaced by party loyalists. Agresto came away from his time in Iraq deeply disappointed and feeling like he’d failed. He was one of the rare self-reflective Americans the author mentioned because many stayed in Iraq for so short a period that they really had little connection to Iraq or what they did there. These are the types of stories that draw you into the book and Chandrasekaran has around a dozen of them.

Imperial Life In The Emerald City’s thesis is that Agresto’s experience was the norm not the exception when the U.S. tried to build Iraq. Americans came into the country with ambitious dreams believing that they could re-make it in America’s image. That went from selling off state owned companies in a drive to lessen the state’s role in the economy to coming up with new traffic rules to boosting electricity output to demobilizing militias. Chandrasekaran points out some of these were desperately needed such as restoring services, others never went anywhere like privatization which lawyers said was illegal for an occupying power to carry out, a few were just a waste of time, while some like the militia issue never had a chance because they were implemented in the last days of the CPA. All of these issues were magnified when in November 2003 Bremer announced that the CPA would be ending by June 2004 because the White House wanted out of running Iraq short circuiting their own policy. The author presents official after official that was never able to follow through with their plans to prove his point. The irony is that some of these reforms would have helped Iraq in the long term such as getting the government out of the economy because it was highly inefficient, corrupt and used as patronage networks by the new ruling parties. The CPA didn’t move ahead with them for a variety of reasons ranging from fearing Iraqi protests, to not having the money, the authority, and many times unrealistic plans for how to achieve them.

The general impression the book gives is that the ORHA and CPA were a mess. The main causes were that the Bush administration went into Iraq with no real plan for the postwar situation, and then never provided enough money or personnel. On top of that it ended both the ORHA and CPA earlier than expected because of domestic political concerns which made it impossible to carry out most of their plans. Chandrasekaran was one of the first to point out the major shortcomings of the early occupation of Iraq and his thesis has been proven by subsequent books. It’s still a very quick and easy read full of interesting stories.