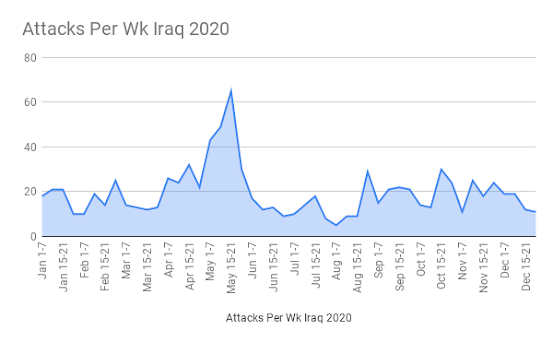 For the last month Islamic State attacks have gone down in Iraq. At the same time, pro-Iran groups have picked up their operations against the Americans as the anniversary of the deaths of Hashd al-Shaabi leader Abu Muhandis and the head of the Iranian Revolutionary Guards Quds Force Commander General Qasim Soleimani nears in January.

There were 17 security incidents reported in the media from December 22-28 in Iraq. 6 of those were by pro-Iran groups leaving 11 by IS.

In October allies of Iran announced a ceasefire in targeting the U.S. in Iraq. That is now over. Starting the second week of December there were two attacks by these groups, then two more the third week, and now 6 the fourth. These were all IEDs against convoys carrying supplies to the Americans. Two were in Babil, two in Diwaniya, one in Dhi Qar and one in Muthanna. These will likely continue into at least January if not beyond as the pro-Iran factions want the U.S. out of Iraq.

On the other hand IS appears to be winding down for the winter. There were 24 attacks from November 22-28, then 19 the first and second weeks of December each, followed by 12 from December 15-21, and finally 11 the fourth week of the month. This appears to be just the ebb and flow of violence in the country.

There were 3 deaths and 22 wounded the fourth week of December. 1 Iraqi Security Forces (ISF) member and 2 civilians were killed while 1 Hashd al-Shaabi, 4 civilians and 17 ISF were injured. Diyala had the most casualties with 15.

Besides the two bombs by pro-Iran groups the Islamic State also tried to infiltrate into the Jurf al-Sakhr district in northeast Babil. This is a large Kataib Hezbollah base which the insurgents routinely attempt to attack.

In Baghdad there was a shooting in Tarmiya in the outer north that resulted in two soldiers being wounded. The few incidents in the province usually happen in towns like this in the north and south.

There were four incidents in Diyala. There were two shootings and two bombings. One of those hit a police convoy and resulted in nine injuries. Two of these were in the Muqdadiya district in the center, one was in Kanaan in the south, and one outside Baquba in the southwest. Diyala is the center of IS activity in Iraq and it has established de facto control of many of the rural parts in the center and northeast. It is using these areas to establish camps, rebuild its cadres, protect its leadership, extort money, collect taxes and plan for the future.

Kirkuk and Ninewa only had one incident each. Both were IEDs with the one in Kirkuk killing a regimental commander in the army.

Finally there were two infiltration attempts and a bombing in Salahadddin.

Iraq Newspaper, "In pictures, the terrorist ISIS detonates the vehicle of the 9th Brigade of the Badr Corps of the Popular Mobilization Forces in Metibji," 12/22/20

- "ISIS terrorists kill the commander of the 1st regiment of the 51st brigade within the 8th division of the Iraqi army, and four of his bodyguards," 12/27/20

NINA, "A civilian was killed and another one wounded in a terrorist attack northeast of Baqubah," 12/26/20

- "A New Convoy Of Logistical Support For The Int'l Coalition Forces Targeted In Dhi Qar," 12/25/20

- "The Popular Mobilization Forces foils an infiltration attempt by ISIS on Jurf Al-Nasr," 12/24/20

- "Targeting a convoy of logistical support to the international coalition forces in Samawah," 12/25/20

NINA, "An IED Targets A Convoy For Logistical Support, Belonging To The Int'l Coalition," 12/28/20

- "One Wounded After Bomb Hits Contractor Vehicle In Diwaniya Governorate," 12/25/20