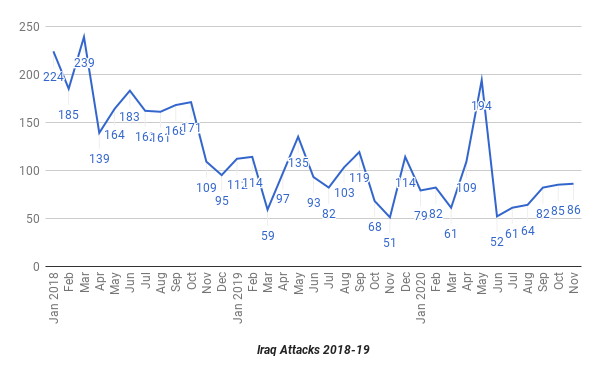 During the spring of 2020 the Islamic State launched a large campaign in Iraq with attacks spiking to the highest level since 2018. There was an immediate dip after that with some of the fewest attacks in the country for years. Since then IS has slowly but surely been picking up its operations. This is not a new offensive but a rather new security norm.

In November there were a total of 87 security incidents in Iraq reported in the media. One of those was carried out by a pro-Iran group which fired rockets at Baghdad’s Green Zone on November 17 which resulted in the death of a child and five others being wounded. That left 86 incidents by the Islamic State. That was up from 85 attacks in October, 82 in September, 64 in August, 61 in July and a nadir of 52 in June. This steady rise in violence isn’t the result of a new campaign which are marked by large jumps but rather appears to be the insurgents just picking up the pace of their attacks.

60 people were killed as a result made up of 14 Hashd al-Shaabi, 21 Iraqi Security Force (ISF) members and 25 civilians. Another 110 were wounded consisting of 20 Hashd, 30 civilians and 60 ISF. The security forces made up 115 of the 170 casualties during the month. Since the spring the insurgents have carried out a war of attrition targeting the government’s forces over civilians. That also means that officers and commanders have been singled out. During the month a police chief in Salahaddin was killed in an ambush in the Baiji district for instance. 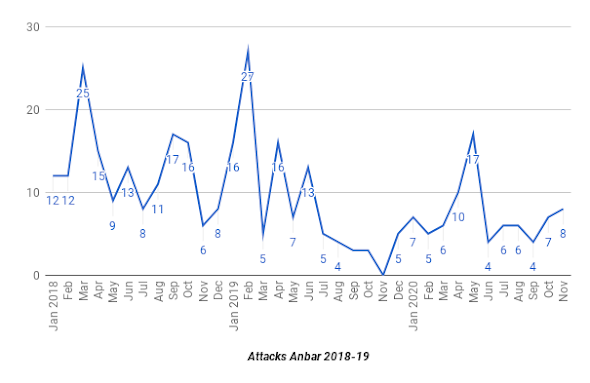 Incidents in Anbar remained at basically the same level as the month before. There were 8 attacks in November versus 7 in October. The types of incidents did change. Usually there are just shootings and an occasional IED in the province. During November there was a home invasion, two checkpoints were attacked, there were two kidnappings, and the militants set up a fake checkpoint and kidnapped more people while killing three police. If this continues into December it would mark a decided escalation in the governorate which is mostly used to smuggle men and material in from Syria. 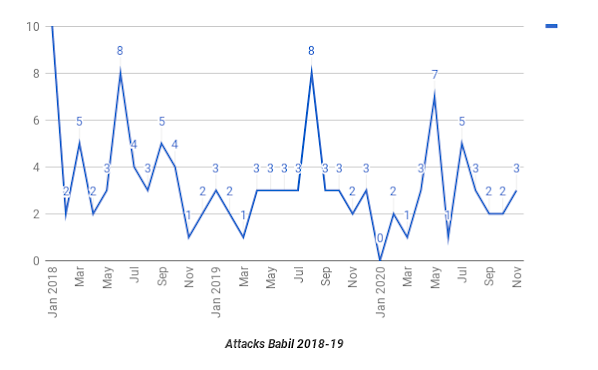 There were three incidents in Babil’s Jurf al-Sakhr in the northeast. This is a large Kataib Hezbollah base so the militants regularly attack the area. 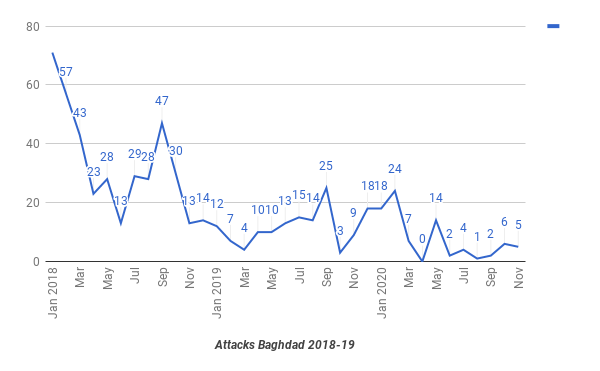 Security in Baghdad remains largely the same. There were 5 incidents down from 6 in October. Two of the attacks occurred in the south and three in the north all in outer towns. IS has given up on infiltrating into the capital itself and now carries out small attacks on the periphery. 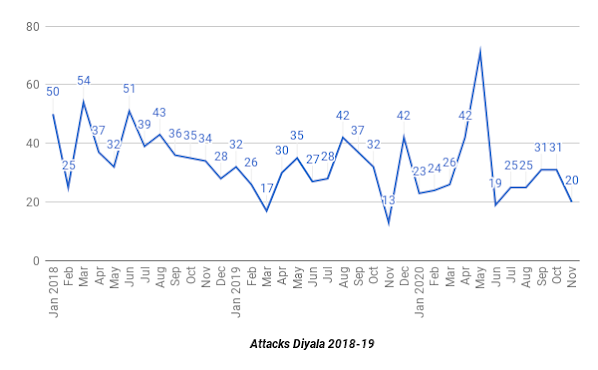 Diyala was the most violent area of Iraq as usual but there was a large drop in incidents from 31 in October down to 20 in November. Almost all the incidents took place in the Muqdadiya district in the center (11 total) and Khanaqin in the northeast (3 total). There were another 5 in the Azim area in the northwest along the Salahaddin border. In October there was only one incident in that area showing that the insurgents are shifting some of their focus to a new region. The Hashd command in the province has responded by building a series of barriers and fortifications around rural towns in Muqdadiya and Khanaqin. These are unlikely to stop IS’s hit and run tactics and the group can simply shift to other areas like Azim.

The insurgents continue to exploit security gaps in the Makhmour district of southern Irbil. This is a disputed territory where there are holes between where the Iraqi government and Kurdish security forces are stationed and patrol. IS has been hitting this area since the start of 2020. 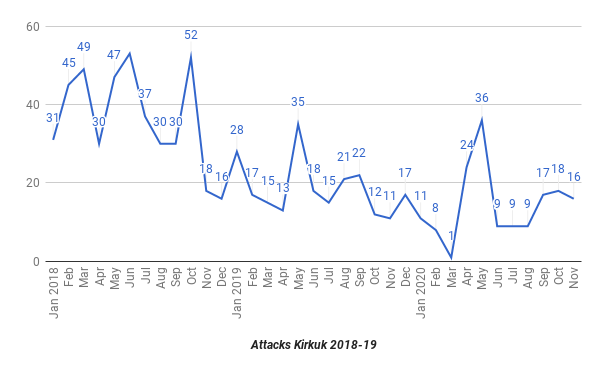 There was also an uptick in serious incidents in Kirkuk. Gun battles with the security forces went from one in October to three in November while attacks on checkpoints went from one to four during that same time period. There were also two kidnappings which hadn’t happened since September. As usual almost all of these occurred in the south where the Islamic State was never expelled. 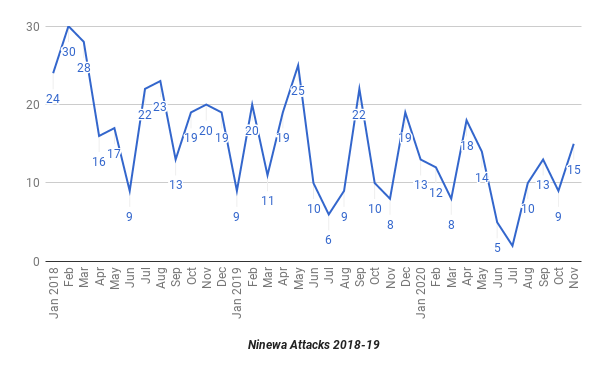 Incidents went from 9 to 15 from October to November in Ninewa. Usually there are just low level but a checkpoint was attacked, some electricity towers were blown up, and three mortar incidents. Like Anbar, Ninewa is mostly used for logistics so this might point to a shift in tactics there. 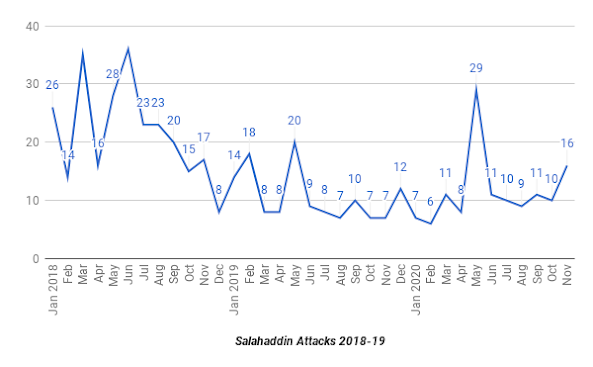 Likewise in Salahaddin attacks went from 10 the previous month to 16 in November. Besides the ambush mentioned before there was also a ferry burned in the Tuz Kharmato district in the east, a district director and a police chief both in the Yathrib district had their houses shot up, and two people were kidnapped and beheaded in the Shirqat district.

- "With the participation of security forces and the people … foiling an ISIS attack on the home of an Iraqi official," 11/21/20

- "The second in a week … the ISIS terrorists launch an attack on an army security post south of Mosul," 11/1/20

Iraq Newspaper, "The District Commissioner confirms … that ISIS has taken control of the international road in Al-Rutba area near Al-Sakar, killing 3 police officers from Al-Rutba and kidnapping a fourth," 11/23/20

Al Maalomah, "A civilian was injured due to an armed attack on the security checkpoint, east of Fallujah," 11/24/20

- "A kidnapped person was released hours after he was kidnapped in a pre-emptive operation in western Anbar," 11/23/20

- "A policeman was killed in a terrorist attack in the Al-Kasra neighborhood, southwest of Anbar," 11/28/20

- “The Popular Mobilization Forces: 22 villages in the countryside of Khanaqin believe in the multiple rings,” 12/2/20

NINA, "A number of security forces and civilians were killed and wounded in an armed attack in Salah al-Din," 11/24/20

- "ISIS attacks fishermen, east of Salahaddin, and the Lion of Amerli is attacked," 11/8/20

Al Sumaria, "A policeman was killed and three civilians were wounded in an ISIS attack in al-Nukhaib," 11/28/20