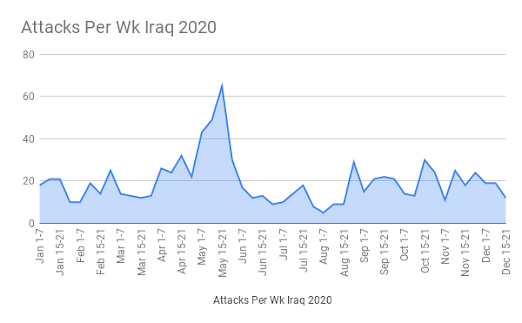 During the third week of December Islamic State attacks took a small dip in Iraq. On the other hand, pro-Iran groups launched three operations showing that the October ceasefire is over.

There were a total of 15 incidents in Iraq reported in the media from December 15-21. That compared to 21 the week before and 19 the first week of the month. Three of those attacks were by pro-Iran groups leaving 12 by the Islamic State.

Pro-Iran groups fired rockets at Baghdad’s Green Zone again on December 20. Some of the missiles fell short landing on residential areas which wounded one soldier. IEDs also hit convoys carrying supplies for the U.S. in Babil and Dhi Qar. Another person was injured in the latter incident. There have been a total of 5 incidents by these groups this month after just one in November showing that the ceasefire announced in October is over. Attacks will likely continue into January as that is the anniversary of the deaths of Iranian Revolutionary Guards Quds Force commander General Qasim Soleimani and the deputy head of the Hashd Commission Abu Mahdi al-Muhandis.

There were two other incidents in Babil. There was a gun battle and an IED both in Jurf al-Sakhr. That is a large Katiab Hezbollah base and is often hit by IS because of the wealth of targets.

Diyala saw just four incidents. All were shootings with three being against checkpoints. Two were in the Muqdadiya district in the center, one was in Khanaqin in the northeast, and one was in Khalis in the west. Muqdadiya and Khanaqin are the main bases for IS in Iraq where the group has established de facto control over many rural areas.

The insurgents set up a fake checkpoint in Kirkuk and burned a man. There was also a shootout and a sniper incident. All three of these attacks occurred in the south where IS was never expelled.

Two bodies of men kidnapped in the Baaj district of western Ninewa were discovered. That area is used by the militants to smuggle in men and material from Syria.

Salahaddin witnessed one infiltration attempt in Siniya which is in the Baiji area and rockets were fired at a Hashd base in the Samarra district.

- "The Popular Mobilization Forces foils an infiltration attempt by ISIS on Al-Siniya island in Salah Al-Din," 12/18/20

- "A person was injured in an explosion targeting an international coalition vehicle in southern Iraq," 12/20/20

- "Security media; An Iraqi soldier was wounded by the bombing of Al-Khadr and rockets fell on apartments," 12/20/20

Al Sumaria, "A member of the Federal Police was killed by sniper fire in Kirkuk," 12/20/20