Review Neighbors, Not Friends, Iraq And Iran After The Gulf Wars 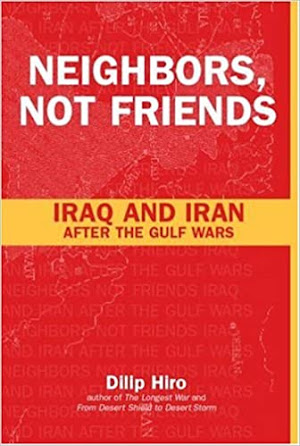 Dilip Hiro was one of the few journalists who consistently covered Iraq from the 1980s to the 2000s. He wrote several books about the country including Neighbors, Not Friends, Iraq And Iran After The Gulf Wars. Half the book was about Iraq and the other half about Iran and their difficulties after their war with each other. Both faced deep economic problems and dealing with the United States. Saddam Hussein had to deal with a decades’ worth of sanctions and United Nations weapons inspections while Iran struggled with its economy and had a constant battle between the conservatives and reformers. These events are the basis of Hiro’s book.

The Iraq section of Neighbors, Not Friends has three main topics, the U.S., the U.N. and the Kurds. Both Presidents Bush and Clinton were committed to containing Iraq. That was done through U.N. sanctions and weapons inspections. Hiro emphasized that the U.S. used both to punish Iraq. It said that the embargo would not be removed until Saddam was out of power and used the inspections to spy on Iraq and create confrontations to justify military strikes. Iraq was actually disarmed but the dispute became over it trying to conceal its programs. The book goes into huge detail about the day to day arguments between Iraq, the inspections and the U.S. Neighbors points out that by the end of the decade much of the region and world had turned against the American policy and were renewing relations with Iraq. The Kurds on the other hand got an autonomous region after the Gulf War, but the two main parties the Kurdistan Democratic Party (KDP) and the Patriotic Union of Kurdistan (PUK) quickly fell out of revenue and power sharing and went to war twice with the KDP even turning to Saddam to punish the KDP. The author believed that the 1990s were a decade of ups and downs for Saddam. He was able to stay in power despite the United States, but its economy was still hampered by sanctions.

The other part of Hiro’s work reviewed how Iran went through a constant pattern of steps towards liberalization that would then cause a conservative backlash, while the economy was troubled. The U.S. was also opposed to the regime. Under President Ali Akbar Hashemi Rafsanjani and Hojatalislam Khatami the main goal was revive Iran after the Iran-Iraq War. That meant economic reforms and opening up the oil industry to foreign investment. Both were opposed by conservatives but the two leaders were able to push them through. At the same time Iran was constantly faced by inflation, devaluation of the currency and the ebb and flow of oil prices. They were less successful politically. Conservatives in the government usually backed by Ayatollah Khamenei constantly struck back at youth movements and their opponents while they were attacked by vigilantes and arms of the government. Hiro presents this as a struggle to establish law and order after the country went through a turbulent revolution and then a bloody war with Iraq. Similar to that country the U.S. struggled with its anti-Iran policy. It imposed sanctions but was often opposed by Western Europe, Russia and China. Neighbors thought Iran was still struggling with how its government and society would be run. It had a division of powers that hindered many reforms and the conservatives worked through the system as well as extralegally to go after the liberals. The rule of law was a work in progress.

Hiro deals with all of these issues in great detail. There is page after page after page on all the back and forth between Iraq, the U.N. and Washington over inspections for instance. That is also one of the drawbacks of the book. It is a great history, but it is all on the facts and there’s little analysis. Still if you want to know about Iraq and Iran during the 1990s this is one of the books to turn to for what happened. You can find other books to find their significance.