Review Arrows of the Night: Ahmad Chalabi and the Selling of the Iraq War 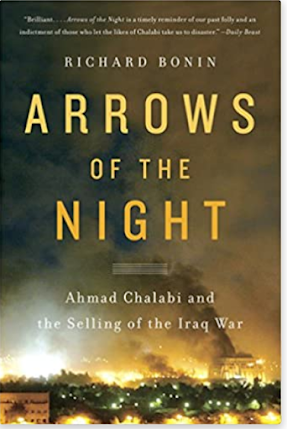 Arrows of the Night: Ahmad Chalabi and the Selling of the Iraq War by 60 Minutes producer Richard Bonin was the second book on the controversial figure. Much of it is based upon conversations the author had with Chalabi. The book highlights his greatest achievement of helping to convince the United States to overthrow Saddam Hussein to his many faults from his financial corruption to his turn towards sectarian politics. The book starts off giving Chalabi’s view of Iraq and then becomes more critical as it progresses.

The start of the book gives the impression that Arrows of the Night will just be an expression of Chalabi’s point of view. It starts with his upbringing in Iraq where his family was one of the wealthiest in the country, were financiers of the monarchy, and part of the political elite. Chalabi’s grandfather for example was the Education Minister nine times while his father loaned money to the Regent, was the Minister of Public Works and the president of the Senate. Chalabi then delves into his version of history where he claimed that the growing protests in the 1950s that culminated with the 1958 coup were the result of resentment at the increasing influence of Shiites in the country and that after the 1963 coup the Baathists killed hundreds of Shiites. As he told the author his plan was to depose Saddam Hussein and guarantee Shiites would have their rightful place to run Iraq. Thus he paints Iraq as having a sectarian past and portrays himself as being the savior of his community. The problem is that this is based upon pure fantasy. The demonstrations and 1958 coup were motivated by the British control over Iraq, the corruption within the government which was ruled by a landed elite, the lack of political reform and the increasing use of repression by the authorities and had nothing to do with sect. In fact, many of those protesting against the monarchy were Shiites who were members of the Iraqi Communist Party. Likewise those murdered by the Baath were not killed for being Shiites but rather for being Communists. Only once did the author push back against any of these claims which gave the feeling that Bonin was simply going to serve as a mouthpiece for Chalabi. Fortunately that didn’t prove true.

The focus of the book is about Chalabi’s unnerving determination to get rid of Saddam. Chalabi dabbled in Iraqi politics in the 1960s but it wasn’t until the 1990s that he became serious about it. He decided that the only way to end Saddam’s rule was to gain the backing of the United States via the media, influential people and politicians and have the acquiescence of Iran. He therefore went to Washington D.C. and Iran to achieve his goal. He first gained the support of the CIA, but after they grew tired of him exaggerating his operations and attempting a revolt in 1995 he then moved to the budding neoconservative movement. Many of those figures gained positions within the Bush administration and argued for not only the overthrow of Saddam but having Chalabi take his place. He also developed extensive contacts within American newspapers and television which allowed him to write opinion pieces, be interviewed, and eventually present a series of Iraqi defectors who claimed Iraq had WMD and was behind 9/11. He also went to Tehran and won their backing by convincing them that the U.S. was serious about invading Iraq, that it would not then turn on Iran and that any post-Saddam government would consist of politicians friendly to Iran. While Chalabi couldn’t have accomplished these feats if not for people already interested in Iraq, he played a major role in shaping public and political opinion in both the U.S. and Iran. No other individual came close to pushing forward the invasion of Iraq. Chalabi faced many setbacks upon this path such as his falling out with the CIA and becoming a divisive figure in America, but he never gave up. It’s a rare person who could fulfill such a dream.

Bonin is not just a cheerleader however as he points out Chalabi’s many faults and constant troubles. Chalabi for instance was at the center of a series of scandals. In 1989 his Petra Bank in Jordan was closed which caused Chalabi to flee the country. The book doesn’t go through all of his crimes but it does point out that the bank faked its books and made a series of bad investments that meant it didn’t have anywhere near the amount of money it claimed. Next, the Iraqi defectors his Iraqi National Congress presented to the press and U.S. intelligence agencies all proved to have pushed false stories. Chalabi himself thought Al Qaeda attacked the U.S. on its own, but that didn’t stop him from finding people who said Iraq was connected to 9/11 because it furthered his strategy of pushing the Bush administration towards war. Next in 2004 he told the Iranians that the Americans had broken one of their top secret codes which led the U.S. to end all their funding for him. Finally, Chalabi turned out to be not an extraordinary Iraqi politician but instead just like the rest placing his allies and relatives into powerful positions and enriching himself. He was accused of printing fake money to exchange for the new currency that was issued in 2003, and that he received a commission for all the transactions at the Trade Bank of Iraq which his nephew ran, and that he smuggled goods in from Iran. He also aligned himself with Moqtada al-Sadr who fought against the U.S. and Iraqi governments and even encouraged him in 2008 to resist Prime Minister Maliki in the Charge of Knights offensive in Basra to bring down the government in the hopes that Chalabi could become premier. The book points out that in all of these situations Chalabi would always portray himself as a victim of a political plot by his opponents. He also presented himself as a democrat who would transform Iraq. In truth, he was corrupt, a schemer, and sectarian. Bonin notes that when he finished the book in 2010 Chalabi found himself living in a villa in Baghdad with little standing anymore. Kenneth Pollack of the Brookings Institute told the author that was the fault of Chalabi’s personality claiming that he was too Machiavellian playing too many people and ultimately paid the price.

Arrows In The Night shows that at the end of Chalabi’s career he’d given up any kind of pretext about being a champion for Western democracy and reforming the Middle East. Instead he was a completely sectarian politician interpreting history through a Shiite lens and claiming that he was the champion of his community come to liberate it from Saddam. At the same time it highlights his indomitable drive to overthrow the Baath regime despite all of the setbacks that he faced. He never gave up and used whatever means were at his disposal. He epitomizes the phrase the ends justifies the means. At first, the book seemed like it would simply be a vehicle for Chalabi but it proved to be critical of his many missteps and provided a good biography of this important figure.